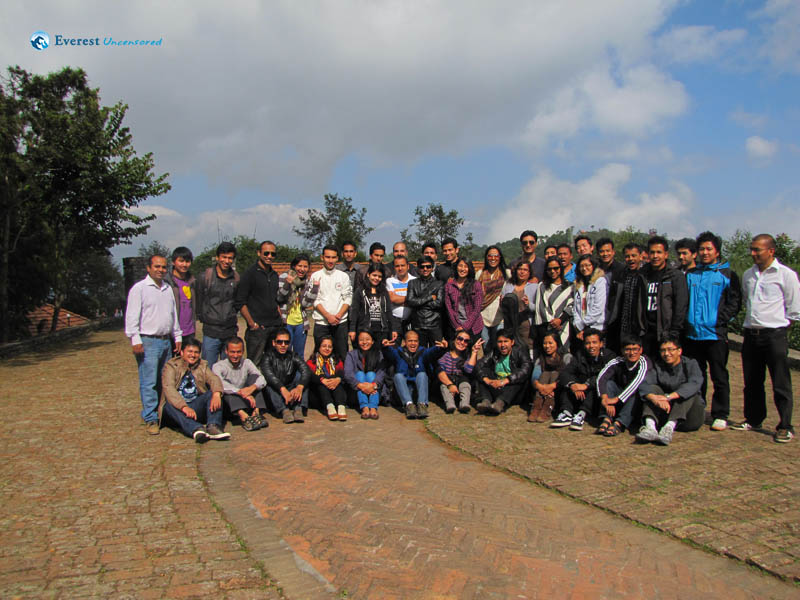 Our first outing in Deerwalk started with the journey towards the most attractive place on the outskirt of Kathmandu, Nagarkot. One of the most scenic spots, renowned for its sunrise and sunset views of the Himalayas; it is a common holiday destination for tourists and the residents of Kathmandu.

Home for beautiful views of sunrise and sunset through the intricate Himalayas including Everest, our destination was “Club Himalaya Resort”. A short trip from from the bustling city of Kathmandu began with excitement.

Home for beautiful views of sunrise and sunset through the intricate Himalayas including Everest, our destination was “Club Himalaya Resort”. A short trip from from the bustling city of Kathmandu began with excitement. We were group of 53.

It took us two hours to reach our destination, experiencing the twisty turns on the road and amazing views. Few minutes after getting refreshed in the luxurious hotel room we headed towards the Nagarkot tower. We must point out that the hotel was very peaceful and extravagant.
As organized, it was Snacks time, and, with all the excitement, we were starving. We had Pakodas, Chicken Fry, French Fry, Badam Sadeko and Prawn crackers with drinks. Don’t get us wrong, we had drinks ranging from Coca-Cola to Fanta to Beer, Whisky and Wine, and perhaps the Tequila that Rudra dai sponsored: D. It was fun to hang about with people who were consuming hard drinks, provided we had never seen such funny side to any of us.

It hurt to see Ekta sitting aside watching others playing and enjoying our team building game, while she stuck with bandage on her foot. It was the SNAKE GAME, where there were maximum of 7 -9 players lining in a single queue where all except the one at the back were blind folded. The last person would guide the team to drop ‘a beer can’ that the person in front holds into the bucket put at the finish line. This was to be done without speaking a word i.e. just by means of tapping shoulders from person to person. There were people cheating while playing the game but all we could do was to cheer up. The game was a big fun and everyone enjoyed. After photo sessions and jumping about, we headed towards the resort.

Although we were tired and had our feet hurting with an hour walk to return, we could not take our minds of the evening theme our organizers had planned for us. It kept us fresh as daisy…ummm…what kept us? – Yeah – “Hot in winter”. Girls wore red for the rest of the night and the boys wore black/white. Everyone came out with their stunning looks and trust me the guys could not take eyes off the ‘ladies’ :D. Our team looked amazing. We had the unity of being together no matter what. In an international platform as such, we not only displayed our professionalism but our fun side that proved not all Data workers are nerds. All 53 agreeing for the crazy theme kept us going. We had a variety of decent food and it was a pleasure to have such sumptuous dinner hearing melodious Nepali folk songs. The hall, the surrounding, the environment, was buzzing. Anyone who would have seen us then, would have agreed on feeling the unison and that the team were having a nice time.

We all had our dinner by 8:30 and after resting for some time, we headed towards the bar. Oh.. sorry, not for drinks but to burn the dance floor. We danced and danced with maniac steps till the clock stroke 10:30. We had super fun while dancing especially singing a song teasing our friend Agma saying “O AGMA” in the ‘O BALMA’ Song track. ;). It was one hell of a fun. Our DJ was none other than Awanish dai and trust us when we say, he is a terrific dancer himself. Not to forget, Sagar dai had some moves to show too. The nostalgic moment now make us realize that it was a very energetic environment we created. Being away from all the codes, scripts made us relax whilst having our heart pumped with loud music.
We were not finished then, because we had our music band perform for us. Not in a stage, but in a room, where almost all the 53 of us joined and sang our heart out. Bipul dai and Amir lead the group, Sawan dai was our Rapper and all of us the followers. We had three phone calls from the reception, must say due to the noise we were all making. To their despair we changed rooms every time we were suspected and they could never point any of our rooms :D. There were few who went ahead to play cards, few who stayed up late to just talk with friends and spend time and there were few who went for a doze.

Next day, as soon as we opened our eyes, after the max 1 -2 hours sleep; we had that sad numb feeling that this outing will soon be over.

Wished we could stop the moment and create memories for few more days.

Wished we could stop the moment and create memories for few more days. With that feeling, we woke up and headed for breakfast. It was rather a brunch as we had variety of food provided and we stuffed ourselves with the luxury. Following the lushness and staying in a five star hotel, not everyone was interested to go for a spontaneous hike, so there were few who went ahead with the plan and others who relaxed and took advantage of the other refreshments provided by the resort.
During the hiking Surendra dai decided to leave the regular way and make our own way inside the jungle. It was risky, yet fun, provided the sceneries were outstanding. After one hour we got the regular way and headed towards the hotel. After few hours of fun we checked-out from the hotel around 12 and bid good bye to Nagarkot. The excursion was over and we were back to our normal life, full of responsibilities.

To sum it up, the team really had a great time. The entire trip was no less than AWESOME; a lot of sweet memories and informal networking with fellow team mates. It became one of the most memorable time spent with new friends in a new environment. New hires were given an opportunity to get along with all the team members and seniors. For others it refreshed and boosted their enthusiasm. All thanks to our organizers for the wonderful trip.