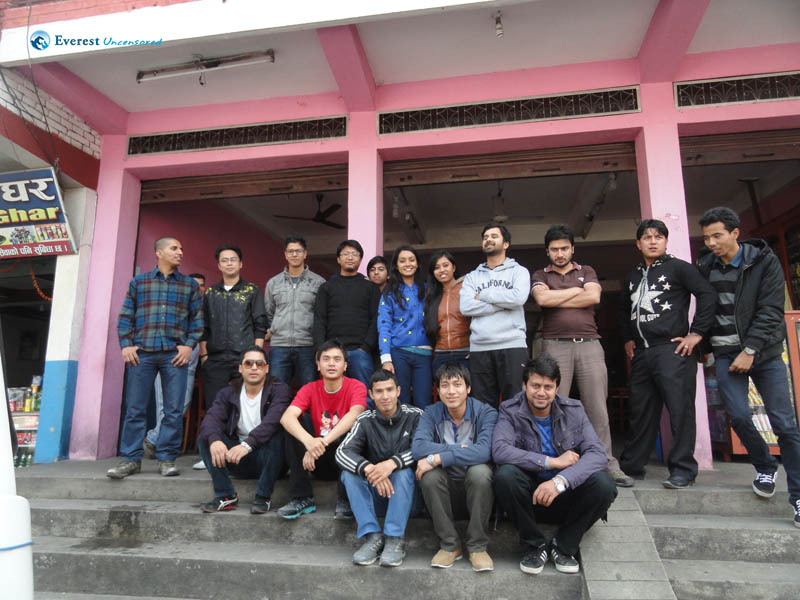 Nitish Dhaubhadel
Who won’t be energized and thrilled when he/she gets a chance to go to a “Deerwalk Outing”. My Bags were all packed a day ahead as I could not contain my excitement.
Though it was chilly cold, we headed towards our destination from our office premises at around 7:30am as the journey was long. On the way we picked up rest of the team members on different stops and I could see all of them being very excited for the journey.
Our first stop was the Siddha Gufa (Cave),one of the biggest in South Asia which was the highlights of our outing up there. After 30 min of walk we finally reached the Shiddha Gufa and our exploration started.
Though I found it to be difficult and torturous at the beginning, the magnificent and exclusive view inside the cave made me forget my pain. Since this was my first cave exploration, I experienced the thrill that was never experienced before. Guide also explained some natural engravings made by erosion of limestone and I was amazed by the creations of nature.

In short we laughed, we danced, and we enjoyed every bit of it.

Our next destination was Bandipur and we had two options to reach there, either by bus we were travelling on or by hiking. Some chose the easy way i.e. bus and some choose difficult but of course exciting way i.e. hiking. Being an adventurous lover I undoubtedly chose hiking which was more exciting. The hike was memorable one as the beauty of the place was just spellbinding.
At around 4:45 pm we all tired hikers reached the resort (Bandipr Village Resort). Though tired we freshened up quickly to join our colleague in the garden and had some snakes and barbeque. We filled our tummy with good food and our mind with beautiful background music. In short we laughed, we danced, and we enjoyed every bit of it. Lastly the dinner was served at around 9:30 pm. As we were tired by the busy day, we ate our dinner and headed towards our room for a long good night sleep.
We woke up early next morning and gathered at the garden area for breakfast. It was already 9:45am when we finished our breakfast and we headed towards Tudhikhel for our team outing games. We created the game to test our colleagues mental, physical and team coordination skills. First the team was divided into two random groups and given the name “TEAM RED” and “TEAM GREEN”. There were 3 stages in the game. One must complete the previous stage to move to the next stage. The first stage tests the team’s mental spirit as the team had to create 5 different words from given jumbled up alphabets. The second stage tests the team coordination skills as team passed the ball to every player before scoring in the ring. The third game tests the team physical strength where all the members from the team ran towards the sticks and spun 4 times by putting their respective sticks in their forehead and ran back to the starting line.
Team red was finally declared the winner of the challenge as they managed to complete the task given at first. After completing the game we roamed the Bandipur city for an hour and headed toward resort for our lunch. We checked out of the resort at 12 and headed towards Kathmandu.

Anish Kumar Pradhan
16th Nov, all thanks to co-ordinators, I was very excited for the outing to Bandipur. The journey began at 7:30 am from Deerwalk. We stopped at Naubise for breakfast and Mugling for lunch. It was around 1:30 pm when we reached the checkpoint to Siddha Gufa. We entered the cave with a guide. After an hour tour we exited the cave.

I saw beautiful views of Chundi Khola and Marasyangdi Khola meeting each other.

On my hike uphill, I saw beautiful views of Chundi Khola and Marasyangdi Khola meeting each other. The Barbecue started from 5:10 pm with refreshments.. At 9pm, we had dinner and headed back to out rooms. In the morning we saw some breathtaking views of the Himalayan ranges, Langtang peak in the east to Dhaulagiri in the west. From the nearby hilltops, one could see as far as Manakamana and Gorkha in the east to the great Chitwan plains in the south. For the team building game, the group was divided into two teams – TEAM RED and TEAM GREEN. The games were a lot of fun and the Team Red was declared the winner. Thereon, we went back to the resort, had lunch and returned back to Kathmandu.

Shilu Shrestha
It was all dark and all I could do was hear and all I could hear was our guide dai: “tapai yeti bela koslai samjhidai hununcha?” such a simple question but for a minute I wondered, I started recollecting my memories.
Bandipur was not a new place for me, but the excitement was of being there with new companions.
Our trip started off early at 7:30am, most of us gathered at the Deerwalk premises while few including me joined the squad at Kalanki. Our first stop was Simle, Dhading for a quick yummy breakfast. Singing to the tunes of guitar, getting to know each other and yet grooving along the fine music, our bus ride was just filled with joy. After heavy Thakali lunch in Mungling we were all set and prepared for the first activity of our outing: the Hike. For me hike was the most awaited moment in this outing as I had heard a lot but hadn’t been there: to Siddha Gufa. This hike clearly separated us into groups of well fitted active hikers, the active yet casual hikers and the non hikers 😛 .Thankfully I fitted in the middle being active casual hiker 😀 . 30 minutes of continuous walk uphill and we reached to our destination Siddha Gufa. We all gathered took a few minutes break and went into the cave. Renowned as being the biggest cave in Asia I was thanking this trip which brought me here; indeed it was the biggest cave I had ever seen and its depth didn’t seem to end.
As we went deeper and as the darkness became more prominent; I was brought back to the question. It made me look back at my life indeed, that moment gave a little chill to my soul and I believe it was quiet the same for all of us there.
400+ meters deep, much more to go, however as the condition of cave was not in our favor we moved back; back to continuing with our trip. We were all tired and wanted to reach Bandipur and freshen up. But some of us wanted to hike some more, so we separated into two groups and headed to Bandipur from a different route. It had started to get dark and cold, we could see the feast had already begun with bonfire, music and warm BBQ. The night seemed never ending, everyone was so much into the moment, dancing around, talking out loud; enjoying the atmosphere. We wrapped up the long day with some card games.

Next morning the view was not as clear as I had expected. The Himalayas were completely hiding behind the clouds. However this day the excitement was all about team building game. Nitish and I had prepared some games which would test mental, physical and team coordination of the players. The teams were divided into two: RED and GREEN. Basically it was a relay which started off with a word game; then a team touch and goal football game and finally team relay in which one team mate had to run, take a scroll, bend and rotate 4 times then run back and tag other teammates. Finally team Red managed to be victorious by completing all three tasks beautifully. The outing was near its end, with few sightseeing and a full stomach we headed back to ktm.

Overwhelmed and pleased, are the words that describes my emotions; having been spending just few weeks in Deerwalk I was a part of such a delightful journey and I am all pumped up for more that’s in-store.