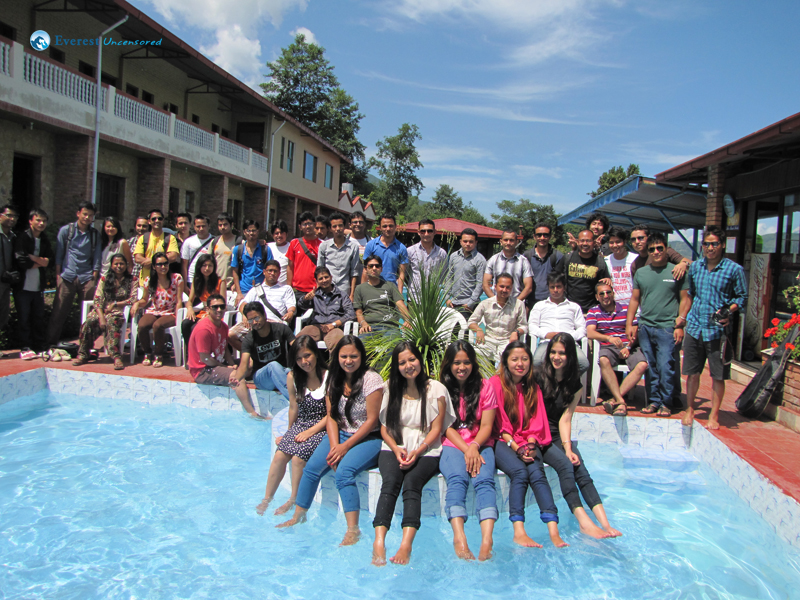 The Expectation
We were heading for a two days outing, away from the comfort of our home and predictable daily routine of the office life. The purpose of it was team bonding while refreshing both body and mind. Although we spend a lot of time together with our fellow QA team members, we rarely get an opportunity to know each other in a more personal level. Initially, I thought I knew QA members well enough, as I work with them day to day, until the team building outing, which changed it all.

Outing Activities
The location for the team building outing was Khushi Khushi Hotel in Matatritha, located near Mache Gau,. We left office at around 12:15am, and as soon as we reached the resort I got to my room and was glad to have the two Prakashs as my roommates. As we saw the swimming pool, I think all the guys had one thing in their mind, “to dive in”, and we did just that. The snakes, despite their best efforts couldn’t keep us away from swimming. After taking some snacks and drinks we played a team building game called Lord of the rings. The team was divided into two groups forming circles holding hands. The hola-hoop was to be passed around through the group without breaking the hand held bonds that held the circles. Whichever group completed the circle first won, my group did it. After a short break, it was time for the next surprise team building game called Pass the parcel. For that we had to pass around a gift-wrapped parcel and when the music stopped, who ever had the parcel, had to do the activity written on the parcel. It was fun as we were pushed out of our comfort zone and have to perform unusual things like dancing, acting like a baby, a drunkard, a comedian etc.

We had BBQ session and just to flare things up, we had a surprise birthday celebration session for Sumira, Brisha and Rajesh with some fireworks. Followed by that we had cake cutting and gift distribution sessions; hope the birthday boy and girls liked their gifts! BBQ was so so, but the real activity that enticed everyone was yet to come, the dance session. I was excited to see that most of the people participated, and to catalyze things up we had some drinks as well, it was amazing how some people managed to dance from the start to the end, non-stop. They got more wet with sweat than the people in the swimming pool!

Then we had a nice dinner, there was voting session at the dinner for the best male and female dancers. We had a surprise wildcard winner, Awanish. He won the best male dancer and Sunita was named the best female dancer. After dinner people went about their own playing table pool, table tennis, chatting / gossiping, singing, watching EPL games and of course cards. We had bingo session in the morning, which was exciting as there was a hope to win every time a number was picked, all thanks to Bibek Lal for making it exciting with his theatrics. After a group photo session, we headed home. The outing ended with a splash, as photos were taken by the pool side, and people were slashing water at each other till the end. Thanks to the outing coordinators – Sunita, Brisha, Merina and Bibas for organizing this spontaneous yet well managed event.

What I will always remember from the outing
The experience was totally unexpected as I got the chance to see some non-stop dancing, some acrobatic dives, great accuracy at the pool table, swimming with snakes and unexpected personalities. After seeing my fellow QA members in their element I will conclude that one cannot judge a book by its cover., The individual personalities in the team was clear to see and I like them more after having experienced it.

For now we have plenty of pics to remember the outing by. I can’t wait for the next trip. Words can’t explain my experience at the team outing. The thought that kept running through my mind the whole time was “WOW”.

“Awesome” I would say, if I had to sum it up in a single word, but since my editor wouldn’t let me escape with that, I might as well add up few lines to this blog. Well, the outing was fun, balancing the bright sunny day with sips of cold Tuborg, and participating in the entertaining team building activities then after. It was followed by moves on the dance floor with fruit punch on one hand and the other doing some break dancing contortions. Not to forget, the Braves (including I) who swam in the pool in spite of the snakes while the QA Beauties clicked away to glory with modeling poses, that is until a frog spoiled the party. Come to think of it, the frog might have been a prince in disguise, but he wasn’t getting any kisses that weekend.

We were on our way back home the next morning after a satisfying Sunday brunch, a round of Bingo (which I managed to make it longer than some of friends would have wanted) and a lots of photos to update our face book profiles with. Thanks to all the wonderful people who organized and participated in this event.

It’s been just a month at DW, and I got an opportunity to organize a QA team outing. I love to organize and manage events; therefore I grabbed this opportunity to know the QA team better. I confess it was a herculean task to manage a team of 46 members, that which is the QA team. On one hand, there were only a few people with whom I had interacted before the outing, and coordinating an event to everyone’s liking is quite daunting a task even to the most professional of event managers. But, my two fellow organizers, Sunita, Brisha and Bibas worked hard and cooperated with me to make this QA team outing successful. I am very thankful to my organizing team (Sunita, Brisha and Bibas) for their overwhelming support. I would also like to take this opportunity to express my gratitude to all QA team members for their unrestrained enthusiasm shown throughout the event.

Although outing lasted for a short time, I got a chance to interact with all the QA members from production and services of DW. We had quite a lot of fun; a vibrant euphoric environment was created while singing, dancing and doing everything else besides that. I realized that this kind of outing is a perfect platform to share our experiences and know each other in a more personal level. Overall, I enjoyed each and every moment of this excursion, be it organizing activities, playing bingo or meeting new people. Now, I know how a DW outing is like. 😉

Life is not only about work, it has to have moments of entertainment and fun. I joined this company as an intern just 3-4 weeks ago, so the outing to Khushi Khushi Hotel was quite an experience for me. It was Saturday afternoon, around 12:30 am when we left our office premises for the outing. Upon reaching the resort I couldn’t help but be in awe of the place and the sceneries it allowed off its vantage location. We started swimming, singing, dancing and capturing the moments through our cameras.

I had the chance to amuse my fellow workers playing the flute during the trip. I would like to thank the organizing committee for coordinating such a great excursion. It has helped me know my fellow members more closely. Such Team Building programs should be conducted more often as it helps make the bonds between employees stronger while refreshing the body and minds that need repair from the hectic office hours.