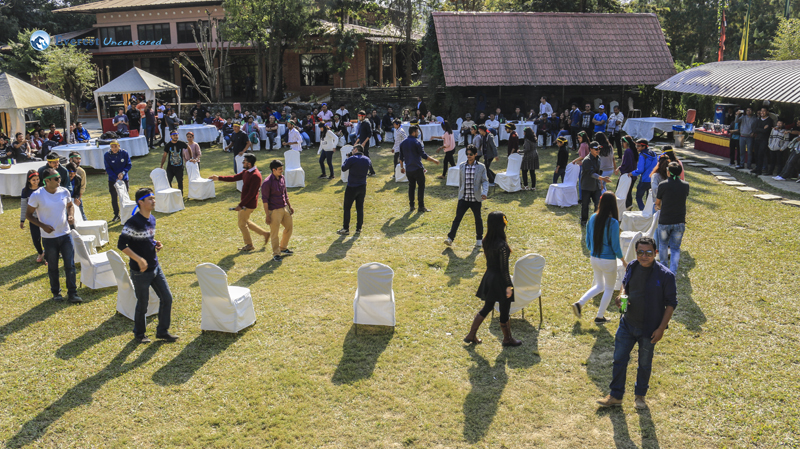 The term “picnic” usually conjures up the image of a quaint family gathering – a blanket on the grass, some sandwiches in the hamper, kids chasing after butterflies. I was expecting some larger version of this when I joined Deerwalk last week for its annual company picnic. Instead, the van dropped us off at a beautiful resort owned, rumor has it, by a Bhutanese princess.

Since I teach English at DWIT,

I don’t know too many people at Deerwalk Services

, so in an effort to avoid socializing I set out to explore the resort. I hit a dead-end when I got to the neighboring golf course, so I headed back to the party just in time to hear my name called by the emcee. Apparently I’d won a prize in some (rigged) lottery. But the crowd wasn’t about to let me off easily; when I went up to grab my earnings of chocolate and tickets to the resort pool, the emcee announced I had to earn it first—by dancing. Luckily I’d picked up some local moves during Tihar, and I think I hopped around rather gracefully.

Now that I’d sufficiently embarrassed myself in front of an audience of strangers (albeit sympathetic ones), I eagerly joined the party. A few beers helped, I admit. Soon enough everyone was dancing — and not shyly and awkwardly, the way they do at American office parties. We took a break for some contests (tug-of-war, musical chairs, a dance-off). People were taking it seriously! Nepalis might dance a lot better than Americans, but they can be just as competitive, I realized. But soon enough we were back to the dancing, and even the day’s losers were happily bopping away.

I was invited to Deerwalk Picnic 2016 which was hosted in a beautiful resort located in Grand Norling Hotel. The resort was an oasis away from Kathmandu; the garden was neatly designed to have an Asian atmosphere featuring bamboos with the white tents and table settings which were aesthetically pleasing to our eyes. Picnic started in the morning and lasted till the late afternoon. At first, I was very concerned to participate as I was the only one from Deerwalk Sifal School attending. I only knew handful of staffs from Deerwalk Services. To my surprise, I was proven wrong to worry at all.

The staffs from Deerwalk Services were so approachable and friendly that I made new friends quickly.

I ended up participating in games like tug of war, musical chairs, and even dancing! I was even taught how to dance salsa by one of the kind staffs. Before I realize it was time to go home. Thank you Deerwalk Services for inviting me to the picnic and the team! I had a wonderful time.