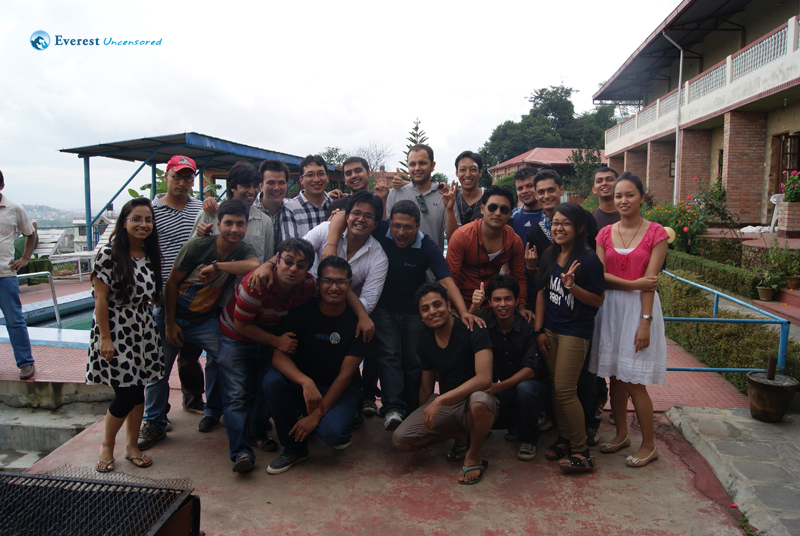 Most of the us might have heard people saying “programmers have no life”. Though programming is my passion, I decided to go beyond the work life routine and take some time off enjoying the beauty that nature had to offer while getting to know my fellow workers in a more personal level. The two day outing to Khushi Khushi Hotel in Matatirtha was decided as the venue and what followed was more fun than I have had in a long time.

The outing was managed by Ramesh Parajuli and Biswas Lohani. As per the schedule our office bus left at around 11:15 am. We picked up few of the guys along the way as we made our way to the Khushi Khushi Hotel. We had a lot of fun in the bus while heading to our destination. Since the day was sunny we felt hot inside and started drinking some soft drinks to quench the thirst. We reached the resort at around 1 pm and the first thing we saw when we got there was the clear blue swimming pool with a beautiful gardening on either sides of it. We couldn’t stop thinking of diving in, and consequently most of our team members had a swim.

One of the major purpose of this outing was to have a team bonding. A game can be a good way to build a bonding among team members. Taking this thing into consideration we played games like “spoon race” and “shoot a beer jar”.The day was getting darker and the cold chill of the night was about to embrace us. Then we had a nice and tasty dinner. If you are visiting a new place for a weekend, then hospitality and service are the first things to consider. The people in Khushi Khushi Hotel were so generous and humble that it felt like their motive was not just limited to making money, it was more about showing humanity and generosity.

After having a sweet dinner, we gathered in a circle and started singing songs with live guitar music. Everyone was asked to sing a song they loved the most. We had to put aside our inhibitions and realize that inner singer in us and sing our heart out. The world is much more fun with people of varying interests and beliefs. Despite my skepticism, in my outing I hung out with senior programmers, project managers, and team coordinators. It was surprising to see the people who are so concerned and sincere about there job could also be so much frank with their juniors and fellow workers. My life and experiences are so much more enriched because of it. Spending so much time with people whom you look up to is a learning lesson in itself.

I grew up traveling a lot and had a lots of memorable moments in my past and this outing with my fellow “Makalu” team members is right up there with the best. As soon I got home form the outing, I updated my status in my facebook wall and wrote, “my new job is like joining a new college . I am loving DW”. I instantly got 41 likes within an hour which meant I was not the only one who felt that way.

It was my first outing since I had joined Deerwalk and was a wonderful experience. We had planned to start our journey early on 28th September, Saturday. We had to pickup Jo Anne and Jeff Rick from their hotel, which we did. We were welcomed in a unique way with a can of beer in the bus. As we arrived at the Khushi Khushi Hotel; I saw some of our friends were already in the swimming pool. They were busy taking photos in different swimming poses. Then we were ready for the team building activities which included spoon marble race and vodka bomb. We enjoyed it for an hour before having snacks. I enjoyed playing pool with some new friends. Despite our first attempt to have a short walk was canceled due to rain, but we did not give up. In the evening, we the genomic team had a short walk with Jo Anne which was another memorable event. At night after dinner some of my mates were busy with cards and some went for night hiking .I was enjoying some melodious Nepali song by Narendra Maden and Kapil. Some friends of ours joined us with their dancing which continued till late hours of the night.

Next day we had little to do .We sat on the side of the swimming pool viewing the natural beauty and the Kathmandu valley. Some of the guys were already busy with cards and drinks. Now, the time to end our trip had come but half of the guys were still at the hotel till the evening. It was my first experience of an outing after my professional life had started, and I shall cherish the memories made on the day. Thanks to Ramesh and Biswas for coordinating the event so well.

Visiting someplace new forces one out of the daily rut that he/she is in and this can really help the person appreciate life more. With that in mind, we started planning for Makalu+Genomics team outing. After all, everybody deserves a break from all the work pressure.

It was a long time since the planing for team building had begun, everyone was involved in deciding where to go? what to do? and when the best time was? So, after all the discussions and brainstorming the venue was decided. It was to be Khushi Khushi Hotel located, located 10 Km from Kathmandu. In the morning of 28th September 2013, we headed for our destination. We picked up people on the way and reached the resort at 10 am. As soon as we were there, everybody was in the pool. We did a couple of team building activities. We played marble and the spoon games. It was kind of a child’s game but everyone was super competitive to win that Toblerone Chocolate. We had snacks after that. Then, there was a brief drizzle. It was a little chilly so we stayed in and of course, we played cards! After dinner at 8, we stayed out by the pool. The view of Kathmandu valley from up there was absolutely breathtaking. It was just lights on a dark background. In the night, we enjoyed good music. We have pretty good singers and guitar players on our team. Yeah…. to that!

The next morning, we had breakfast and half of the team returned to the valley while the rest of us stayed late for some more of that gambling action.

Now that I look back, the team outing was a lot of fun with booze, swimming and gambling. I had a good time and I am glad that I got to know a lot of people on a personal level. And as Biswas always said, we actually made it LEGENDARY.