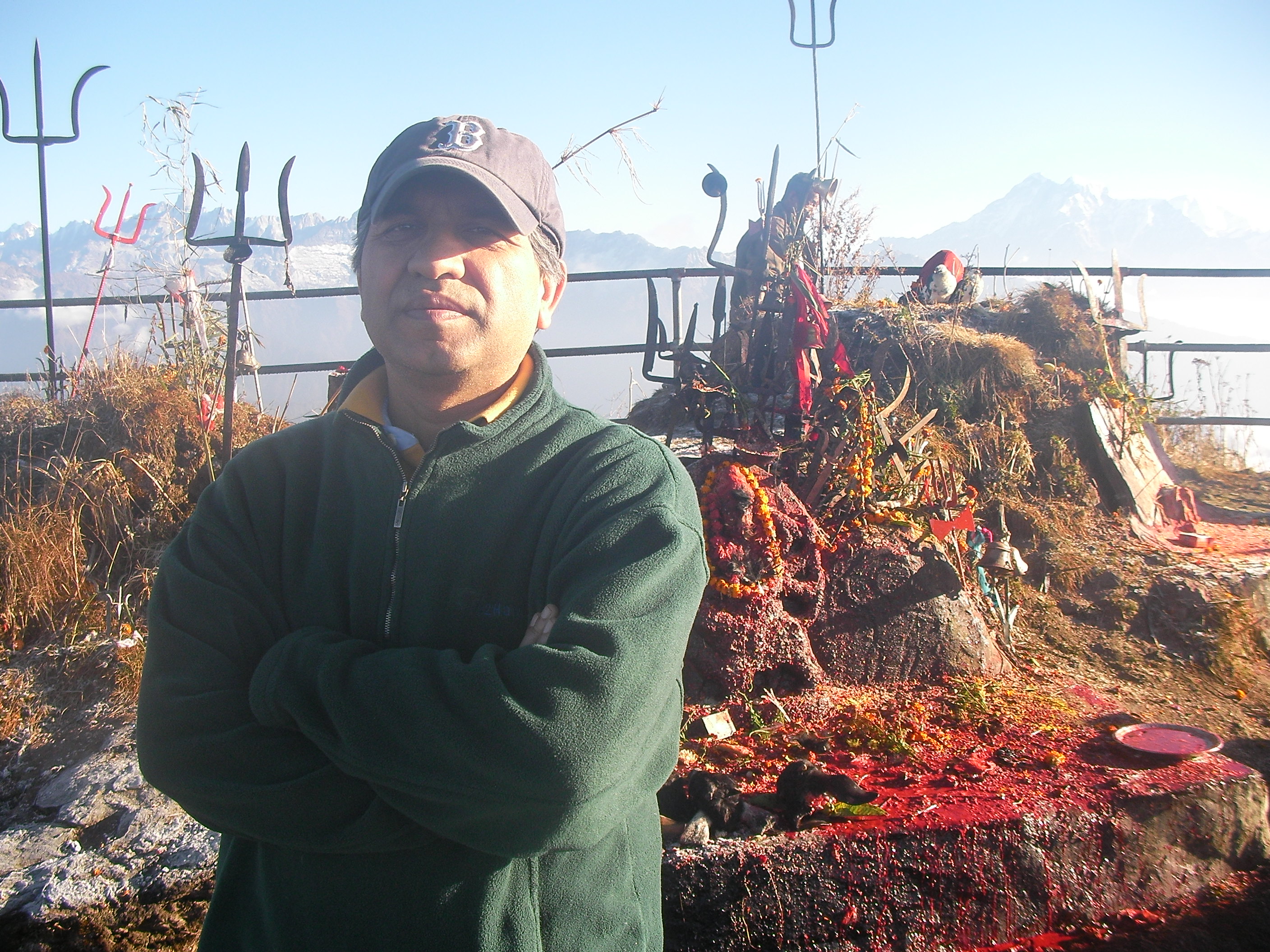 The date was the 14th of November, and the Deerwalk hiking crew was preparing for yet another adventure. We set off from Baneshwore in our beloved “Deerwalk Yatayat”, headed for Charikot, with our final destination being Kalinchowk at a height of 3788m. As we progressed, we started encountering beautiful, scenic landscape. During the drive, we sang along to tunes “Munni badnaam hui..” and “Mutumathi Dhungarakhi ….”. Our first stop was at “Sharmili ko pasal” at around 9:30 am where we had breakfast. We then headed to KhadiChowr. You would be forgiven for thinking it was Khasa, what with the Chinese goods galore. From there, we headed to Mudey, a small bazaar at the top of a hill.

The weather was foggy, and promised rain. At around 12:30 pm, we reached Kharidhunga which was shortcut and easier way according to driver dai. At around 3 pm, we reached our first landmark: Trishul dhunga. About two hour into the ascent, it started pouring; those clouds from earlier coming good on their promise of precipitation. We were not prepared for rain, as this was November, and none of us had thought to bring raincoats or boots. However, we persevered through the rain. With the rain and forests around us, it felt that much more adventurous. After Trishuldhunga, there was descent which ended at Bulbulekhola, our second landmark. After Bulbulekhola, the climb became steeper and the trail extremely slippery. After struggling with these conditions for a few hours, we got to the top of the hill at 6 pm.

We were closing in on Kuri, our destination for the night, but the light was fading. Cold, and in pitch darkness, we trudged on. We could see the lights of Kuri. We eventually got there at 7:30 pm. Diki didi of the Diki hotel served us hot JhwaiKhatte, Chhyang and tea, which warmed us up and made us forget the woes of the day. We ate dinner at 9:30 pm and then slept the night away.

‘A keta haru utha’, cried Rudra bright an early. We emerged bright eyed and bushy haired, greeted by a morning that was just as cold as the night before. After drinking some black tea, we started towards the temple. It was 7:00 am when we reached the temple and alerted the goddess to our presence by ringing bells. Kalinchowk is an immensely beautiful place and deserves to be visited by everyone at least once. A beautiful panorama of Annapurna, Lamjung, Manaslu, Ganesh Himal and several other peaks greets you as you stand on this hilltop situated at exactly 3788 m. After offering our prayers, we began our descent. We had some noodle soup and tea for breakfast and Diki hotel once again, where we learned it would take us roughly 6 hours to get to Charikot.

Barring a small kid who couldn’t seem to resist throwing stones at passersby, the descent was relatively uneventful. After stopping at Deurali for lunch, we continued and reached Charikot at 2 pm. However, the final group joined us at 6pm. While waiting, we decided to go to the “Dolakha Bhimsen” temple near Charikot. At 6, after the last of our group arrived, we headed out for Kathmandu.

All in all, the hike was a great experience for us all. We had great stories to tell and wonderful experiences to share. All of us were really pleased and felt better for having made the effort. We hope there will be many more hikes and much more fun!

This was my first hiking trip maybe after a break of 25 plus years and so I was quite apprehensive about whether I could finish it or not. Once on the bus, however, there was no turning back. This hike not only gave me an opportunity to reconnect and spend some time with one of my best friends, Rudra, who had been persistently trying to get me on board his team both at D2 and now at DW; but also gave me an opportunity to reconnect with what is so good about our country, the pristine beauty and the good-natured character of the people of Nepal which you really have to look hard to find in Kathmandu.

The trail from Khari Dhunga to Kuri, Kalinchowk was fabulous and the steep climb towards the end in almost pitch darkness, rain and chilly winds will be memorable. In the final hours of the hike on the first day it seemed that my mind and feet were out of sync. The former kept saying “walk straight” but the latter kept replying “no way”.
Finally, the enthusiasm with which some of our young engineers took the hike gave me hope that much can be accomplished at DW in the years ahead.

I was in the more energetic group with Sachin and Sumit running along. About and hour and a half after the start, we reached Trishul. After we reached bulbule khola I got separated and walked alone for the next two hours. It was cold and pitch dark. I thanked my gods for the torch I had. I did not know where Kuri was, or where Sachin was, woe to the NTC network. I had given up hope in food or shelter when I saw a light blinking back at me from Kuri. I lived!

The greens and hills of Kalinchowk reminded me of Taiga. I still vividly remember being above the sea of clouds beneath. On the way, we met different ethnic
groups of dolkha district. Reaching kuri village at late evening being wet with rain water on chilling weather was greatest refuge. The dinner with team was among the best food I ever had. Also, it was the highest altitude I spent my night which made me feel proud. The chyang at kuri was amazing. At end I would say, my respect for Nepal has increased many folds and I feel proud of being Nepalese and Deerwalkian.

What I liked the most about this hiking trip was the rainforest like trail from Khari Dhunga to Kuri and opportunity to meet with my old colleagues from D2 during the trek. I enjoyed sharing few smiles with them. I was very pleased to see the tradition I once started to be alive and kicking. I started corporate hiking in Nepal in 2005 and since then it has been going well in D2 and now Deerwalk has joined the tradition. Who knows how many others could join in the future. Nepal offers one thing in the world that no other country does. That is natural hiking trail where people can see and learn a lot about the mother nature and the diverse Nepali culture and can enjoy the services and smiles of innocent Nepali people.

I always dreamed of hiking to Kalinchowk peak (yes is it 3788m peak), finally did it and it was full of adventure like mild rain for almost all of our journey between Khari Dhunga to Kuri, trekking in the dark (of course with a flash light), crazy downhill on the next day and breathtaking view from the peak. Like every other hiking, I had an opportunity to think loud and share my ideas with my friends. Manoj Shahi and I exchanged thought on how we could possibly make Deerwalk Institute of Technology (DWIT) the number #1 in Nepal and one of the premier institutes of the world. We uncovered a lot of challenges that we might face. One of them would be not enough supply of PhDs in Nepal. I, therefore, encourage Nepalese PhDs to contact either Manoj or me if they want to be part of sth BIG and want to be be rich while doing sth they like.

This was my first high altitude hike and was pretty excited about it. The terrain from Kharidhunga to Kuri was tough and exciting. The steep hills, cold weather, rain and darkness during end of ascent was best part of the hike. I could feel straps of my backpack. The dry fruits, glucose and snickers were enough supplements for me to get to the top. “Ye dai/didi Kuri pugna kati time lagcha aba” is the line that I recall most. I noticed the diversity in culture, religion and rituals of the locals and devotees returning from Kalinchowk on our way to Kuri. The jhwai kattey (local liquor made by heating alcohol, ghee and some stuff that I don’t know what they were) was smooth and amazing, and I will remain a fan for long. Next day I was thrilled to see the clouds beneath me. It looked as if it is whole bunch of floating cotton where I can dive into. One unique and interesting thing about this hike was the number of TRIDENTS (Trishul) that was there in the temple. Never in my life had I seen so many tridents with varying textures and shapes. The downhill from Kuri to Charikot was equally challenging because we were following electricity poles as a shortcut way. The downhill looked like as if it was never ending walk to Charikot and “Ye dai/didi Charikot pugna kati time lagcha aba” was the most used line on our way down. Finally reaching to Charikot, having a nice meal and visit to Dolakha Bhimsen temple completed my best hike ever.

9 thoughts on “Hiking from Kharidhunga to Kalinchowk”