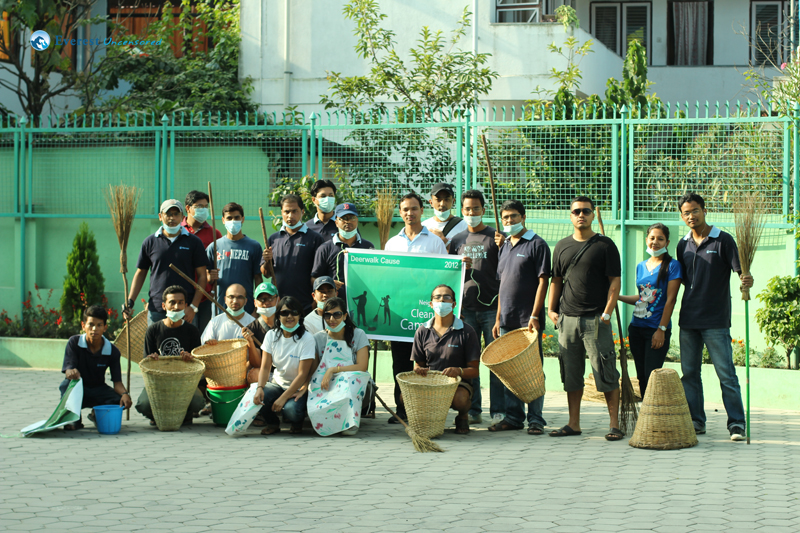 With overwhelming response from the neighborhood and all around after our Neighborhood Cleanliness Campaign in 2012 Q2, we were encouraged to dedicate one more quarter for our society. With this notion, we, the Deerwalkers, proudly and voluntarily assembled on Saturday, September 29, 2012, for a program that included the following activities:
– Cleaning at and around Tamreshwore Mahadevsthan temple
– Cleaning at and around Jaya Bageshwori temple
– Cleaning the area from entrance of Deerwalk to Tamreshwore Mahadevsthan temple

(In addition to the cleaning, a railing was installed around the Tamreshwore Mahadevsthan temple with the budget for the cause.)

A total of 27 volunteers from Deerwalk Services and Deerwalk Institute of Technology participated in the cleaning event:

Neelam Shrestha
In the morning of 29th September 2012, I woke up with excitement and I hurried to reach Deerwalk because I was participating in a “Neighborhood Cleanliness campaign” organized by Deerwalk Inc. as a part of Deerwalk Cause.

Being a new member to this esteemed institution, as well as participating in such a program organized by Deerwalk for the very first time, I was very excited. There were all together 27 participants in this program. Many of us were on Deerwalk premises by 7:30 am while others were on their way. By 8 am all of us were present. We had a quick breakfast before we began our campaign. Our campaign coordinator, Bhoj Raj Ghimire, instructed us to get divided into groups for more effective performance. This time we were going to clean Deerwalk surrounding, Tameshwor Mahadev temple and Jayabhagashwori temple.

We got divided into three groups and were ready to accomplish this campaign with enthusiasm and excitement while wearing mask and apron.

We got divided into three groups and were ready to accomplish this campaign with enthusiasm and excitement while wearing mask and apron. First we began with Tameshwor Mahadev temple and its surrounding, then we moved on to Jayabhagashwori temple . There we found a volunteer who joined in advising us for cleaning different areas around temple. We were all participating and doing our best to complete the campaign successfully. Some of the participants were capturing pictures, while others were busy sweeping, collecting dust and scattering water. At that time, the view made me realize how much better and effective it was to show something through actions rather than just talking about it. I feel that this campaign organized by Deerwalk has become an inspiration for people, and made them realize that they should be responsible in making their neighborhood clean and fresh.

I was feeling happy and good inside because I have always enjoyed being a part of such group activities. I would like to thank Deerwalk for organizing such campaigns and giving me an opportunity to participate, while looking forward for more such chances.

Narayan Sundar Sonepa
Deerwalk is a socially responsible organization. It has been popular among the youths of Nepal due to its social causes and initiatives. Under Deerwalk Cause 2012,Q3, a cleaning campaign to clean Jaya Bagyaswori temple was held on September 29, 2102. A group of enthusiastic and energetic employees and good citizen of Nepal gathered in Deerwalk premises at 7:30am.

At 8am Bhoj Raj Ghimire dai, gave a brief description about the program and the plan. We started cleaning making three different groups. Broom, dustbin, doka, etc were available as cleaning tools. We properly disposed the collected waste.

After completing the program, all the volunteers gathered in Deerwalk premises and concluded the program by enjoying refreshments.

Such cleaning program is itself a noble cause. In my opinion, in addition to cleaning, we should aware the local people to keep public places and their locality clean. For me, physically I was cleaning the temple and the locality but mentally and spiritually I was cleaning myself. I believe that getting involved in such programs provides us opportunity to contribute to the society we live in and we belong to.

Rajiv Manandhar
Early in the Saturday morning of “Indra Jatra”, we assembled at Deerwalk complex with the mission to clean up Tamreshwore Mahadevsthan and Jayabageshowri temple vicinity. This was the first time I had participated an event organized by the Deerwalk and I was quite excited to participate in it because I always believed in helping the community for the benefit of everyone. After a quick breakfast, we hurdled up for a short meeting. We divided the team into two groups and after gearing up with brooms, masks, aprons and doko’s, we started our cleaning campaign. One group started by cleaning Tamreshowre Mahadevsthan vicinity and the other started by cleaning up from the main gate of Deerwalk. I was in the second group which started from the main gate of Deerwalk. With good team coordination from Abanish dai, Pramod dai and Sushant dai, we cleaned up the Deerwalk vicinity quickly and then joined the other group. There were a few devotees coming to pray in the temple and a few pedestrians who seemed quite happy to see us cleaning up the neighborhood. After dumping the rubbish to the parking lot of Deerwalk for its proper disposal, we headed out to the Jayabageshowri temple.

Having reached the temple, started cleaning up the surroundings of the temple. We worked in 3 groups for cleaning up the front, back and surrounding portions of the temple. It got quite dusty in the beginning, but after we were done, we were quite happy with the results. It was a very nice experience to help the community. As we team up and grow larger, it only takes a small effort to make a difference. As we had a hard working team of 30 individuals, the cleaning up took just a few minutes more than an hour and we were all happy with what we had achieved from the campaign. With a smile in my face, I headed back home and prepared myself for the exciting festival of “Indra Jatra”.