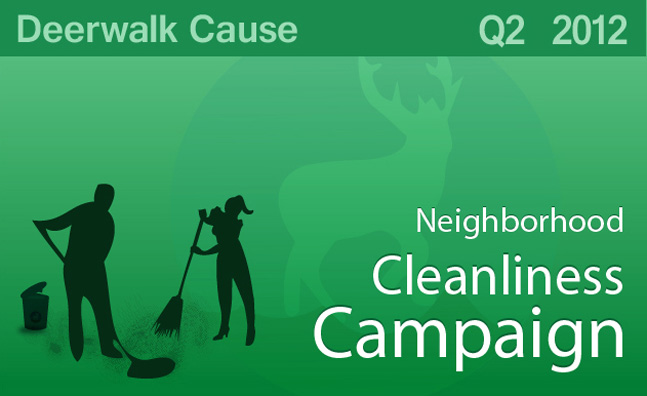 .
Deerwalk Cause 2012 Q2 was dedicated to Neighborhood Cleanliness Campaign in the vicinity of Deerwalk complex at Sifal, Kathmandu.  Some of the activities accomplished during the campaign were:
The campaign culminated in a voluntary cleaning/painting event on Saturday, June 16, 2012. A total of 34 volunteers from Deerwalk Services and Deerwalk Institute of Technology participated in the event:
.

Some neighbors also enthusiastically joined us that day and encouraged us.  Later, finishing touches to our work were given by hired professionals. We hope this campaign has, and will, benefit our neighbors, visitors, and ourselves, and also raise awareness for a cleaner and healthier world.

Bhoj Raj Ghimire: On Saturday morning, after late-night Euro 2012 matches, Deerwalkers assembled at Deerwalk complex in Sifal for some fun with brooms and brushes. No one was compelled and all were volunteering.  After a quick breakfast, the team was divided into three groups: sweeping, disposing, and painting. I chose painting. With masks and gloves on (aprons fell short of the participants), we started the mission. Hands, generally busy with keyboards, were now efficiently playing with paintbrushes and brooms. We  were snatching brushes from each other so that one could work more than the others. When two hours of hard work was over, some were still working; not ready even to join for snacks. I realized that I did quite lot of painting only when I woke up on Sunday morning and found that my hands were aching.  It was a very good experience working in public for the public. Unfortunately, my lovely corporate T-shirt is now no more usable; it has blots of paint all over. But, I am very much satisfied with what we achieved during the program.

Sulekha Bhandari: I feel the objective of ‘Neighborhood Cleanliness Campaign’ was to reiterate the fact that actions speak louder than words, and what better way to do that than to get one’s own hands dirty! As ‘a journey of a million miles starts with a single step’, we started the cleanliness program from our own neighborhood. We grouped ourselves into teams and successfully executed the cleanliness program with the co-operation and support of neighbors. We put our full effort in cleaning, sweeping, scrubbing, and painting the locality. This was the first attempt of its kind by Deerwalk, and I think it was very successful. Participating in the program was real fun, and I would love to get involved in similar activities in the future.

Jeevan Timilsina: Each of us is confronted with a choice: a choice that will impact not only our future but the future of our children and grandchildren. We want to ensure our children’s future on this planet is in one that is clean and healthy. However, many of us also think that the sacrifices might be too great. Good news: it’s not as difficult as you think it is! The choice is clear. It is time to stop talking and to begin acting. That’s what we did this Saturday.  Early morning, Deerwalkers volunteered in cleaning the Tamreshwore Mahadevsthan temple vicinity. We swept the way to our office, cleaned the temple, and painted the walls. It was a small gesture from us but the change in the neighborhood after the campaign made us smile. We had lots of fun while working and ended the campaign with happy proud faces.