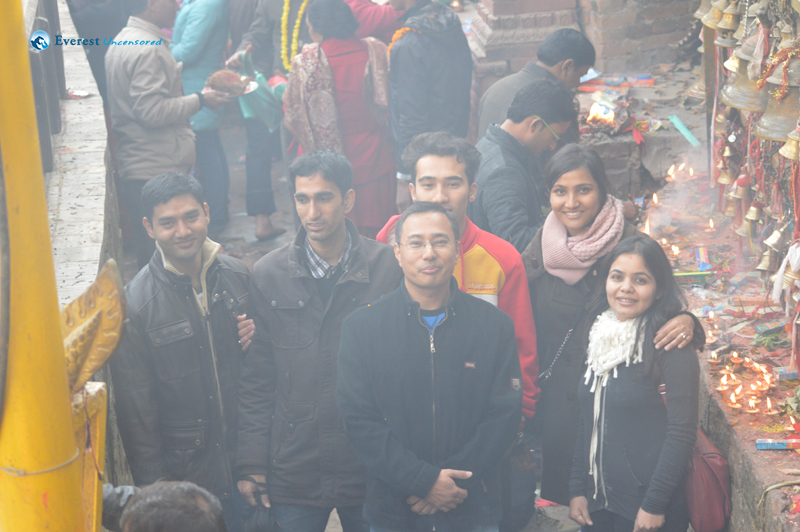 I had heard about the outings at Deerwalk before, and had expectations of some sorts but had no idea how this one was going to be. The day began with a combination of chilled weather and excitement as it was finally the day for the first outing for many of us.

We were asked to be present at the office premises but instead Sweta and I decided to wait for the bus at Kirtipur. Not very familiar with the place we got lost for a while. My adventure seemed to have started even before getting to the picnic spot. Finally, somehow we managed to get on the Deerwalk bus and continued on our journey to the destination that was Dakshinkali.

Once in the bus I could hear everyone talking and cracking jokes. Everyone in the bus was full of energy and singing aloud. After about 30 minutes of drive, we reached our destination.

We had our breakfast at around 10:00 am. Everybody was starving. The new comers maybe got too excited and forgot to eat before leaving their home for picnic, whereas the older ones most probably exhausted themselves out after so much singing in the bus.

After the breakfast everyone regained their lost vigor. Everyone got involved in one activity or the other. Some played badminton, some played volleyball, and some decided to try their luck at the game of cards while some started remembering their roots by climbing the trees. A few decided to take a little stroll around the area instead.

Around 12 noon we were called for lunch. Thereafter, I played cards for a while. Lady luck was on my side but was not in the mood to rid everyone of their money. And as the music started playing I could see delight and joy in everyone’s face. I was kind of surprised to see everybody cheered up. This side of theirs was totally different from the usual calm and focused image they projected at the office. Ranjan and Bikram started their unstoppable dance marathon which lasted till the end of the picnic. Then later on, everybody joined in.

In the evening, some of us headed for a walk led by Kishor. His instincts for directions were amazing and he also managed to share some jokes. After returning from the short walk, we had our dinner and headed back home.

Though we were at the end of the picnic, the energy levels didn’t seem to go down. The bus ride back was even better. The “antakshari” in the bus were taken to new heights when people began to sing jingles from the advertisements like ‘R A R A… RARA mitho bhanchan sara’ and childhood rhymes like ‘Intu Bintu London Ma’. People ran out of songs but didn’t run out of energy.

Finally it was time to leave and head back home. The early morning rushes and battle with the chill was totally worth the day. The day was fun and memorable and obviously lived up to my expectations. Experiencing the great Deerwalk outing for the first time was outstanding. Soooo, when is the next one?

It was the first official picnic for me and I felt very good to have been a part of it. It had been quite a while since I last visited some holy places, then there I got a chance to visit Dakshinkali Temple. I along with some of my friends had a good time being up there, taking snaps of each other on the way.

As we had got to the picnic spot, we spent a lot of time playing badminton and cards. As others were busy in their drinks, I was rocking on the dance floor with my hands full of wine. It sounds weird, but I was dancing all day. Well, some of my friends ask, whether it was the energy, I got from the wine then I replied,”I love dancing and I can’t stop it unless the music stops”. I had an awesome day.