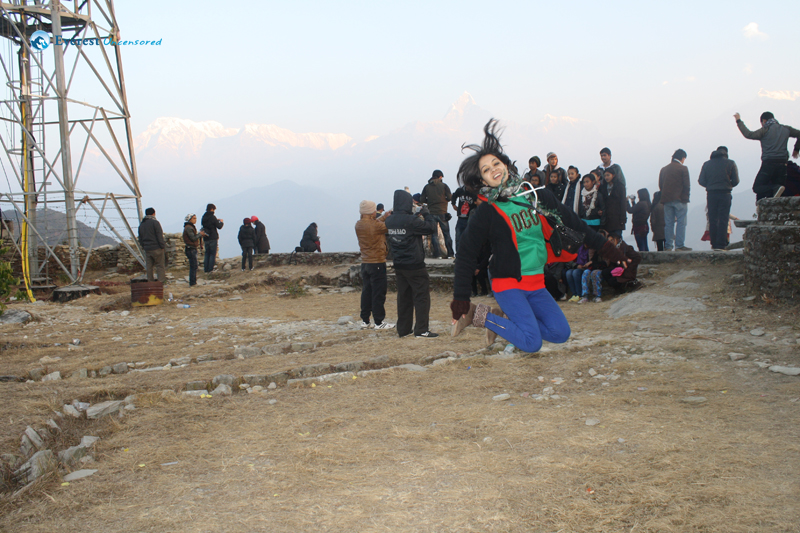 “The way a team plays as a whole determines its success. You may have the greatest bunch of individual stars in the world, but if they don’t play together, the club won’t be worth a dime.”
– Babe Ruth

Each individual works towards a common goal, and that is what makes the teams work. Here at Deerwalk, we value teamwork above all else; and the time for unwinding and getting to know your teammates beyond what they can do on a computer is amongst our greatest traits. For Q4 BA team building, we had settled on travelling to Pokhara. It is a miniature countryside surrounded by the mountains and one of the most popular tourist destinations in the country. Pokhara got everyone super excited, no one complained to leave in the cold January morning. Ashay sat down with Bhoj discussing some last minute changes for a project as we prepared to leave. So on January 12, 2013, we set out from one valley to another; from home to paradise.

Here at Deerwalk, we value teamwork above all else; and the time for unwinding and getting to know your teammates beyond what they can do on a computer is amongst our greatest traits.

Just as we were leaving Kathmandu, we met the Data team as they were drinking tea. We stopped for breakfast at Naubise where we had tasty meat and beaten rice; and coincidentally the data team followed us to the same restaurant!
We had finished off all the food by the time they showed up. We continued playing ‘Antakshari’ after breakfast. Sangita and Anita were good and their ‘historical database’ of songs was fantastic. Bikram commented how it was like Hadoop, and it worked on a distributed system. I was not the only one who did not get it :). Every one wondered how Ashay could sing those songs we have never heard of; we suspect foul play. The ‘Antasksari’ program lasted till Mugling, and then we all enjoyed Sangita’s playlist.

The next milestone for us was ‘Vyas’ cave. Apparently, this was where our great epic, the Mahabharat, was scripted. I had chance to observe the sculptures of various ‘Rishis and ‘Munis’, and that was amazing. Neeraj and Bikram crawled through the tiny opening of the cave and came out a crevice on the other side, as Ashay swore he would not even fit. We agreed :). We played around for a little while on the river bed before rushing back to our van en route to Pokhara.

Once at Pokhara, the first order of business was to get food, and after a healthy lunch, we headed to the hotel we had booked earlier. Then commenced the third team building activity of the trip, as we got on a platform boat and had teams of two paddle the boat and traverse the Fewa lake. The sunset we observed from the lake will remain with me. It was the sun at its most beautiful as I had ever seen, until the next morning that is :). When we came back to our hotels, Ashish brought out his specially crafted Poker chips and had us play for a couple of hours. Everybody had a blast, but I never won. I suspect Ashish rigged the rules. I am reading up on Poker before the next trip. That night, we went to Busy Bee where an awesome band sang songs of Metallica, and a few Nepali songs as per our request. It was great, and everyone danced until their feet were sore.

But right at that moment, the beauty the golden tip of Annapurna radiated surpassed everything I knew.

The next morning dawned foretelling a busy day. We were going to hike to Sarangkot and Ashay was running around shouting and disturbing our sleep. Neeraj and Ashish would not wake up at all. All said, we left station by 5 am and we got to the view point at 6:40 am. The next ten minutes were pure anguish, as none of us could see the sun. All that walking in the morning, getting up before dawn, was going to be for nothing. And then just like that, the tip of Annapurna started turning golden. The sun was coming up, and the mountains were basking in its golden glow. I have seen much beauty in my life, for I live in possibly the most beautiful country in the world; but right at that moment, the golden tip of Annapurna surpassed everything I knew. It was amazing to be there with a team I love being a part of. A surreal wakeup call it was; then we started descending downhill.

Once back at the hotel, it was time for our team building games to continue. This time, we were playing truth and lie. Each team member would write one truth and one lie about himself, and we would guess who wrote it, and what was true. My team won, and won big. All those chocolates… :).

There we were, already home without anyone noticing.

The next game was when we were having fun playing musical pillow. When the pillow ended up in your hands, you would be subjected to Sangita and Sulekha’s whims of punishment. Neeraj, for my money, had the worst first date :D. Ashish won that round for successfully lying to his wife about coming home a couple days late. I was so truthful; I never won anything in that round :). They made me dance, though.

It was midday by then, and we had to start packing. As we made our way back, we played Dumb Charades. Everyone was surprisingly good at acting and guessing. No one missed a single round and it was in that mood that Kathmandu took us by surprise. There we were, already home without anyone noticing. I have been to several trips but I will always remember this one for all the beauty I witnessed and the fun I had with the team. Teams are built not just in rooms, but out there in the open. It was a great experience.

Amrit Bhujel
It was 7:00 am when I met the Deerwalk BA team in the vehicle.

We reached Pokhara in the afternoon and ate our lunch at ‘Maili Bhancha Ghar’. We saw the famous singer Ram Krishna Dhakal in flesh at our hotel.After lunch we went boating in Fewa Lake which was very exciting.

The next day we woke up early at 4:30 am and went for sightseeing in Sarangkot. The view from Sarangkot was mesmerizing. After a long wait we saw the sunrise at 6:30 am. It was beautiful!! I saw the full range of Annapurna Himal, with the beautiful city of Pokhara and the Fewa Lake in its foothill. I had never seen such beauty before. I heartily thank the Deerwalk BA team for giving me the opportunity to be a part of their team building outing.