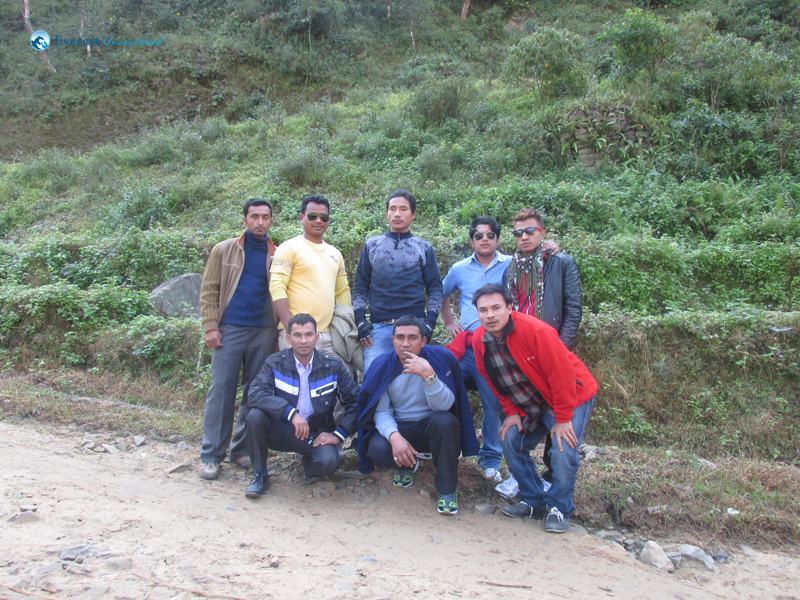 The feeling of going outing with the team with whom you just love working is something surreal. We were out from the office premises at 4:30 AM, and we were nine of us in total.

At around 11:00 AM, we reached Tatopani, a religious place situated at Sindhupalchowk district. As soon we got there, team members were very much in hurry to have hot shower since the weather was quite chilly. Without wasting a minute, we rushed Khasa Bazar. The security there was quite rigid. A Nepali citizenship card is compulsory to cross the China border. Most importantly the communication in the border line can be done efficiently through hand signals.

The crowd on the other side was alarming. The traders were in heavy rush. The place was full of labors and sacked commodities. A number of Chinese cabs were in alert to make some money. We took two cabs and visited the Chinese street. While our team members were shopping, I got a feeling that the retailers were a bit short tempered. Our happy team members were in a dilemma for they had to pay high costume charge while returning back to the motherland. Our members spent the whole day shopping and it was already around 05:00 PM when we were done. In search of food and shelter, we drove to Barahbise and spent the night at Chandeshwori Guest House. I say the night was a real team building one.

Early next morning, December 01, 2013 we drove back to Sukute , and had a family lunch at one of our team member, Binod Baruwal’s home. After the heavy lunch we did a short hike and had some photo session near Sunkoshi river bank. At around 12:30 PM we marched back from the outing. On the way back, we encountered several police check post assuring the valid costume charge paid receipt since our members did a lot of shopping.

As a line of conclusion, I say the overnight outing was so much exciting and truly a team bulinding session.
I would like to thank all my members for a great time.

This was my second outing from Deerwalk family. This outing with my own working team was just terrific. The travelling environment was good enough. Travelling after a long time truly nourished my mind. Visiting Khasa Bazar was an amazing feeling to me and I did great shopping in the border line. The frustrating thing for me was to pay the costume charge bought for personal use. I am thankful to my team members for the time spent at Sukute, the moments at Sunkoshi river bank.

As a line of conclusion I would like to say that the outing was amazing and a fruitful one.