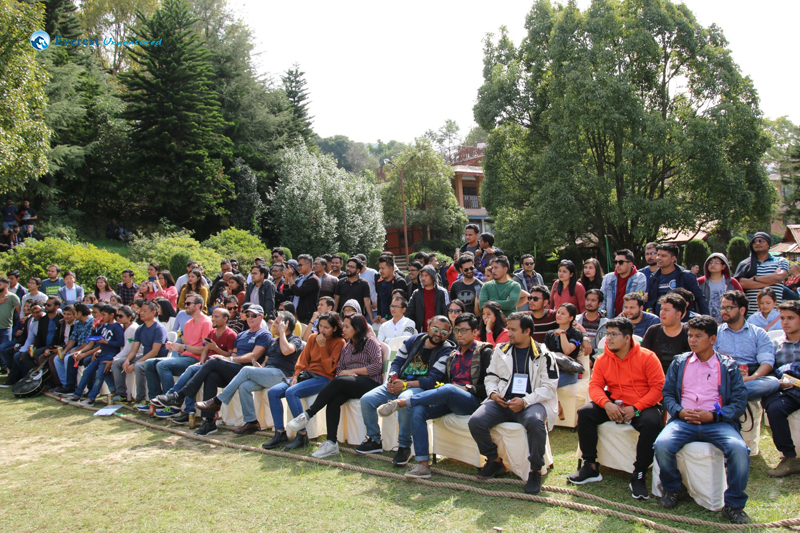 On Saturday, November 9, 2019, Deerwalk Services Pvt. Ltd. organized its annual picnic at Godavari Village Resort. It was a misty Saturday morning at the height of autumn, and as the Deerwalk shuttles lumbered up a worn-out Godavari street, all of us were already giddy with the prospect of the upcoming excitement. When we reached the venue, a mild sun had risen, and the mist was already fading away. A bunch of outdoor patio umbrellas with tables and chairs spread along with the lawn. A buffet table was also laid out in one corner. We kicked off the most-awaited moment with a small but mouthwatering breakfast of tea/coffee, cookies, and sandwiches—ambrosia for our hungry bodies.

We flocked around the lawn, casually strolling, forgetting the monotony of everyday lives, and losing ourselves in the picturesque beauty of the place. Some of us started playing frisbee, while others were busy chit-chatting over tea and coffee. As the clock struck 10:15, Jeff Gasser, the CEO of Deerwalk, gave a short inaugural speech. Then, the emcees, Preksha Shukla and Shyaby Thakuri, started the inter-squad games with overwhelming enthusiasm. Tic-Tac-Toe—Dash, a board game of 3×3 grid, put the squads right into their competitive spirits. Each of the teams tried their best to win, or say not to let the opponents win. At the end of that fun game, Tug of War—the major picnic ritual—got kicked off. There was an apparent excitement in the air, and we cheered for our teams.

At the end of these two team-building games, we were finally allowed to drink: beer or juice, the choice was open. Over scrumptious snacks of grilled chicken, fish cutlets, and vegetable tempura, we swigged the ice-cold, frothy, golden and red liquid—the nectar, the true drinks of Gods. We became Silenus and Dionysus, the legendary drinking buddies. The Nepali writer Pranaya SJB Rana once wrote, “If there be any drink of the Gods, any ambrosia, amrit or nectar, may it be the amber magic potion that is beer and may it be Belgian.” We quaffed and gulped that “amber magic potion” in the same spirit, albeit it was not Belgian but Himalayan, the hops of which were from the foothills of the mountains and the water from their rushing streams.

We cheered and applauded the various squad-wise performances: the dances, the skits, and the songs. Dazed and mesmerized as we were, with our beer-filled and caffeine-charged minds, we nevertheless enjoyed the present time—our attitude toward life was carpe diem. As the performances ended, we took a casual stroll along the lawn, drinking as much as our bellies would muster—be it juice or beer or even water. Conversations flowed like draught ale. Music blared out of the loudspeakers—an upbeat Bollywood song, devoid of any meaning. Amidst the thrumming of legs and the swaying of arms, what more could one expect but to forget everything about humdrum life and its miseries, and lose oneself along with the beat?

And then—bingo! We had yet another ritualistic game. As the numbers came tumbling out of the bingo cage, the excitement escalated. We jumped and cheered. Someone won the four corners and clenched the prize, but only after dancing for two minutes—a crazy rule which kept many of us from winning … well, not literally! As the game ended, so did the drinks. And we all danced to many upbeat songs till it was time to go home—or office!

All in all, everyone was extremely happy at the end of the day. After all, nothing is better than a picnic eaten in comfort (or excitement) and grooving on the dance floor (or the green lawn) to your favorite tunes. DeerPicnic thus turned out to be an impressive event—the kind that should be conducted every year. Without a doubt!