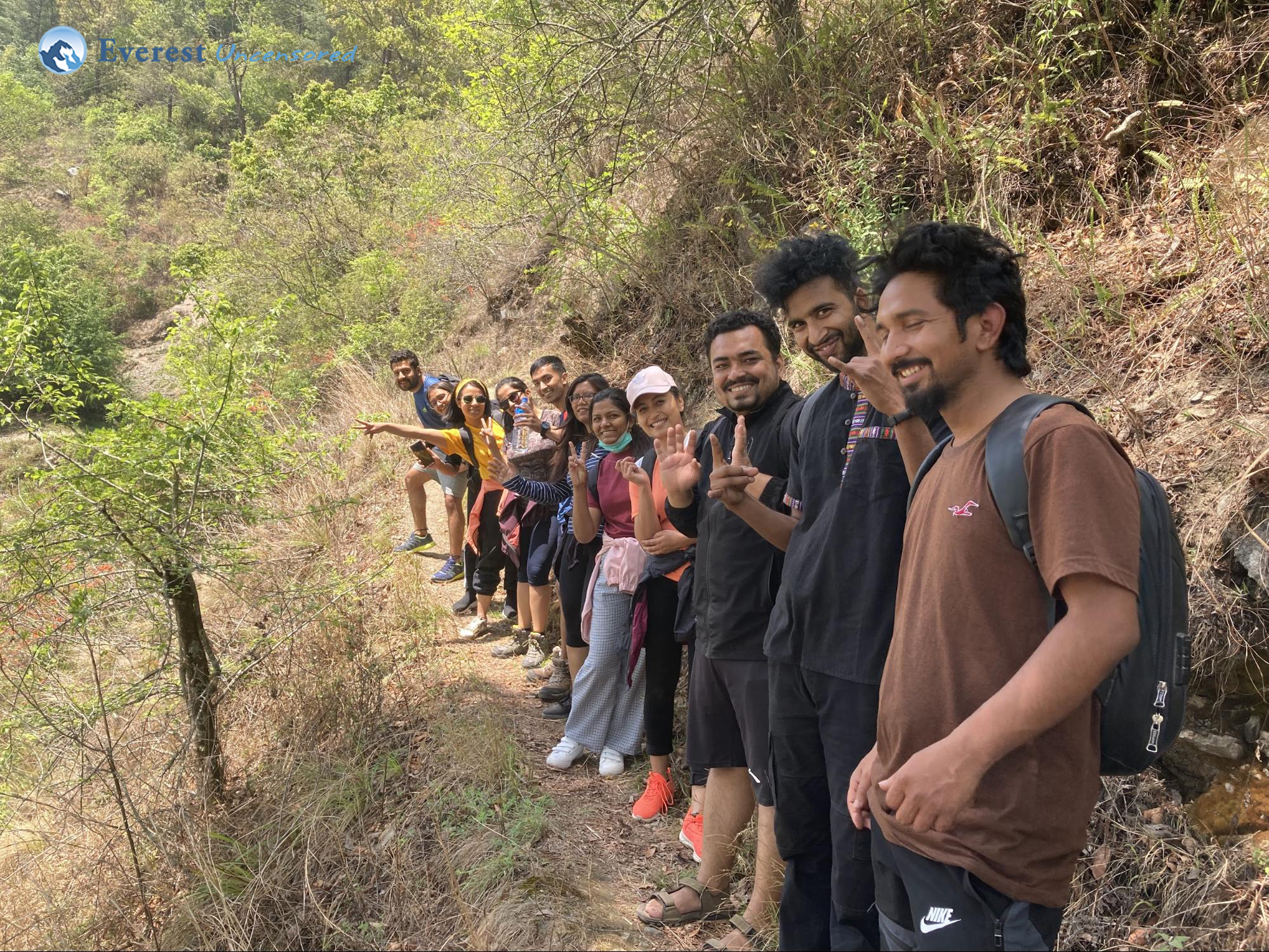 During a nice and sunny morning of 23rd April 2022, our company’s employees ventured to Mohini Jharana. By 6:30 AM, we were to gather in front of the Deerwalk Complex gate. By 7:00 AM, we left for our hiking destination. We reached Daskshinkali at 9:00 AM and had breakfast (Aalu chana, boiled egg, and black tea). Thereafter we continued our journey. It was a bad road with many potholes, but the view was amazing. Rhododendrons covered the hills, making it seem like a red blanket had been thrown over the green hills. The weather was bright and sunny. Through Balkhu, Kirtipur, and Dakshinkali, we made our way to Kulekhani, the ingress to Mohini Jharana. We started the hike around half-past ten.

The total hike distance from Kulekhani to the destination was about 16 kilometers, including a steep climb. The shadow of the trees from the thick jungle sheltered us from the scorching heat. Following a 20-minute walk through the plains, we reached a point from where we started climbing uphill for 30 minutes until the extreme route began. We were walking up a steep hill with a narrow path, which made the trail harder. It was clear that the trail hadn’t been used in a while. We helped each other climb uphill at times. To give you an idea of how steep the trail was, there is a saying in English that is often used, “one miss, game over”, one misstep and you would have probably fallen twenty feet below in the mighty Indra Sarovar reservoir. Water from Indra Sarovar reservoir is used to generate electricity at Kulekhani I and II. That is where we get the majority of electricity for everyone in the country. However, the extreme trail made the hike more fun and a moment to cherish. And the cool breeze from Indrasarovar lake made us more energetic.  If you’re a person who loves green hills and views of natural springs then this hike should be on your list. After climbing a steep hill for about 2 hours, we finally reached Mohini waterfall.  There you need to pay an entrance fee to get an entry to the natural pool and the mighty roaring waterfall.

The Mohini waterfall was Mediterranean-blue and magical. It was swishing over the rocks joyfully. It was thundering down into the pool like a gigantic water spout. The waterfall looked like a sheet of blue velour as it swished down. We stood under the waterfall to cool down, but it was catacomb cold. It gave us goosebumps immediately. We ended up quivering and shivering on the bank. The nectar sweet smell of spring flowers perked up our spirits. Sandeep dai separately stood under the waterfall and practiced meditation for some moment. It looked very tempting and peaceful to watch the magical moment. Then we sat down to enjoy the moment and had some chocolates and apples. The nature and beauty of the waterfall have pulled up our spirits and we all wished for the time to stop. As a whole, we left our hearts at the Mohini fall and it was time to say goodbye to the beautiful Mohini Fall and descend. Whilst descending some of us decided to choose a different route, while some of the hikers came down the same route they went up. We chose to follow the path of water in the river. We were jumping from one rock to the other to cross the river and find our way back safely. We made it a bit late but we did have our little adventure.

We got back where we left our office van. Although the hike was tough we were not exhausted. We still had a little room for chit – chats. By 5:00 PM, we reached Kulekhani, had our Lunch, reached the premises of Deerwalk Complex at around 7:30 PM, and dropped off some of our friends along the way. The hike’s experience was overall outstanding. Not only did we enjoy nature, but we also gathered a lot of experiences and memories with our leaders and friends. The trail allowed us to understand and bond well with each other.