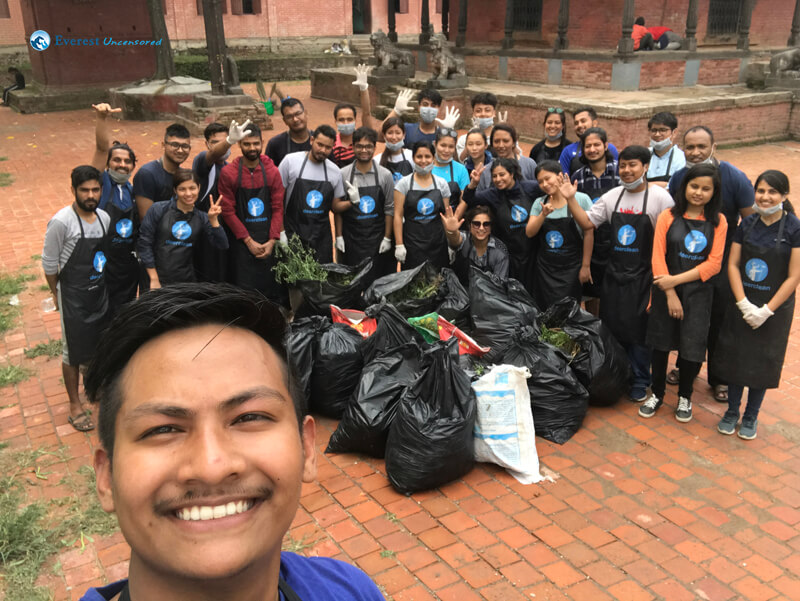 Deerwalk Services was never only just about solving Big Data problems. It has been continuously conducting many programs that gives back to the community and one such is DeerClean. About a week before, the formal process for the Deerclean of Squad D began. All employees got invitations and to put their names on the list. 29 people had their name finalised with Gaurab Manandhar as the coordinator. We all were determined to make it successful but yet wondering what and how that Saturday would unfold.
As Saturday came, most of the participants gathered together at 7:30 to start the day. Rest of them had decided to go to the venue by themselves. Soon enough, people started gathering and planning their chores and newcomers were getting to know each other. At around 8, we were ready to go.
Gaurab Manandhar, our coordinator, was dashing everywhere, collecting the items in the checklist. We helped him get our tools for the day’s operations. We all carried some. A few minutes later, we hit the road. After moments of chitchat about how we would clean, how the children would feel the next day seeing their changed school and how we could make this successful as a team, we finally arrived at our destination, Naxal.

Nandi Ratri School waited for us. We greeted the school with our hungry stomachs and enthusiastic insights about how to clean the school as fast as we could. Photo shoots began almost immediately after unloading our equipments. There were poses of Harry Potter with the broom, as a Knight with the broom and so on. Meanwhile, some were busy providing the notebooks and pens our team had brought to the school representative. Most of us began taking a walk around to see just how much work we would have to give in that day. The insides of classrooms expected a lot from us. Before this building and another one around the back, there was a sacred splendid temple. Some of the things to be cleaned off there was dusty classrooms which had junks of wastes, school’s ground, the grasses growing off on the ground, off the walls around the temples and on the track connected to the school building by the side of the road. We all began discussing how we would go cleaning all of these. But before all that, we were all hungry.
The food was brought inside the compound from a local shop nearby. The spicy chana and the sweet looking sel roti looked mouth watering and the next moment, we were on a queue to get our food. It was fun having breakfast with these many people, talking about different things. The hot chana brought out the vigour in our body and the sweetness in sel roti, dipped in warm tea seemed to calm down the rush of things. A few minutes in, and we had our boosts. At about 9:15AM, we set off on the mission.

It felt as if the weather that day favored our noble cause. The sun hid amongst the clouds to provide us a shield to bolster our work. We got divided into 3 teams. One of it cleaned the immediate ground near the gate and the classrooms in the front building. Other team cleaned the sacred temple area that was between the two parts of the school. And the remaining one cleaned the second building at backside. With the cloudy and cool weather at our side, we picked up our tools and started. Some picked brooms, some had mops, some were handpicking the bigger wastes like plastic bottles and wrappers, and just like that we went on. After some time of hard work, changes started to appear which motivated us even more. The funny part is, we had planned to clean classrooms with brooms and wipe only the desks, benches, reachable ceilings and windows but as we got into the job, we had to make it perfect. So, we ended up wiping all the classroom floors. After all, the happy faces of children were dancing around our mind the whole time. When all was set and done, after some hours of work, we all sat there and watched the drastic change our team had brought on and felt glad about it. And of course, we still could pull off some energy for group photos. After being thanked by school representatives, cleaning the tools and loading them to our bus, we headed to have lunch. There was Bajeko Sekuwa’s outlet nearby where we had our delicious thakali lunch and relieved our stomach. By then it was time to say goodbye. Some of us directly headed home from there while some of us got on the bus to the office and went home from there.
If all of this is to be concluded, we would never forget the inner satisfaction we got by participating in such a noble cause which helps underprivileged little children.