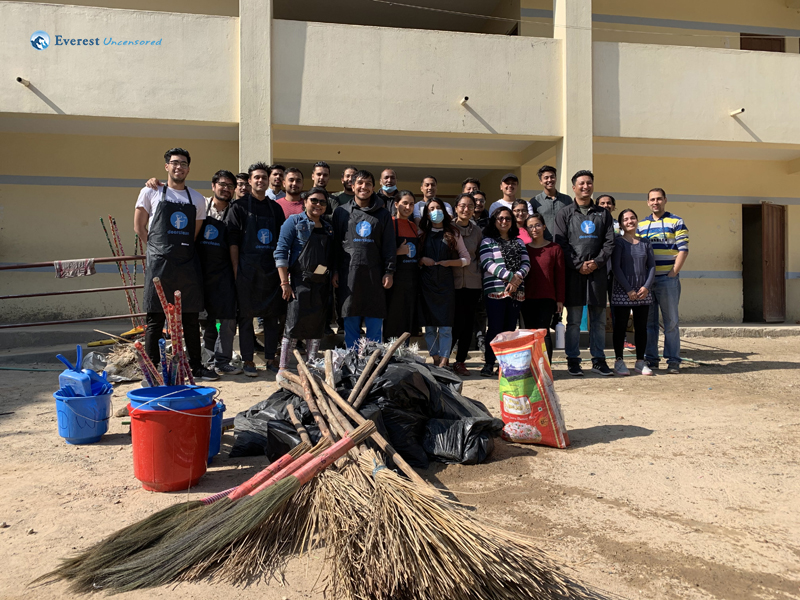 Takdir Bartaula
It was a cold Saturday morning on November 30, 2019—the day for the Squad D DeerClean II. However, it wasn’t cold enough for the volunteers of Squad D to put the effort into Corporate Social Responsibility initiative—started last year by Deerwalk wherein a group of Deerwalkers clean a government school with the goal of providing a neat and tidy environment for the students who are in dire need.

We had contacted Shree Jana Uddhar Madhyamik Bidhyalaya, Ramkot as our venue for the second episode of our DeerClean event, and our offer was duly accepted. There was a total of 27 numbers of participants. We loaded all the equipment and materials provided by DWS and headed for the destination at eight in the morning. Everybody was on time and excited about the event. After battling through the traffic jam and rough roads, we reached the venue in an hour. The school premises were large, which spread as two three-storied buildings and a couple of single-storied huts. We were surprised at seeing the number of rooms the school had, but our determination was strong and it grew even stronger seeing the condition of the classrooms.

We started the event with a light breakfast for the energy we needed to have for the rest of the 3 hours. After breakfast, everybody gathered in the courtyard. We then distributed all the required equipment that was necessary for cleaning. After having the proper equipment, teams were divided, and each team consisted of 3 to 4 members, and each team was assigned to different areas for cleaning. I was partnered with Pratik Maharjan, and we were cleaning the windows and water taps. The condition of the school was pathetic. Each classroom was full of specks of dust and dirt, which might have been due to the on-going road construction in that area. Each team member gave their best, and all the school premises including the classrooms, water taps, ground, gate, and nearby areas were cleaned. Each member took a picture of their respective areas before and after cleaning. After the competition of the cleaning campaign by midday, we collected each equipment, cleaned them, kept the stack count as it was before and load them onto the bus. Around 9 to 10 students from the school also helped us clean the surrounding. Sudip Khatiwada distributed the notebooks and pencils to every student, and we took a group picture with the Principal of that school.

By then, we all were hungry and exhausted after continuous 3 hours of cleaning. Then, we went to eat Thakali rice set at Namo Buddha Thakali at Swoyambhu. After getting some rest, we returned to the office. It was an amazing experience, and I am very happy to be part of the campaign.