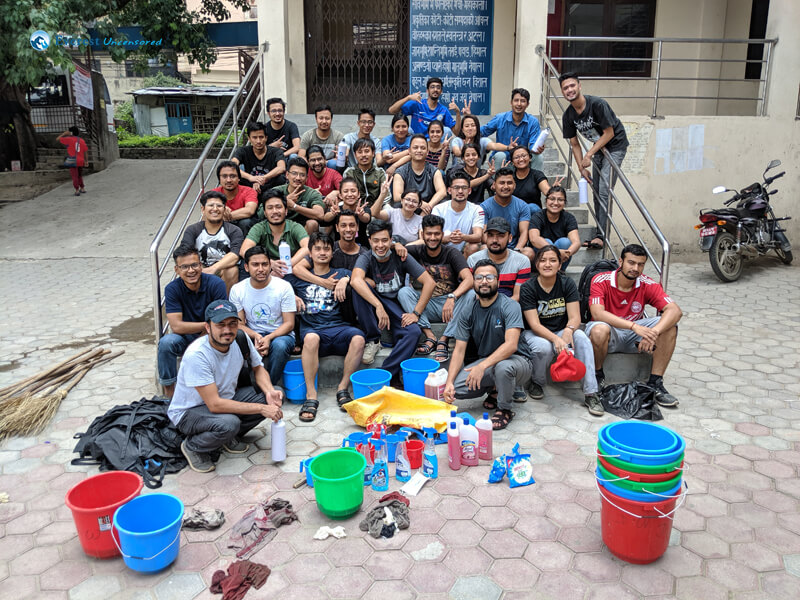 Rishav Jain
At 6:30 am sharp, my alarm went off and I was like – ‘ Why should I wake up so early, that too on a weekend to clean some school? ‘. Who knew later it would turn out to be such a heartwarming event.

Most of us had gathered in Deerwalk complex at around 7:30 am (some decided to reach the destination on their own). We collected all the necessary items required for the task and boarded the bus. Everyone seemed excited to go on a cleaning spree. We reached our destination ‘Dhumbrabaraha Madhyamik Vidyalaya’ at around 8:00 am. But before we began our godly tasks(Cleanliness is next to godliness – Gandhi said), all of us decided to have breakfast (pehle pet pooja phir kam dooja). We went to the nearby eating place( Chhapro Foodland) and had some bread, coffee, omelettes, pakodas and french fries. All of us seemed full. Biswas Dai then took the headcount and we all went back to the school premises.

All of us were already divided into groups the day before. There were 9 groups in total with 4 members in each group. Every group had a leader who was to guide their respective subordinates. We were standing in our groups and cracking jokes like “Which group would be the lucky one to clean the washrooms? “ while our leaders were collecting things required for the cleaning. We were handed over gloves, masks, aprons, brooms, mops, glass cleaners(Colin), buckets and garbage bags. Each group was assigned to different classrooms and finally, we began our cleaning journey. We made sure nothing was left untouched. We cleaned fans, desks, tables, chairs, swept the entire floor, removed spider webs, scrubbed windows and walls. In between those, we also managed to take a few photos. After the classes, we all came together to clean up the corridors and the playground. It was tough but everyone gave their best to make sure that everything looked neat and tidy. We all seemed professionals(“Give your best in everything you do”). After finishing up the cleaning, we cleansed ourselves up and then regrouped together to see off the giving ceremony.

Yashasvi Dai handed over the notebooks and stationery items to the school teacher. She received it with a huge smile. We then clicked gazillion group photos and bid goodbye to the school. After 3-4 hours of tremendous cleaning, we all deserved a great lunch, so we decided to stop over at ‘Lete Thakali Kitchen Dhumbarahi’ (well who doesn’t like Thakali). They served us great food. With our stomachs full, many of us left for homes on our own while few boarded the bus back to Deerwalk.

At last, I felt my sleep was broken for a really good cause. The sense of gratification you feel after doing something good for others is awesome. I would like to appreciate Prasiddha on behalf of everyone for handling the event so smoothly. I hope Deerwalk doesn’t break this trend and keep organising such great social events.

Aarya Kshetri
Truth be told, I had been somewhat dreading the idea of having to wake up early on a Saturday morning. But the opportunity of doing something good for the community was not to be missed and there was also a little curiosity in the back of my mind about how the experience of cleaning in a group might be, since this was also the first time I would be involved in such a thing. Perhaps I was also a bit apprehensive, since I am not much of a cleaner, my spring cleaning usually involves moving a bunch of things from one place to another, wiping the dust off and calling it a day. A simple premonition, but I knew there was going to be much, much more cleaning involved and I wondered if I could be able to do it. Despite this, I was ready for the challenge.

I wasn’t too worried about how to get to the location because Dhumbarahi Madhyamik Vidhyalaya is mere ten minutes’ walk from my house. As I reached there, the temple bells rang through my ears from the Dhumrabaraha Temple just in the vicinity of the school. There were also loud fits of laughter from the people who had come to do Yoga which was seemingly conducted every Saturday in the school grounds. Among these noises, I heard the voice of some members of Squad A call out to me. They were waiting for the rest of the group to arrive.

After everyone had arrived, we headed to a nearby restaurant to get our breakfast together that would give us the much required energy for what awaited us later. Then it was time to get all the supplies out. We were divided into teams of four members each so that the cleaning would be more organized. Each team was then given assortment of cleaning materials like brooms, aprons, masks and so on. This was easier said than done, since teams were yet to decide where they would be heading so it was difficult to know whether the supplies we got were the right ones. Nevertheless, we decided to handle classrooms first and teams were free to choose the classroom they had to clean on their own accord.

Things went pretty smooth after this. The classrooms that me and my team chose didn’t seem that dirty at first glance but we knew that the moment we would start with the cleaning, like some kind of alternate version of Murphy’s law, every sort of dust and dirt that could ever turn up, probably will. But were we intimidated? Not at all. In an unspoken agreement, half of us decided to start with sweeping the floor, while the half of us wiped the desks and benches until not a speck of dust remained and the desks and benches looked sparklingly clean. The whiteboard only looked “white” after it was cleaned thoroughly. Then it was time to clean the door and windows, and this sounds easier than it seems, because not even seconds later the water from the wipe had dried, the glasses would go back to looking like they had never been cleaned. This was annoying but we did our best to clean it to our full abilities. Much like video games, we ended up fulfilling our cleaning missions one by one and had gained a sense of satisfaction like how we would gain points.

Little did we know, the main boss had yet to arrive and this time it greeted us in the form of a few defunct classrooms that had enough dust to fill the Sahara desert and even dead birds! It was quite an overkill. But even though the dust never ended and it flew around the classroom like a desert tornado, we persevered against all perilous odds and managed to clean it up to the point that the classroom looked like it could be put into good use again. We took some photos here as if we were students ourselves, reliving those beautiful memories from our school days.

Next in our list was the courtyard. We realized that the space besides the main building had basically become some sort of dumping site for all kinds of dirt, but what truly broke my heart was all that plastic thrown carelessly around. Thinking about how it would soon pile up anyway even after we picked them all up made me a little sad but what we were doing was not about the durability of our own hard work, but rather about the example we were setting by making an effort to make our surroundings clean and hygienic which would hopefully inspire the teachers, students and even the temple goers who watched us from afar to do the same.

Four hours went by in a flash and with a deep feeling of appreciation and respect for the people with cleaning jobs who do it every day for us so that we can have a safe and hygienic environment because it’s a tough job and deserves nothing short of a salute, we got to cleaning ourselves free of all the dirt and grimes. After all that cleaning, we really deserved to treat ourselves to a delicious meal so went to a Thakali Restaurant located in Dhumbarahi. This meal tasted especially good after the whole morning spent working hard on cleaning.

Finally, it was time to leave. We felt the tiredness in our bones after sweating our brows cleaning throughout this particular Saturday morning but there was also lightness in our heart and bounce in our steps thinking about how what we had done was perhaps something very small in a grand scheme of things, but it was something we did with good intentions and still managed to have a bit of fun here and there. This was undoubtedly rewarding although challenging as well. These good intentions will not pave the road for dirt but for a clean school, home and surroundings and our effort will not go to waste but the dust and dirt sure will.