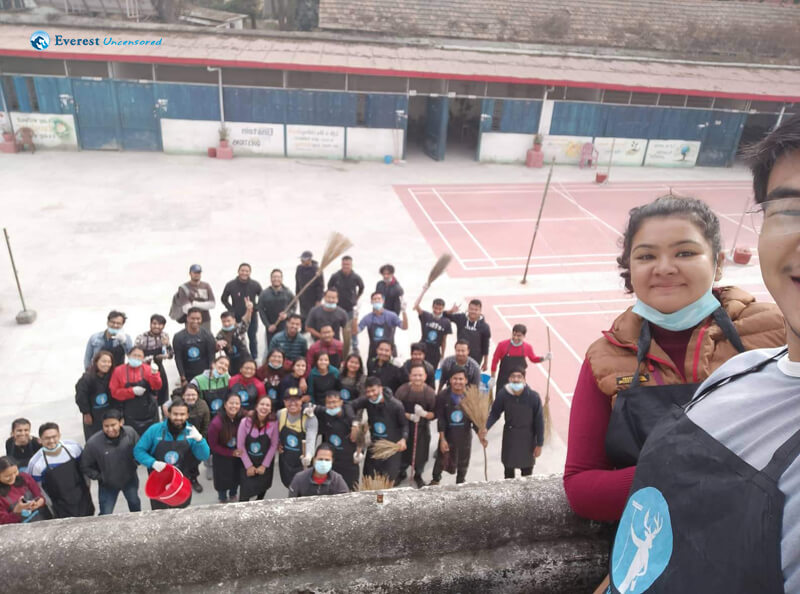 Anjila Neupane
For the Deerclean on November 16, our destination was Adarsha Kanya Niketan Higher Secondary School, located at Mangal Bazar, Patan, Lalitpur. This was my first experience participating as a volunteer for Deerclean. We reached Mangal Bazar at around seven in the morning. All the required equipment like aprons, buckets, mops, brushes, brooms, gloves, and masks were brought to the school.

As we had to complete the cleanliness campaign by eleven that is before the exam in school started, we didn’t even wait for breakfast. First, we took some pictures of the school. We got divided into six different teams, and each team got scattered to different parts. We started by cleaning the ground. We broomed the playground and then started cleaning the classroom. We mopped the whiteboard with a piece of cloth and cleaned the dust from the doors, windows, and the concrete flooring of the rooms. The windows had layers of dust piled over, so they required some extra effort.

We then stopped for breakfast as everyone was very hungry. We took a rest for a few minutes, played carrom board in the canteen while having breakfast, and again got back to work. We completed all the required cleaning before the predicted time. Later on, we took some photos of the school premises after cleaning them and also took pictures of all the members involved in the campaign. We collected all the equipment used, checked if anything was missing, and loaded them on the bus. We could see our efforts in the school premises. As for gifts, we distributed notebooks and pencils to the students.

By then, we all were tired and hungry. It was around 11 am when we completed our work, but it was too early for any restaurant to serve us lunch. So, we went for a walk around Patan. After about half an hour, we then went for lunch at a nearby hotel. We had a Thakali set. The food was very delicious. After rest for some time, we then returned to the office. It was a very nice experience, and I am very happy to be part of this campaign.

Prabish Kayastha
This was my first time participating in the DeerClean campaign, which was conducted by Squad A on Saturday, November 16, 2019. DeerClean is an event organized by Deerwalk with an end goal to make the society aware of pollution and how we can tackle it jointly. In other words, it is a small effort from Deerwalkers to clean the surroundings of public schools with the motto of ‘Clean Environment leads to Healthy and Beautiful Minds.’

The latest episode of this event was to occur in a public school named Adarsha Kanya School located at Mangalbazar, Patan. A huge number of individuals applied to join the event. The total number of people finalized was 44, which clearly shows the level of dedication toward the cause. It was decided that the time to reach the school was sharp at 7 am. So, I had to wake up very early since the school was far away from my home. Anyway, the day started with a very beautiful sunrise that made me even more excited for what the day had to offer. It was a cold morning. By the time I reached there, Mangalbazar was already filled in with a lot of locals. Some people were visiting the famous Shikhara Style temple, Krishna Mandir. Some were setting up their small shops. Overall, it was beautiful to be in Mangalbazar and its vitality.

Everybody reached the destination by 7 am. The total individuals of 44 were divided into 6 teams each having their own team leaders. So, each team decided on its territory to start cleaning. The event coordinator had brought all of the necessary materials like aprons, masks, hand gloves, broom, mop, cleaning cloth, and so on. Surprisingly, the amount of dirt we were expecting from a government school wasn’t as we have imagined. All the team did their best to make their territory clean. We finished cleaning in about 4 hours. This event was not just for cleaning the surroundings but having fun with your colleagues and making memories. We had a small but tasty breakfast in-between. Along with cleaning, there was an occasional fun happening. There was this little playground on the school premises. Some were playing on the slide, some were doing gymnastics in the monkey bar, and some were playing the swing. While sliding they were unintentionally cleaning the dirt with their pants.

Afterward, we packed the materials and went on a small walk around Patan. We also clicked pictures here and there. All that hard work made us very hungry. So, we went to the Thakali restaurant named, Thakkhola Thakali to have a delicious Thakali cuisine. We took some rest over there and headed back to our destinations. Overall, it was a well-spent day working for a noble cause than oversleeping and waking all groggy. I would like to thank Deerwalk for such a noble opportunity.