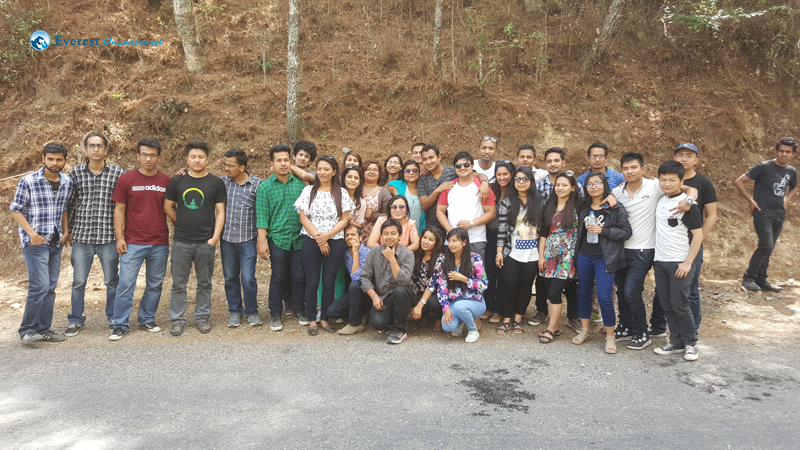 Shiwa Bastola
It was my first outing with colleagues. Many thoughts were racing through my mind, I didn’t really know what to expect. But,

being someone who loves to travel, I was really looking forward to the trip.

being someone who loves to travel, I was really looking forward to the trip.

The day of the outing arrived. At the office premises, I could see a lot of happy and excited faces ready for the trip ahead. We left Deerwalk premises at around 9:15 am. Music began playing and everyone was beaming with excitement. The party began in the bus itself, something I hadn’t really anticipated. Everyone started grooving to the music, turning, falling and laughing as the bus took to the twisting road. Midway to Daman, we stopped for a roadside picnic. Everyone was famished by then, so we all devoured the food hungrily. Then, to my amusement the coordinators had a game ready for us. Three teams were formed and the fun commenced. We stayed there a while and took pictures.

We reached Daman at around 3pm. The Everest Panorama Resort was a comfy and beautiful place. After freshening up, we started touring the place, taking pictures here and there followed by a tea break. The weather was nice and cool. We all gathered together and started playing dumb charades. Then, there were two team building games lined up for us all. We formed four teams and the games began. It was a lot of fun. Then came nightfall, which brought, drinks, barbecue, songs and a campfire with it dance. We danced to the tunes of the DJ, then gathered round the fire for a sing along session.

Next morning, we explored the area nearby and took pictures. After lunch it was time to head back home. The ride back was again filled with dance and fun. Overall, the journey was something new and refreshing for me. It was a great opportunity to interact and know everyone. I will look forward to more enjoyable journeys like this in the future.

Prakritee Tuladhar
Outings are always full of excitement, anticipations and relaxation. It’s a perfect opportunity to get away from the routine life styles and thoroughly enjoy ourselves. The team building outing organized on April 23, was one of those reprieves.

At around 9:30 am, we set off for Daman (Everest Panorama Resort), picking up colleagues on our way. The ride was long and hectic yet, full of entertainment, singing and dancing. We even had a short picnic on the way, and a team building game, Hula Hoop in the middle of the road 😀

Even more fun began once we reached our destination: more games, food and drinks; disco room; BBQ and bonfire; hiking with sore and aching bodies the next morning XD

Even more fun began once we reached our destination: more games, food and drinks; disco room; BBQ and bonfire; hiking with sore and aching bodies the next morning XD. It felt like the weekend passed in no time.

For me, the outing was a wonderful moment. Even though I (along with 3 others) was comparatively new, I did not feel left alone at all.