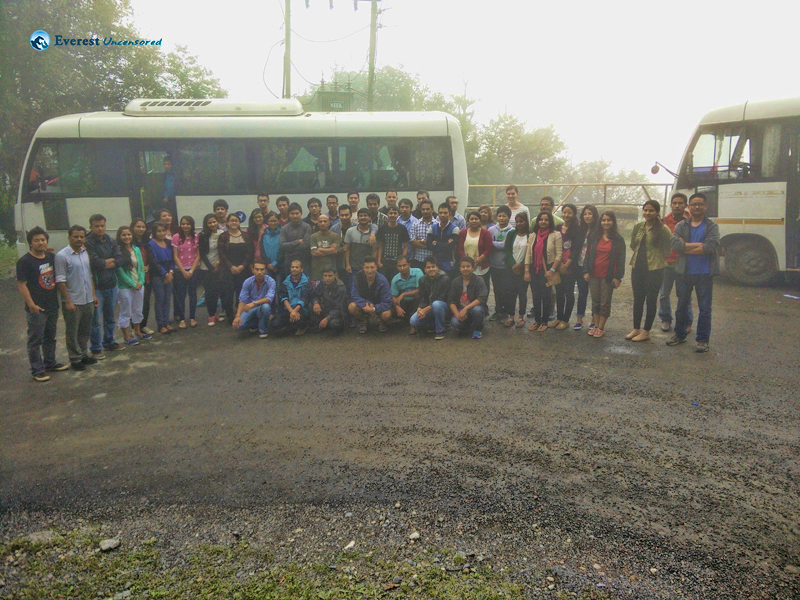 Hilary Towle
I was graciously invited to join the Squad D outing this past weekend to Panorama View Resort in Daman. Getting away from the noise and smog of the Kathmandu Valley for a weekend sounded like a wonderful reprieve, and I was still anxious to get a good view of the Himalayas. The weekend promised to be full of fun, relaxation, and time spent getting to know more of my colleagues at Deerwalk Services.

Having been on many, many team building and similar retreats for various organizations and groups I either worked for or was otherwise a part of in the states, I went into the weekend expecting similar activities—lots of team building activities, potentially some planning for the months ahead, and all-around structured time spent in a semi-professional setting. Deerwalk outings are actually really just that—outings meant to fully relax and simply have a good time with your colleagues. I kept waiting for the moments when we would all be called together and made to participate a trust fall or called into a room where pens and large poster boards littered the walls, but those moments never came. We did do a couple of fun games that involved teamwork, and the rest of the time was spent lounging, eating, drinking, and dancing.

Squad D sure does know how to have a good time. I felt very welcomed and well taken care of by the other people on the outing. My roommate for the weekend, Bijayasri, donned me with gorgeous mehandi and I enjoyed the one-on-one conversations I had with those I was able to talk to. This time of year isn’t the best for idyllic mountain views, so I’m still awaiting my picture-perfect view of the Himalayas, but otherwise I had a great time and enjoyed getting to know the members of Squad D better.

Mukesh Shrestha
Going outing was not my first time, however, It was first with Deerwalk team. So, what’s going to be at this time? Will this be different from previous experience? Many questions were tickling in my mind; New to Deerwalk Services, and still, a lot of people to know.

On 15th July morning (around 9:00 am), as the bus started to move so do the people inside, even more. People started to sing and after-while, some of them began to dance. So, party has been initiated from the start. Before stepping to Daman, (on the half way) we had a fantastic short picnic-type lunch. With mesmerizing crispy environment, drinks all around, rocking songs, dance with shaking legs, tantalizing food, awkward selfies and many more, made the trip to Daman very fun and interesting.

The most funniest and engrossing moment were in the resort “Everest Paranoma”, where we had a game in which we had to pop out the opponent’s balloon tied to their legs. Night hiking was very bizarre with intriguing horrible stories and little bit drama on the way. Birthday celebration at the midnight was also different. Taste of cake was somewhat bitter and later we knew rum was poured over it. So almost all were literally drunk by the day.

The next day we took the pleasure of natural beauty with many photo-shots and returned to Kathmandu. Coming back was quite silent and relaxed as the party was going to over.

Overall the journey was refreshing, enthralling, different from the other previous trip and memorable. This trip created friendly environment and got a chance to interact with everybody, made more friends. Now at the office, I have more friends, interact with more people and the working place seems friendlier. Outing not only provides refreshment and entertainment, it also creates a congenial environment in the work and among people.

Richa Manandhar
My first outing with Deerwalk team since I joined, excitement was on the top, DAMAN it was. About 9 am, we left from office premise and picked up colleagues at their places. And the fun began after passing Thankot.

Travelling in bus, with loud music and dance, I hadn’t imagined it would be that much fun. Neeraj dai started dancing and along with him Awesh, Pramesh followed. It was tough task for director of DJ to select masti wala, rocking type of songs. Although with some hesitation, we joined the dance group and started dancing in bus. About 12:30pm, we stopped to have picnic and joined another group from Umesh dai’s bus. We all were hungry so grabbed snacks and started eating. After small picnic break and photo session, Pramod dai started a game, BEER competition!! with two groups. And our team completed the task first and was declared the Winner. After that, we moved towards our destination continuing dancing and singing.

Finally we reached DAMAN at 3pm, the weather was awesome and so was the resort. We could clearly see the panorama view of mountains from the resort. After some time, we got the keys of our rooms and got refreshed to pose some clicks as we girls never get tired of posing 😛 . About 6 pm, team building game started, most of us participated and got the éclairs as prize :P.

After that we moved to disco, the best part of my outing. We danced like nobody was watching us, we danced too much that our legs were sore but who cares while dancing was the best part of the fun! 😉 We just took a little break from dance to have BBQ and beer then we were back to the dance floor. After Dinner, it was time for night hike which was quite interesting. We too listened “BHoot ko KAtha by Awesh & Pramod dai, Kapil dai“ at night time in middle of the road. I realized that this kind of outing is a perfect platform to share our experiences and know each other in a more personal level.
We celebrated birthday of Bijayasri & Bikram after returning from hike, and some talks before falling to sleep. Next day of mine begun with Yunisha’s scream, but I managed to sleep for some couple of hours more after that too. After having yummy breakfast, we got ready for some clicks and visited the rest part of the resort. At one part of the resort, there was a kid’s zone with seesaw’s, slides and swings and we hopped in like kids, played lots of games which we used to play during our childhood.

At about 1pm, we had our lunch and rested for an hour then we left for Kathmandu. Bus journey while returning was also full of fun again (teasing each other, dictating funny jokes).
It was an amazing outing and I am glad to be a part of it. I didn’t feel it was my first time, it was memorable. I’m sure everyone enjoyed thoroughly and I can’t wait to go on another outing with the team.