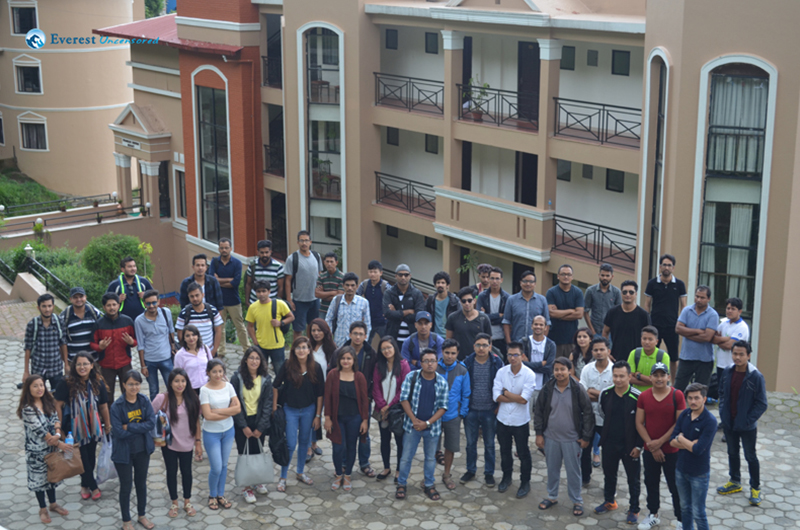 They say, we need to break regular habit to be more productive and energized for work. Therefore, Data transformers decided to take a break from data and logic and just have fun along with building bond between team members. The outing was set for Nagarkot. Bhangeri Darbar Resort was an excellent choice as it allowed view of beautiful Nagarkot.

On 22nd July, Saturday we started our journey from Deerwalk complex at around 12pm. Most of the people gathered at office premises while some caught their respective buses on the way. With great hype and expectation, we headed towards our destination. We spent most of our time by singing songs, dancing, laughing and joking. At around 2 pm, we reached Nagarkot, a beautiful village outside Kathmandu. The environment was beautiful and the weather was charming, we decided to spend some time near Nagarkot tower and also had some snacks. We also had some beer because why not? Some were busy in photo session. After that, we played a game called Balloon race. Two teams were separated for it. After the fun game we moved towards our destination, Bhangeri Durbar Resort. I must say, I was very impressed by the appearance of BD resort. The palace like architecture of resort attracted many of us. After distributing keys, people moved towards their respective room. We had some rest and also freshened ourselves up. We could see the green and stunning scenario from Balcony. The view was so relaxing. Then, it was the time for Team-Building games. We played a Snake game at ground. Monsoon rain disturbed us. Hence, we played rest of the games at Main Hall. The games were Cup and balloon (Cups should be push down with balloon’s air pressure), Cup walk (Blindfolded walk across the cup) and Mafia. At 7:30 pm we had our dinner. After having dinner the bonfire barbeque was started. Then the real party began with dance session followed by drinks. We stayed till late dancing, singing, laughing, partying and overall enjoying and then headed towards our room for some sleep.

We woke up next morning with the picturesque view of cloudy hills at the horizon where many of us found the perfect picture to decorate Facebook profile.

We woke up next morning with the picturesque view of cloudy hills at the horizon where many of us found the perfect picture to decorate Facebook profile. We had our breakfast at around 8 am. After about an hour of sightseeing and picture-taking, we prepared to leave. Before we returned to bus, we took our group photos. With all those beautiful moment spend at Bhangeri Durbar resort, we hit the road back to Kathmandu.

It was merely a couple of months for me at Deerwalk and I must confess, everything has been delightful for me over here. And this was time for a whole new experience, “Data Transformers Team Outing to Bhangeri Durbar Resort, Nagarkot”.

The most awaited adventure started from Deerwalk Premises at around 12 noon, picking up few folks along the way. Through the busy streets of Kathmandu, freeway of Bhaktapur and winding roads, we reached our destination. The weather was kind of pleasant that day, it did rain cats and dogs afterwards but for the time being it was neither too hot nor too cold. The team decided to have little fun before checking in. A nice meadow just below the famous “Nagarkot Tower” was a perfect place to have snacks and crack open few cold ones. After the short snack break we had our first team building game there, quite controversial at times but fun indeed. Few photo sessions later we headed to the resort and checked in.

After a few rounds of Uno in our room, it was time for more team building games. It started pouring just moments after the game called Snakes. So we shifted to indoor hall and played remaining games. The last game with murderer and innocents was definitely cherry on the top. We had our dinner at 8 and after that the real party started. It had everything, loud music, drinks, people who could actually dance and few people like me, who thought they could dance.

For someone new like me, it was quite amazing to discover this lively side of people involved behind all serious e-mails, “DSD-Check Ins” and “Code-Check Ins”.

For someone new like me, it was quite amazing to discover this lively side of people involved behind all serious e-mails, “DSD-Check Ins” and “Code-Check Ins”. The party lasted till we poured every ounce of energy or maybe, till the bartender emptied every bottle of beer, I’m not sure about that. Then everyone conveyed their goodnight and headed towards respective room.

Next morning, I was one of the few unlucky ones who dozed off till late and missed the view of majestic sunrise over the Himalayas. By the time I woke up, it was just cloudy. After breakfast, we rested in our rooms till noon. And it was time to head back home.