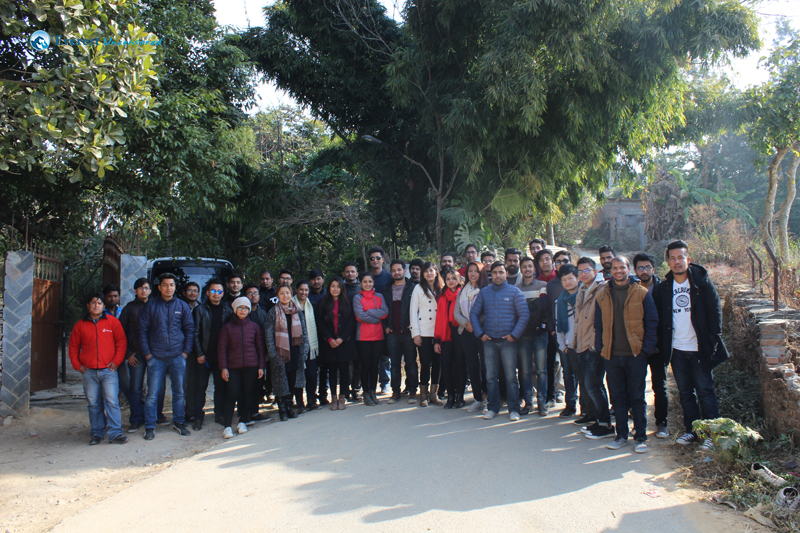 My first outing as data team was on 21st Jan, 2017. With great hype and expectation, we started our journey from Deerwalk Complex at 8:30 AM. After picking up all of the data team on the way we headed to our destination, Bandipur. We stopped for breakfast after crossing Kalanki and after some hours we had already opened the first can of Beer. We had our lunch at Chumlingtar at 1 PM and reached Bandipur at 3:15 PM.

My first impression of Bandipur was; a beautiful place with greenery, clean air and awesome view of mountains.

My first impression of Bandipur was; a beautiful place with greenery, clean air and awesome view of mountains. After resting for some time we had snacks and then it was time for team building game. After dividing the team into red and green, we started the game. Unfortunately, the team I was in lost all of the games.

After team building games we had some free time to visit Bandipur Bazaar. It was a simply beautiful place with the traditional and modern style mixed together. It was the cleanest bazaar I had ever seen. After that, we had dinner and headed for the barbecue and live music performance. Soon beer, wine, and Old Durbar were popped open and atmosphere got lively. After enjoying till late into the night we went to sleep. Early morning after breakfast we left for Kathmandu at 10 AM and arrived Kathmandu at 4 PM. I really enjoyed the outing and hope to be able to participate on all of the future outings.

On the day of January 21, 2017, the DA and SPT team headed towards beautiful Bandipur in Tanahun for two days outing. This was my first outing experience from Deerwalk. We set to start the trip at 7 am sharp. But the weather was so cold that some of us cannot arrive on time as their warm bed was not allowing them to get up that early. Though it got delayed, we left the Deerwalk premise at 8:30 am after loading our stuff on the bus and headed to Kalanki picking up other friends on the way. Our team was large in number with 41 members so we were facilitated with two buses. It was a long 5 – 6 hour drive to reach our destination. We made the most of the time by singing, drinking chilled beer, managing to sort of dance in the bus and basically being loud all the way. At about 11 pm, we stopped at Chumlingtar and had lunch. The food was delicious and being full and satisfied we resumed our journey. After that delicious food, I felt sleepy and woke up when I reached Bandipur.

It was 3:30 pm when we reached our Mountain View Resort located at Tundikhel. After freshening up and resting for some time we had our snacks at our hotel. Before it gets too late we need to finish our team building games fast. We were divided into two groups RED and GREEN and I was in the red team. The games were TIC TAC TOE, SWEEP THE GLASS and JUMP TO WIN (fastest plate collector), which were awesome everyone really enjoyed it and all games were won by the Red team. After the team building games, we went for an evening walk to Bandipur bazaar. Bandipur bazaar presents sightseers with a heady mix of history, architecture, incredible views, awesome caves and unspoiled landscapes. The stone –paved main street is lined with compact townhouses which are a major attraction here.

It was getting late and we decided to come next coming again to take photographs of beautiful Bandipur bazaar. After a good walk, we had our dinner and made a bonfire barbeque. Then our party get started with dance session, live music and drinks. We stayed till late partying hard and went to sleep.

Next morning when we woke up, we were greeted with a picturesque view of Himalayan ranges and view seems like we were above the clouds.

Next morning when we woke up, we were greeted with a picturesque view of Himalayan ranges and view seems like we were above the clouds. Then again we went to the bazaar to take some photographs there and spent some hours there. We returned back to our resort and had our breakfast. At 10 AM we left for Kathmandu carrying all the wonderful memories. We silently returned back to Kathmandu and reached the valley safely at 4:30 PM.

The outing was a great experience for me and for the entire team too. I’d like to thank Deerwalk and all the coordinators who planned such an enjoyable trip. This kind of refreshment program should be conducted frequently so team members can get closer with each other, recharge themselves after iterative works and build cohesion in the team.