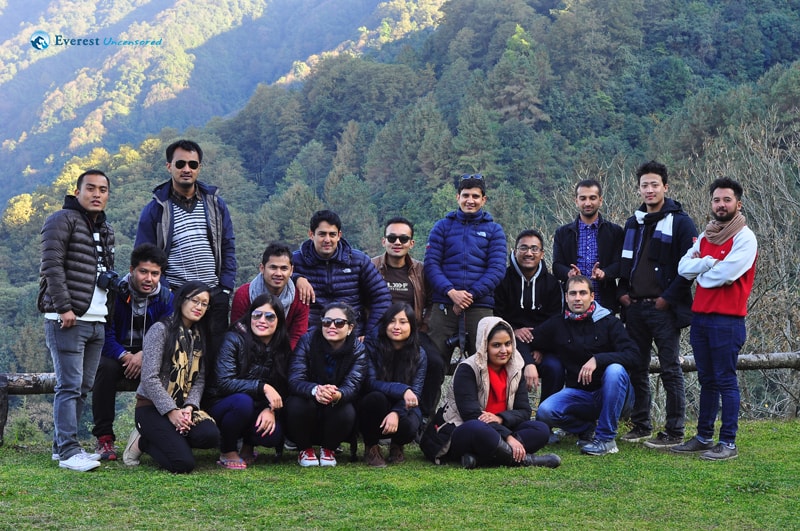 Saurav Rimal
The world is a book and those who do not travel read only one page.

It’s a great big world out there with billions of people, who each day live their life and have their own unique experiences.

I had the pleasure of having one such experience during the outing with QA team.

This was my second outing from Deerwalk and I was excited as usual. Our destination, Shivapuri village resort, was located around 20 km from Samakhusi. We picked up all our colleagues in the way and reached 2 km ahead of the resort at 1:30 pm. I had already started to feel the breath of fresh air having moved away from the city covered with smog i.e. Kathmandu. After walking for about 20 minutes, we finally reached our destination. The resort was nothing short of heaven. It occupied a large area which was superb for our team members to roam around and explore.

After taking rest for a short period, we proceeded with the team building games. These included ‘who blinks first’ and tic tac toe to name a few. The games were funny and socializing at the same time. Following this, we were served with delicious snacks. The timing could not have been better. The veg pakoda and boiled potato provided had only partially filled our stomach. Then came the exquisite, divine and mouth-watering barbecue. The resort staffs made sure that out partially filled stomach was full by now.

Everyone was in the party mood by this time. All of us started dancing and jumping to the music. I had the opportunity to discover the never seen before dance moves of my colleagues, thanks to Khukuri Rum. Most of us were exhausted after the dance. The dancing session was followed by dinner. After we finished up dinner, the dancing resumed and everyone was happy to show their moves once again. For me, the most memorable activity of the night was the ‘dohori battle’. There wasn’t a single person who didn’t smile during dohori battle. There was also a singing group alongside the dancing group led by Rajesh Dai.

Ultimately, everyone’s energy was fully used up and we headed to our rooms. After a good sleep, we were served with delightful breakfast in the morning. We bid farewell to the resort and headed to have our lunch about 3 km away from the resort. Following the lunch, we moved back to Kathmandu city. This outing was an excellent opportunity to get in close with my teammates and I look forward to having such experiences in the future.

Raksha Sharma
The Data QA outing was the most awaited event for my teammates and I. From several days, my whole team was busy planning and preparing for the trip. Having never been to Shivapuri before, I was eagerly counting the days for the trip.

The day finally arrived. We had planned to leave the office premises at around 11 o’clock in the morning since the travel duration wasn’t that long. I woke up early in the morning, did my necessary packing, had breakfast headed towards the office. At the office premises, I could see the joyful and bustling faces of my colleagues ready for the fun that lay ahead. Our departure was delayed by an hour as some of my teammates hadn’t arrived yet. We left for Shivapuri at around 12:15 p.m. We briefly stopped at Samakhusi crossing to buy some bottles and pick up Raghu Dai and Jenish from Tokha road.

As the travel resumed the fun began as everyone started singing and enjoying themselves.

Finally, we reached our destination ‘Shiva Village Resort’. Upon arriving, we freshened up and had coffee and cookies. After the light refreshment team building games started. The first game we played was ‘Gadget Race’. We were divided into two teams Scrub QC and Production QA. The competition was neck to neck but Production QA won the game. It was an interesting game but some rules had to be changed due to unforeseen circumstances.

We were really enjoying ourselves and taking lots of pictures so that no moment was left uncaptured. In the evening, there was a dance party followed by snacks, a barbecue and then finally dinner. The night then came alive when a ‘Dohori Night’ started between Surya Dai and team.

In the morning, some went to take pictures and some stayed back to the hotel to play cards. When all had gathered, we celebrated Swikrit’s birthday. Then, after breakfast, it was time to leave. We headed towards the bus which would take us to our next destination ‘Mountain View Resort’ for our lunch. After a delicious lunch, we headed back towards home. It was a very enjoyable and memorable trip.