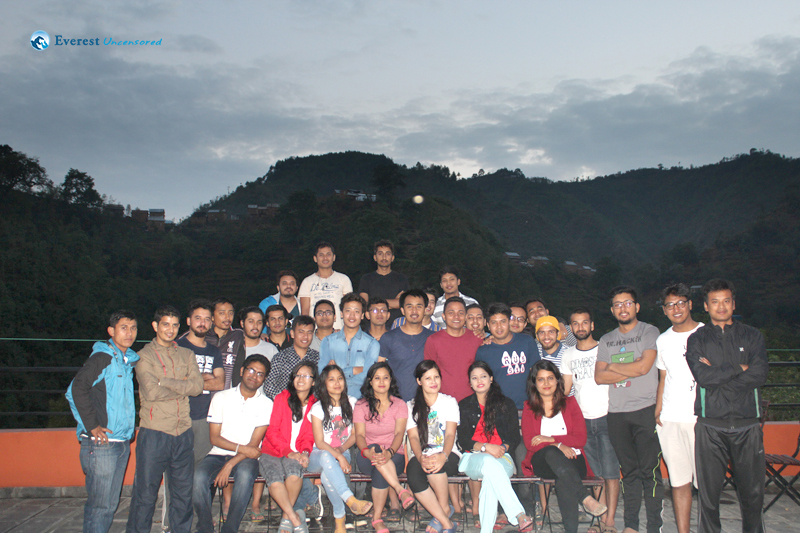 Jenish Sainju
I had been waiting for our trip to Balthali from few weeks earlier itself. The trip had been officially in plans since a week. Planning included the usual stuff like calculating the no. of team members and drinks per head and so on. When the final day approached, our team was all packed up and ready to go.

We all arrived at the office at 12 noon with smiles on our faces, and why not! A leave for 2 days and a night from the office meant no work,no dealing with day-to-day clients and no trace of our busy lives. There was only one focus point – the feeling of refreshment.

We moved from the office for our destination picking up a few friends on the way. Our fun time began from the bus itself. Everyone got up from their seats and danced to the tracks playing. To be perfectly honest, I was too drunk to notice all the places we passed to reach our destination. But I know that we reached Khopasi at around 2 PM from where we walked for about an hour to our destination. Our bags and luggage were arranged to be transported to the resort by a vehicle. So we enjoyed our walk freely without worrying about it.

The weather was pretty awesome too. Although it began to rain after walking for 15-20 minutes, we still had fun. We did photo shoots and there were drinks on everyone’s hands. Later it rained heavily and so we reached the Balthali Mountain Resort only at around 4 PM.

The weather was perfect, the one hour hike was amusing, the scenery was beautiful and all of that was topped with the sweet taste of victory. What more could we possible ask for? Yet,the night was still young and we were not even warmed up. What followed was great music and everyone were showing their unique moves to the beat. We all enjoyed the night with dancing, dohori, and barbecue around the corner with drinks flowing in. And I absolutely flowed with it – letting it carry me away to a wonderful time.

Nischal Maharjan
Just like we know, Coffee never knew it would taste so nice and sweet, before it met milk and sugar. In the same way, we are good as individuals but become better when we meet and blend with the right people. This outing was just a blend of mixture of party and fun loving people. Though this was the first outing with my team, the nervousness and sense of awareness which I had in my mind were all blown away by the coolness and calmness shown by the team. You have to be in discipline while at work but beside work you’re not bounded by any kind of rules. Young, wild and free principle rule really applies here.

To talk about the outing, well, I might not be able to describe it briefly as most of the time I was not in my normal state. The departure to outing was supposed to start at sharp 12:30 but Nepali time applies everywhere, so we departed from office premise at 1:00 (consider that was also fast 🙂 ) Bus picked everyone on the way and making two stops on the way, we reached our destination. Not to mention that all the way was fun as no one was seating on their seats, everyone was busy in drinking booze, dancing, shouting and showing their energetic moves. We reached kwopasi and started to hike which was supposed to be max of 45 min but it took us nearly 1:30 hour as we were stuck by the thundering rain.

This outing was just a blend of mixture of party and fun loving people.

Finally reached to our destination Banthali, place was more beautiful than expected. The weather was awesome for drinkers and wonderful for non-drinkers. As scheduled, refreshment drinks were offered and team games were played. After this the night was ours, the party was carried on with shots, shots and shots.

The outing was memorable, and you have to expect the unexpected. I hadn’t expected this much fun but it was all worth it. Those of whom who missed it, they not only missed the best fun with teams together but they also missed the best of the weather and wonderful place. History never really says goodbye. History says, ‘See you later.’ So, see you all later.

Rohita Shakya
It was my first outing at Deerwalk, so I was very excited. Finally, the long awaited moment had arrived. Being a nature lover, I was really looking forward for the trip.

We headed to Balthali Mountain Resort, at around 1PM. The journey was full of excitement and adventure. The bus “Exploded” with entertainment, all of my colleagues were either singing, dancing or cheering each other up.

At around 3PM, we reached Balthali, we hiked there for an hour and a half to reach our Resort. During our short hike, the essence of nature was showering on us through rain making it even more beautiful. I felt my lungs inflate with the onrush of scenery- air, mountains, trees, people. I thought, “This is what it is to be happy”.

Finally, we reached our destination, freshened up and had yummy snacks. The warm welcome and hospitality of the resort was 5 stars worthy.

Time for some exciting games.

We played the Team Building game called “Flip the Cup” between Scrub QC and Production QC, utterly entertaining. Then, we began the dance party with rocking hit songs followed by BBQ.

“Dohori Saajh” and “Dumb charades” games were Icing on the cake.

All in all, it was a great opportunity to get along with our colleagues. Definitely, a pleasure and memorable outing for years to come.

Subin Vinduwa
Outing to ‘Balthali Mountain Resort’ was a wonderful experience for me. As, it was my first outing from deerwalk, it give me a chance to establish a connection with my team. I was picked up on the way to Balthali at Thimi. When I entered the bus, everybody gets ready to party with the drinks in their hand. During our journey, different kinds of song were played. We were told that we have to walk 1 hour to reach Balthali Mountain Resort. It was great as we got a chance to hike. During the hike, we encounter two wonderful suspension bridge. Our hike was stopped for half an hour by the rain. But weather was clean and peace after the rain had stopped.

At the resort we get the warm welcome and after that we headed towards the respective rooms and get relaxed. After that we were offered with snacks and drinks. The main highlight of the outing was a team building game where we played ‘cup flipping game’ and our team won that game.

And the evening start with bonfire, music, dance, barbecue and drinks. Dohori was played between Raghu dai and Surya dai. The time during the dohori was the wonderful and entertaining moments. And after dinner some went for sleep and some stayed to have fun.

In the morning, some went for the walk and some remain in the resort to play cards. And after some time, we were served with the breakfast which consist of different items. After that we were headed towards the bus in the base.

Our plan was to have lunch in the banepa while coming back to kathmandu. So, we stopped at banepa and had lunch and come back to kathmandu.
I am very happy and grateful that I got a opportunity to be a part of this outing program.