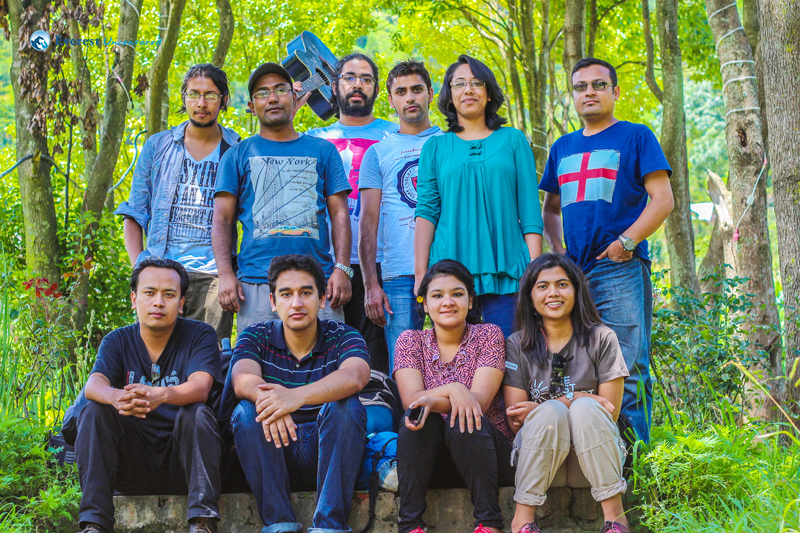 Avaya Prasad Pandey
My first outing with the team since I joined Deerwalk a monumental outing not just for me but for two of my friends and colleague. Like me it was Malika’s first outing too but on a somber tone it was the last team outing for Ankita who will be leaving to further her studies.

This would not be a dark cloud hanging over the team as our team treats new beginnings and goodbyes the same way, with cheerful optimism. Enjoy we would and that we did plenty.

First order of business upon arrival was to check into our rooms. Some of us opted for tents instead of rooms. We then started shooting of a short movie that Kanchan Raj Pandey had planned in advance.

We laughed, fought and shot each other making enemies in the movie but friends in real life.

We laughed, fought and shot each other making enemies in the movie but friends in real life.

Soon the sun was bearing down on us and it was time for a dip. Rain water made the pool less than ideal but at this point we didn’t care and we dived right in. We incorporated many games in the pool to prepare for the team game that was to follow.

Competition flared as one team was put against another, there was a prize on the line and bragging rights for those that needed more motivation. Team ABCD in one corner and Team WXYZ in another, blindfolded with nothing but team work to guide them. Team ABCD emerged the winner and claimed the prize.

With the planned activities finished we sat back, relaxed and just talked. Talking soon turned to singing just as day turned to night. The songs continued late into the night and we finally retired to our beds, we had a long hike waiting for us the next morning.

The hike to Pharping Water Dam was not extremely long but was still worth the walk for the view we were greeted with when we finally reached it.

Exhausted we got into the company bus to return to our homes all content and happy with good times.

Excited? Yes,I was pretty excited. You might say, “why is she overreacting?”. Actually, I feel the same, but it was my first outing at Deerwalk and with my team. Travelling does not require a lot of money; all you need is a good team and all of us were on because we had a reason to travel

Travelling does not require a lot of money; all you need is a good team and all of us were on because we had a reason to travel

; it was the swimming pool. Wanna dive in ?? haha.

Let’s talk about our route: We started off from Kalanki, then we went to Pharping, and then towards Dashinkali.
As I mentioned earlier, we had decided to make a short flim. On the way, our manager, Kanchan Raj Pandey, got a sudden burst of inspiration to shoot inside the van and guess what? It was me whom he had started with.

We finally reached our destination. The place was very quiet and calm. All you could see was the extreme beauty of nature. It felt like heaven. The hotel where we stayed was not like other hotels; it was a standard hotel. While our coordinators were busy arranging our rooms, we decided to play volley ball. Nimesh Deuja and I were on one team and Avay Prasad Pandey and Milan Loahani on the other. We were having fun, but suddenly Milan Lohani turned out to be “Krish” (Bollywood Superhero) and kicked the ball so hard that it got stuck in a tree. After the match was over, moved towards our rooms. There were also tents available, so some of us decided to enjoy the experience of sleeping in a tent and some of us stayed in normal rooms. We picked our rooms and tents based on personal preference. We then unpacked our belongings, had some rest, and gathered in one of the tents. Roll the camera and action..shooting time!

After the shooting we wanted a change, so we all started to head towards swimming pool. The water was refreshing and swimming was really fun. Then something absolutely amazing happened, it started raining. It was really fun . We filled our hungry stomachs with some junk food and cold drinks and recharged ourselves for the team building game. We were divided into two groups: ABCD and WXYZ; the game was really fun. Our team ABCD won, Hurray! It was then snack time. Plates served with delicious food were mouth-watering and we all gathered and sang, danced and had lots of fun. Then it was time for dinnner which was rice with yellow dal, cauliflower, tomato pickle and chicken curry served with salad. The food was overwhelming. Since one of our team members, Ankita Dev, was leaving, we decided to bid her farewell in Dashinkali style. Everyone was tired by this point so we went into our rooms. Since I was in a room with Arati Shilpakar and Ankita Dev, three girls together, the Kitty party was on! Wow! We had so much fun.

With sounds of chirping birds my eyes opened and Arati Shilpakar announced breakfast was ready. The smell of the food was so appealing that our eyes were wide open by that point. The food was not just yummy, it was mind blowing. After the mind blowing breakfast I really wanted to jump in the pool. Without any delay we went towards our centre of attraction, the swimming pool. After swimming in the refreshing water we went to complete the film shoot. Suddenly we heard a sound and guess what? It was our hungry stomachs. We had ordered rice, yellow dal, tomato pickles, fried chicken, saag, mixed tarkari, and salad .The food was great and then we took group photographs. The Deerwalk van was waiting for us, so we headed towards the van.