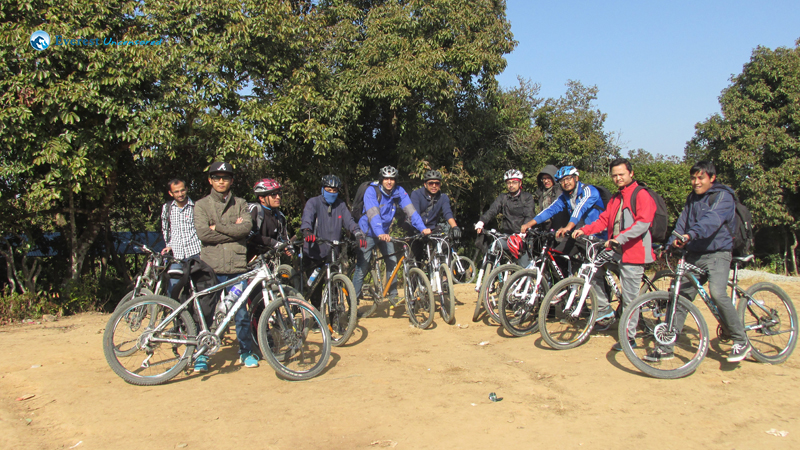 Dinesh Aryal
With the couple of official mails and some discussion about the route and destination, our cycling plan began. Everybody from our team was quite excited and happy waiting for 25th December 2015, which was the day we decided on.

Yes, the day came, the team formed and met in Chhetrapaati Chowk at 8:30 am in the morning. Some of us appeared there and we started our journey towards the destination. At Sitapaila Chowk some more participants were waiting for us to join the exciting, adventurous and joyful cold winter day. It was around 9 am, when all cyclists arrived at Sitapaila. No matter how much Kathmandu city is suffering from a shortage of fuel and energy, before climbing to the top of the hill above the valley we filled our empty tank with some energetic fuel like “bananas, chocolates and water.”

On the other hand, we all were enjoying and climbing uphill to touch our destination, “Switzerland park.” After 3 hours of cycling and hiking combination, we reached the top of the hill – Our Destination.

We refilled our lost energy with ten minutes of rest on the hill . Then, we returned back by passing the downhill. The 3 hours long uphill route which were welcoming us while climbing were saying goodbye in just 45 minutes. Finally, we reached Chhetrapaati choke at 4 pm from where our precious day began. We chilled our hot engine by putting some water and snacks and then, departed. 25th Dec will come numerous time in future, but it will never be like today. The memory of 25th December, 2015 will never be erased from my mind – “The day of new experience with good team.”

Om Hari Maharjan
We, Care Manager – squad B team, went on a one day cycling from Chhetrapaati to Switzerland Park and we had an amazing time. As per the plan, we arrived at Chhetrapaati within 8:30 am and started cycling without wasting our time.

According to Albert Einstein, “an empty stomach is not a good political advisor”.

an empty stomach is not a good political advisor

So without wasting time, we had some light breakfast at around 9:00 am in Sitapaila. Then, we started cycling with full energy and speed. It was a tough challenge for us to reach to the top of Switzerland Park within few hours, which seemed quite impossible at that time, with respect to our cycling speed. Being each others’ motivators, we reached Ramkot at around 10:00 am and there we had some light food. Then, the real struggle began as we would have to make an uphill climb for minimum one hour, but most of us were already at our limit and I also belonged to the strugglers’ group.

The area itself is wonderful – the scenery is breathtaking, the roads are in good condition and that was our ultimate motivator to move further and further. On the way, we took various pictures and videos of surrounding environment and ours in different poses, some of which are listed below.

We reached at the Switzerland Park at around 1:30 pm and the surrounding environment was indescribably pristine. After spending a few more time there, we proceeded downhill. We arrived at Chhetrapaati at 4:00 pm and then went to the NewRoad area to have heavy lunch. There, we exchanged our difficulties, experiences and excitement with each other along with the wonderful company of delicious Newari khaja and drinks.

At last, we really want to thank Deerwalk for providing us such opportunities and also to our coordinator, Santosh Devbhandari for arranging everything that was required.

5 thoughts on “Cycling to Switzerland Park via Ramkot”