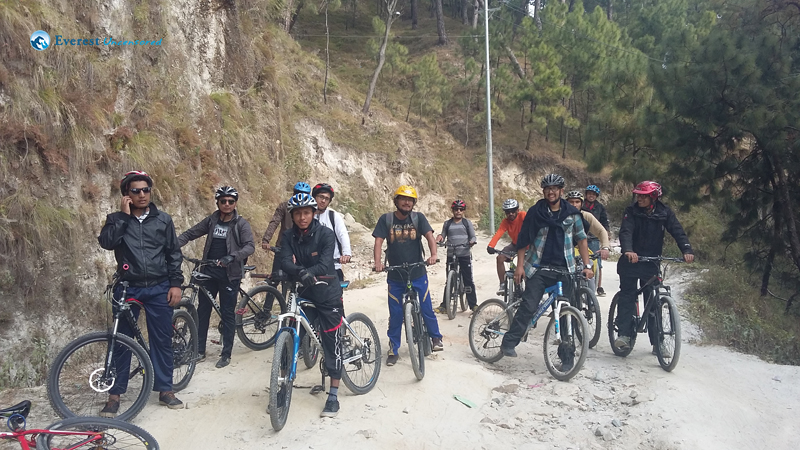 I was Excited and Happy at the same time, Excited because I have always wanted to go cycling, and Happy as it was the first outing from Deerwalk.

It was decided that the cycling team would be meeting at Chetrapati, Sorakhutte at 7 am in the morning. I headed towards my senior, Bikram Gautam’s house as his house is near from my house. Then, we went to our rendezvous point, where we were supposed to meet our other cycling participants. It was around 7:40 am, when all the cyclist arrived at the point.

When we were all set and ready to go, I was more excited because I knew this trip was going to be more exciting, thrilling and adventurous as our route was meant to be like that. Our cycling started at around 8:00 am. After snapping some group photos at the start point we, then, proceeded towards our first destination point “Budhanilkantha”.

We decided to have breakfast after cycling half an hour, so we started to look for the best place near by. Finally, we found a good place near Narayan Gopal chowk. It was already 9 am when we finished our breakfast. It was quite a fun too while having breakfast since everyone was cracking jokes. After having light breakfast, we then again, headed to our destination. As it was the time of the blockade, the roads were free from traffic, which made us to cycle more freely.

When we reached Budhanikantha, we entered the holy temple there. We rested there for a while and discussed which route we should take as there were several ways to reach “Tokha”. As we wanted to make the trip more exciting, we chose the route which was much more difficult and is actually meant for cycling.

Everyone one was good at cycling and had a good handle to it, that’s why the cycling became more thrilling. On our way, we snapped many photos and enjoyed the view alongside. At some point, we had to cycle very carefully as the way was sharply inclined where applying the brakes harshly was dangerous and we could have fallen down and could have got some serious injury.

We took different routes than it was planned and I guess that made our cycling much more thrilling and fun. The way where we cycled seemed like it was only made for cycling. There were pits, narrow lanes and stairs through which the cycling was much more fun and dangerous. After cycling alongside the forest route, we reached outside of the off routes at around 12:00 pm.

We were heading towards Jhor ,Tokha which was famous for waterfalls and a holy temple. As reaching, there was difficult since the route was treacherous both combinations of downhill and uphill. On reaching the jhor, the cycling was more difficult as some of us were not paddling. The sound of stomach grumping increased as we didn’t have lunch. After an hour, we reached at hotel near Jhor,Tokha where, we ordered our lunch and headed towards jhor as it was just 5 min from the hotel.

We huffed and puffed our way through the narrow off-road and on-roads and finally completed the uphill which probably used more than half of our energy. We then divided our group into two to look after our bicycles. I was in the first group so I along with my group went first towards the water fall. Since, it was the time of winter, the waterfall was not as we expected but it was a sign of relief after reaching there. We snapped, clicked some photos. Then we returned where our other groups were, where they were looking after the bicycle. Now it was our turn to look after bicycles. We waited nearly half an hour for them.

When they returned back, it was 2:15 pm which gave us a sign that we were out of energy. We then headed towards the hotel where we ordered our meal. There, we had a heavy meal. After having the meal, we took rest for a while. Around 3:15 pm we again planned whether to go for next route or not, as everyone was tired and lacked the energy for cycling more. Everyone, then showed the spirit that we should go to our next route ”Phutung”.

Now, the fun part had started. The uphill road which had troubled us had changed to downhill due to geographical landscape. On our way to Phutung, there was less uphill. The way was through the forests, villages as the people from the villages were waving hands to us which was some added fun and experience in our journey. Our journey was slowly ending. Everyone’s face seemed full, of tiredness, but there was excitement on their faces. Everyone was cycling at their own pace. We then reached Balaju at 4:30 pm where my house is. I then parted my ways with rest of the group after a wonderful, but exhaustive experience of cycling to Jhor which will be on our mind for the rest of our lives.

95 thoughts on “Cycling to Jhor Via Budhanilkantha”