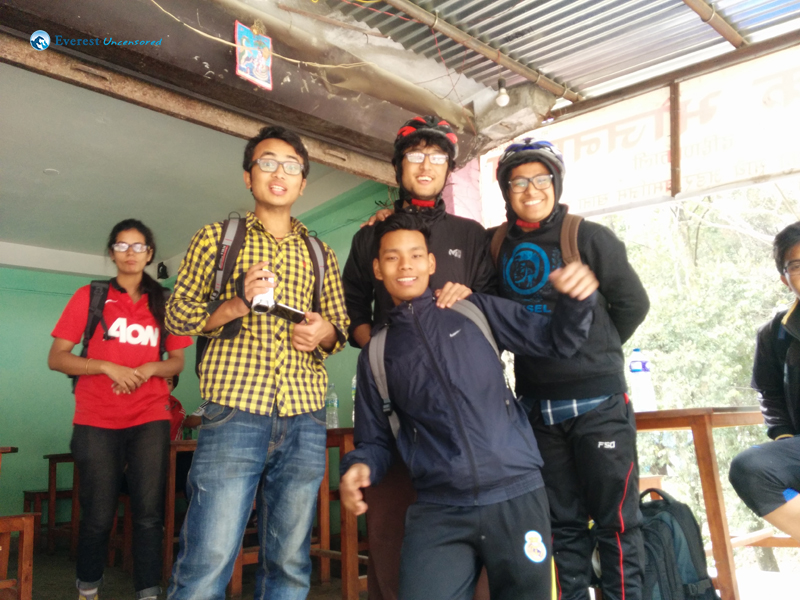 Sushant Chitrakar
We started the event from eight AM at Pulchwok where all of the cyclists gathered. Then we started heading towards our first destination, Bungamati. We slowly cycled our way through Ekantakuna, away from the bustling streets of Kathmandu. We reached one of the temples in Bungamati where we had some snacks. Then we started heading down steps downhill, which was not so easy to cycle through even for some experienced cyclists. It was unfortunate that Rojina didi fell down and broke the front brakes of the cycle. After that we were about to face the hardest part of the event.

At first we underestimated the uphill journey, but as we started going up with our cycles we came to know the full extent of the hill and we were all frustrated. We huffed and puffed our way through the narrow off-road and finally completed the uphill which probably used more than half of our energy. Then we headed towards Dakshinkali through a narrow pitched road where we had to cycle very carefully. At around 1:00 PM we had some light lunch. Some of us went to visit the temple while some of us were too busy eating. Then we moved towards Chovar. That was a very amusing downhill ride where some of us had so much fun speeding even if that was somehow dangerous. We had some spicy Chatpate too.

We also had planned to visit Kritipur but since we reached Chovar at 4:30 PM, we figured it was too late and all of us were tired as well except Bishal who has amazing cycling ability. Finally, we decided to finish off the event by having a meal at Kuleshwor. There we had a heavy meal, especially Raman, Sajak and Sushant. They ate half of the food we ordered. Nevertheless, the event was fun and somewhat tiresome as well.

Prajjwal Sthapit
DWIT Hiking club organized their first cycling event on 21stFebruary, 2015 taking 13 students to Daksinkali from Bugmati. The route of the cycling was set from Bhugmati – Daksinkail – Kirtipur. Every participant had to manage their own bicycle. So, there were two groups renting cycles. One group met near Jamal to gather their cycles led by hiking club’s Vice-President, Miss Rojina Shrestha, while the other group was at Pulchowk to arrange their cycles. The Jamal group started their journey towards Pulchowk at about 8:00 AM and reached there travelling through Ghantaghar, Maitighar, Thapathali. All the cyclists gathered at Pulchowk at around 8:30 AM. Then we formally began our journey.

We first headed towards Bhaisipati from Ekantakuna. The road was quite open which helped us to enjoy riding our bikes. The best part was the downhill ride which made the cycle go faster than other vehicles. But the only obstacle we faced during that particular route was the uphill we had to cover. It was hard and that left us with aching legs. At around 10:00 AM, we reached Bhugmati. After about half an hour ride from Bhugmati, we reached the famous Rato Machindranath temple. We then took some photos, videos and had some snacks. Then we decided to continue with our journey. But the road didn’t prove that helpful as it was full of gravel. So, a few of the cyclists experienced some difficulties to ride their bicycles. It was a dangerous combination of downhill and treacherous road. Then we reached the Suspension bridge of Bugmati River. Riding through the bridge was a new experience as it was shaking, making the cycle wobble and imbalanced. Then we reached Bansbari.

It was a dangerous combination of downhill and treacherous road.

Now the hiking part of our journey started as the path was difficult and unexpected. So we pulled our bicycles for almost an hour. Then we reached a highway which, was highway only by name as it was very narrow and the vehicle passing by was driven very dangerously. At around noon, we finally reached Bhanghyanj. The cyclists encountered few problems with their cycles like a flat tire. We repaired our cycles in the workshop nearby. We also had something to eat during that time. Then we moved towards the Daksinkali temple with energy after eating something. But the uphill road didn’t leave us. Finally, at around 1:30 PM, we reached Daksinkali temple. We were really hungry and decided to eat something. One group decided to start eating while the other group wanted to see the temple. But, since it was Saturday, there was a long queue of people.

After having some light foods, we decided to turn back and come home from Kirtipur. Now the fun part had started. The uphill road which had troubled us had changed to downhill due to geographical landscape. But the narrow highway was still narrow. At around 2:30 PM, we headed back towards Kirtipur. We finally reached Kirtipur at around 4:30 PM. Then we had our lunch at Kuleshwor. Then the 13 cyclists again divided into two groups same as before as they had to return our cycles. After returning our cycles, we parted ways to our respective home after a wonderful, but exhaustive experience which will be on our mind for the rest of our lives.

42 thoughts on “Cycling from Bungmati to Dakshinkali”