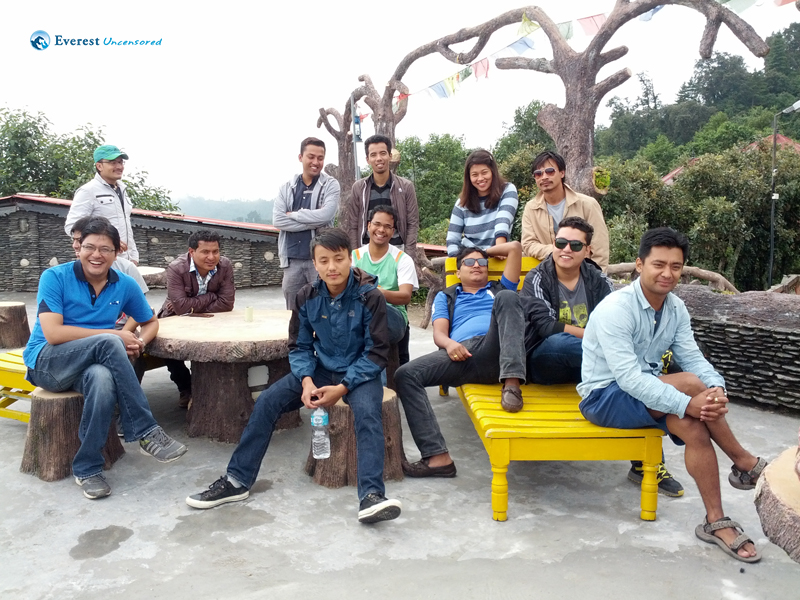 Srijana Maharjan
My outing to Daman from Deerwalk was truly amazing. It was amazing because this was the first time I went outing with my comfortable work colleague. We stayed in the Everest Panorama Hotel which was comfortable, cozy, had nice food and breathe taking views of the Himalayas. It was also nice because I got escape from the heat of the Kathmandu City to the cool hills of Daman.

Apart from the luxury and the view the activities we did as the groups were a lot of fun and motivational. We played games that brought us together as a team and achieve various goals. The “sing-off” between groups was fun and entertaining and gave us a feeling of break from work. After snack time was over we headed towards the discotheque and I almost danced till the last bit of energy left in me. The musical jam by the fireplace after the dinner was like an experience out of a movie.

Although it rained all night, the morning was sunny and clear which brighten up my day. The view of White Mountains in the Himalayas shinning bright in the morning sunlight was like being face to face with heavenly beauty. Since the bus little delayed, we went to a tower which was nearby and the view from the tower was worth visiting there.

The ride back to Kathmandu after such an enjoyable and productive trip was also important for me because I took that time to review the trip and think about all the things that I learnt.

Sunit Bajracharya
There are some trips that I had been to, which I wished never ended, and my first outing from Deerwalk was one of them.

I was really very excited for my first outing to Daman, as I had never been to the place but had heard a lot from others. And truly it is a must visit hill station. The trip was even more exciting as the road had lots of turns and outstanding sceneries. The Everest Panorama Resort was the place where we stayed for the night, which was a very cozy place in that awesome landscape.

As scheduled, we had few team building games, and I am very happy to share that my team won most of the games and filled our pockets with chocolates as rewards. As soon as the games finished, we rushed to the restaurant for a decent ‘Snacks and Drinks’ time. It was a Premier League match of United against the Spurs that added more fun. Then there was a ‘Sing-Off’ between two groups that went on till late in the evening. Others started to rock the discotheque, even on heavy-metal music. Meanwhile, there was a melodious jam session by the fireplace. My personal favorite performances were songs by Sishir Rai and Aakash Dai.

The morning was even more pleasant. As it had rained all night, it was sunny that cleared up the fog for an exquisite visibility of the Himalayas. We had breakfast enjoying the panoramic view of the mountains. After finishing up our brekkie, we began taking photographs, a lot of photographs to be honest and then we headed to Kathmandu. In all, this outing was a great experience for me and I can’t wait for my next outing.

Nisha Shrestha & Riya Karmacharya
When we heard about an outing being organized in office, the first thing that came to our mind was, if we should go. Being a new employee here at Deerwalk, we were not so excited because we only had few friends. Some of our friends told us that this would be a great opportunity to get to know others, and then finally we decided to go.

The place where we were going to visit was Everest Panorama Resort, located in Daman. We all friends decided to come to office for outing. We were called at office premises sharp at 9 A.M. and left the office at 9.30 with the feeling of excitement. We picked others at their desired locations. Escaping from work life for some time to bust the stress can be very rewarding.

Now comes the best part. After reaching Daman at around 2.30 PM, It was peaceful hills, calm and quiet. It felt like the city life had not yet touched this part of the Country. The resort was not like any others you get to see in Kathmandu. Panorama Resort offered comfort, tranquility and a range of outdoor activities unique to Nepal. It was an amazing resort with open spaces where you get the freedom of choosing where you want to sit and enjoy.

After short relaxation section we headed towards the outer space to play team building games. So all of the members were divided into 7 teams and we played around 3 games in which team 5 won the two games and Team 7(which was our group) won one game. After these team building games, we were all hungry so we had our delicious snacks. And then started the entertainment section, some of the members started singing some played cards and some went to explore the place and to those who were fond of dancing the resort had a facility of disco too. So, I including others went to disco to groove with music.

After rocking the floor with some really slick dance moves, it was time for dinner, followed by bon-fire. Well we all were nature loving junkies, so friends decided to stay outdoors for late night gossips. For staying outdoors we got a mattress weaved with hay, which was very cool. To be honest, it was a very good idea to stay in that mattress for some time. Don`t believe me? Try it for yourself. It made us cool, fresh, stress less and relaxed. With such an exciting day we all headed towards our room to sleep.

We woke up early, next morning because of our friends, who kept calling us for water. We couldn’t sleep so we decided to freshen up and get ready. We enjoyed the flower-clad grounds and shady natural tree areas. We relaxed in the garden for some time watching many species of birds, basking in the sun and captured the moments in our camera. While capturing a moment to make it more realistic, Nisha tried to pose with mule that was nibbling grass. That was when she accidentally got hit by the mule, which was very funny moment. Finally, we had breakfast and left the resort at around 12 P.M.