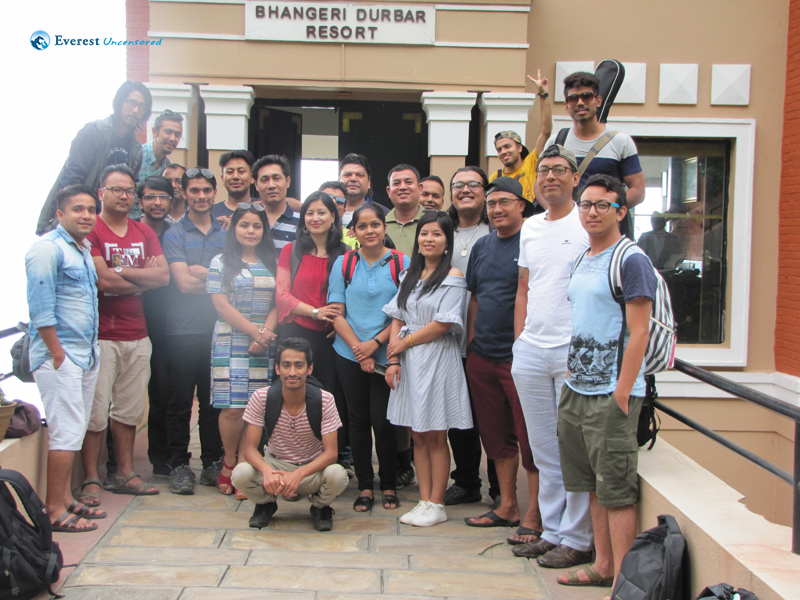 The third timer
So, we were much excited to get to Motel Du Muglin from a few weeks of plan. But unfortunately due to the landslides and difficult circumstances in the route to Muglin, we had to cancel our trip to Muglin, and opted this destination instead, Bhangeri Resort.

It was my third outing since I joined Deerwalk and weirdly enough, all of them have ended here in Nagarkot.

So speaking about the trip to Nagarkot, it started at around 12 PM from the office. We took our office shuttle bus. The day was kind of hot so we had some real juice refreshments during the trip. It was fun chatting and listening to the songs being played while in the bus.

In the middle after turning left from Jagati, is the turnover from where we go to Nagarkot. So we stopped at a place for some photoshoot. The view was just great. The hills looked so near. And in some time we reached our destination. The weather was chill, clouds were near. We got our shared rooms, took rest for a while and ready for snacks.

I was intrigued to know what things were getting planned for this trip, I mean the team building games and all recreational.

I was intrigued to know what things were getting planned for this trip, I mean the team building games and all recreational.

After the snacks, the coordinators had organized a team building game. The game was about finding cards which were hidden secretly by them and we had to find them out. Our team were the second best out of the four. So we won some chocolates. On the same day we were celebrating birthday of Mr. Saurav Chapagain who was with us in the outing squad. Earlier we had ordered cake form nearby office which we took there secretly. He was surprised. The cake was yum. We also played another team building game the same day, musical chair. But in that game we were playing as individuals, not as a team. It was fun to play that as well.

Later on, Pramod dai had a request to play a different kind of game. In that game one person had to dance with the music and could pick someone from the crowd. The second person would pick another and so on. In some bits everyone started to dance freely, enjoying the weather and the moods. Dance and music kept on going in no time that evening barbeque got started. Everyone was enjoying their time, dancing, music, eating, drinking, taking photographs of beautiful scenery and dinner was ready. Dinner was delicious as well. I specially liked the dessert. So in a while we chatted and was time to bed.

The next morning we woke up watching beautiful hills from the window. It was cloudy but still they looked so beautiful. Getting fresh and some morning cool air, we bumped to breakfast which was delicious as well. Before heading out, the coordinators had organized “Bingo” game for team building activity. Unfortunately I did not win any. We had to head out towards office as early as possible so we just took our lunch, rest, photo shoot and jumped into our vehicle.

August 05 2017, a day decided for an outing and venue was “ Motel Du Mugling ” firstly. I visited its website and I was eagerly waiting for that day and wanna experience ride on an all-terrain vehicle(ATV) which is only available there, besides team fun, swimming and fishing. All arrangements were set but just a day before a news became main headline in all media and newspapers and that was about Landslides and Traffic Jam in Mugling. So our coordinators suddenly arranged a meeting. Rather getting stuck in traffic jam for uncertain time, we prefer to change our location and after team discussion we have decided to go to Nagarkot and stay at “Bhangeri Durbar Resort”.

Next day on Saturday, I have arrived at office at around 11 o’clock with lots of excitements. We were from DA, Production, RE and IT Team participating on outing. So altogether we were around 30 in count and it was always pleasure having Pramod dai and Kapil dai with us. All members arrived at office by 11:45 am. All arrangements were set and finally without doing delay we headed to our destination at 12:15 pm from office. As we were heading to our way, we picked up our colleagues at their suitable bus station at New Baneshwor, Koteshwor and Bhaktapur. First song played in trip was “Kutu ma Kutu supari dana” and then many more. After getting everyone in bus, we started opening packets of snacks and drinks.

All of my colleagues were either singing, dancing, taking pictures or cheering up. That was the moment I thought the trip was going to be full of fun.

All of my colleagues were either singing, dancing, taking pictures or cheering up. That was the moment I thought the trip was going to be full of fun. After passing Bhaktapur District, road was steep and having lots of sharp turnings. As I had never been in Nagarkot before, I was also enjoying viewing natural scenarios seen from the window of our bus. Though it was monsoon, weather on that day was clear. After 2 hours of travel, we finally reached at our destination “Bhangeri Durbar Resort”.

The resort was looking great. We are welcomed and handed our room keys. As I entered inside my room, I have realized it is not only good from outer look but also from inside. The room was neat and clean with a balcony from where I can see the full mountain range, hillsides and villages. We freshen up and in a short time we gathered in common area and we found another outing team (Design team) from Deerwalk enjoying at same resort. Resort served us snacks. After that there was a surprising announcement of Surav Chapagain’s birthday. IT Team has arranged already for the birthday celebration of him. Since Pramod, Kapil and Saurav dai was coming in another vehicle, we waited for them to celebrate his birthday. We congratulated him with best wishes. Fun of outing began after our coordinates called us for games. We were divided into four groups and played treasure hunt game. After that we played musical chair game. Chocolates as winning prize is distributed but one is different it Vodka for musical chair’s winner and the winner was Saurav Thakur dai. After playing games in the evening, with cool weather, we sat around firewood. Some of us were either having BBQ, drinks or enjoying on dancing, singing, taking photographs, watching “Dulhe Raja” movie on TV. Around 9:30, we had our dinner which was so delicious. After dinner our fun hadn’t stopped yet, we continued dancing, singing, drinking liquor, playing cards. My colleagues were keep enjoying but I felt asleep so I went to my room around 11pm.

On next morning, I woke up early morning and freshen up myself. I prepared coffee for me and my roommate and clicked some morning pictures. After having breakfast we gathered in ground and played Bingo game. My unfortunate, I didn’t win any winning criteria of bingo but Production Team’s member Susma Pant had won the Bingo. We had have our lunch at around 11. Then we packed up our bags and left resort at 1 o’clock. I parted with my friends in New Baneshwor.

Though we had to change outing location from Mugling to Nagarkot in short period of time, I would like to thank to all coordinator for arranging such good, refreshing, memorable outing. I would also like to thank to our Driver dai, Rabin and Umesh for comfortable and safe driving. Thank you my amazing team, we made it memorable. Wherever we go, it’s people, not the place that makes our journey awesome and I am looking further for more outings like this one.