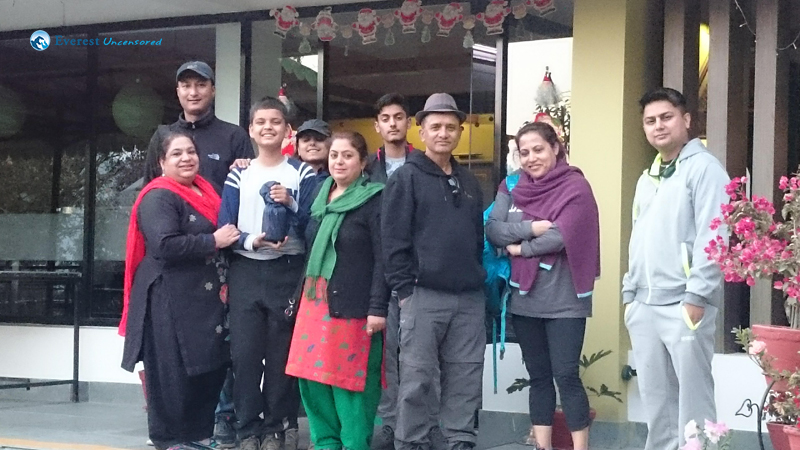 Priyanjana Bhattarai
Kathmandu in mid- December, the weather was cool in the morning. Early morning 6:30 am we were waiting for the bus to come and pick us up. All the while, we tested our legs on a short walk to the nearby park. This was our first hike with a group of people we barely knew (that is for my brother and me), the reason we were so excited.

After a last minute kit check of our rucksacks, we boarded the bus and got the pretrial briefing. A short bus ride, through Kathmandu city brought us to Karyabinak. We walked straight through this shoddy but interesting road head village and were off to the hills near the holy temple of Dakshinkali. The winter wheat was just greening due to the near approaching spring.

About 2 hours later we reached the Chandra Jyoti Power house. This power house was the first hydropower project in Nepal established in the year 1911. We went inside the 104 years old power house. The building has an antique design which overwhelmed us with pride, though we are still lagging behind in the hydropower sector. We took our first short break for morning breakfast. Breakfast included nepali style masala potato and boiled eggs.

Gathering all the energy we could from our breakfast, we started the second part of our trail. We had to reach the Pharping water reservoir. 2,000 old stone trails make up the trial. This was something that we were not aware of. After some 1000 stairs we saw some beautiful plants, one of which was the famous Dhatura Plant. This sparked a small discussion of the modern day medicinal usage of psychedelic plants.

We arrived at our destination after a long sunny walk through all of those stairs. A lot of people were still lagging behind so we bought some donuts and oranges from a small stall and ate it. The donuts were delicious and the oranges disgustingly sour! Next was a still uphill but a much gentler trial through all the Hog Plum “Lapsi” forests. This is a ‘hobbit county’ with little streams making lovely rest spots.

We were so enchanted by these beautiful sceneries that we lost track of the trial. So we had to ask the villagers for directions. The kids agreed to show us a shorter path only after we promised to give them snicker bars. We continued for another one hour. In between we faced tiny obstacles. These became funny memorable incidents for us. One of which was a bridge made from a single wood. Woah! It was like we went for the show ‘Roadies’ to perform such tasks.

At last we reached our final destination which was a small town near Dakshinkali. We decided to go for lunch at Chaimmale resort. A treat was waiting for us after our long tiring never ending journey. Lunch and a failed attempt of the mannequin challenge was the end of our journey. We headed back to the bus towards our homes where we would all sleep like a baby.