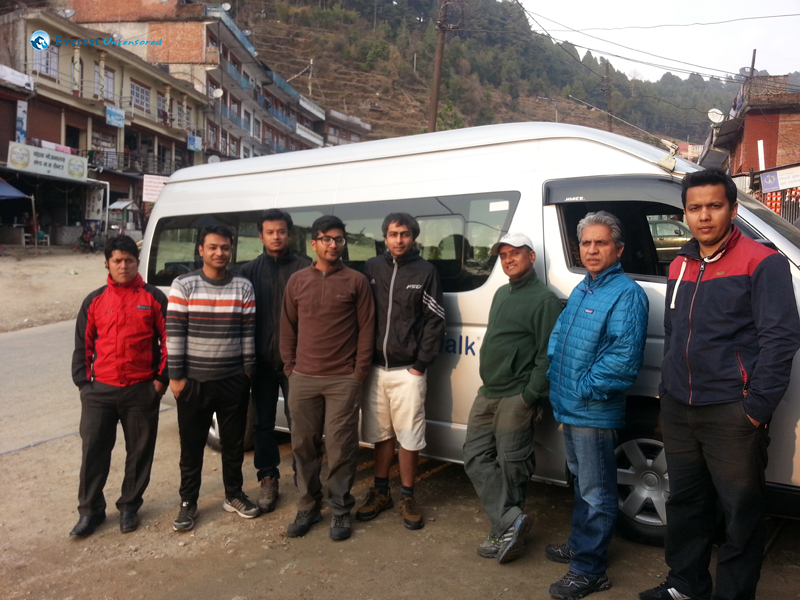 Prakash Chandra Joshi
Fear of the unknown is the greatest fear of all, and to be honest, I was a little skeptical about the trip that was planned with the upper echelons of Deerwalk, what the trip would hold and the destination was also unfamiliar and was touted a difficult trek. So, me with those doubts, along with other members, gathered at the office premises at 12 noon and by 12:30 we were in the office van the journey had started.

From the start of the trip, Rudra dai was making us more cozy with his mild sarcasm and with the gossips, we started enjoying the Outland scenery. The Temperature was high, we were thirsty and hungry, so we decided to grab ourselves a couple of drinks and snacks at Sarmila Didi’s hotel, somewhere around 0 kilo and then continued the trip. Then, again we continued the ride to Charikot with a stop at Mude to grab a glass of tea with gossips. After an exhaustive ride for about 6 hours we reached our first destination at Charikot, then started an inquiry with the locals to find a hotel to spend the night in. After hopping round the Panorama and Kings hotel, we found hotel Kuber to be the place to spend the night. We made ourselves cozy in the rooms allocated and had a small trip to the Charikot market to shop for the trek ahead. At around 8 pm, we gathered in the dining hall, warmed ourselves up with a couple of drinks, with some of us playing cards and others continuing with their conversations with each other. Then, we were served a sumptuous Nepali style meal. After the meal, we all went to our rooms to get much needed sleep at around 10 pm with our alarms set for 4 am as we planned to start the ascent early at 5 am.

So, early next morning at 4, we packed up and left the hotel around 5. So, with torchlights to guide us, we started the real trek from Charikot. One cue for all trying to get to Kalinchowk from Charikot, follow the electric polls from Charikot which will lead you to Kuri Bazar. That was exactly what we did and gathered our pace. After a couple of hours walk, we had tea and light breakfast at Deurali, and at the same time, many of us didn’t notice but a small earthquake tremor was felt. Without even caring about it, we walked past the Deurali bazar with small breaks to catch our breath. While enjoying what nature had to offer and each other’s company, we slowly moved to the Kuri. The weather that day for the most part was great, but around 10, the weather got dark and began to rain with strong frosty wind, and before we knew the snow was pouring down upon us. And there was this point in the trek that was particularly magnificent with the snow pouring down, with the backdrop of the majestic scenery behind, something out of the movies. Then, at around 2 we reached the only tea shop around, where we enjoyed tea and some great snacks and then moved forward with the trek to Kuri. So after 35,000 exhaustive steps, 22 km (recorded from our fitness band), numerous shortcuts finally Kuri was in our sights. Nothing can compare the satisfaction it brought us to see that magnificent valley lying below Kalinchowk, as it was our destination for the day. We booked three rooms at the Kalinchowk Country Villa, which was all made of wood. I would greatly recommend the villa as it was nice and cozy and the food was especially good, especially Chicken and Mushroom soup. We reached the Villa at around 4 pm and had a couple of hours at the hands, so decided to take a stroll down the local market. We then gathered around the wood fire with conversations fueling the stay. Prasanna dai was given a special task to tell a joke, which he is still preparing. Then at around 8 pm, we had our light meal and then took our much needed rest as the trek to Kalinchowk was planned for 5 early morning.

On the final day, we started the early morning trek at around 5 on the stony pathway with torch lights lighting the way. Slowly and steadily, counting the stairs we were headed to our last destination Kalinchowk Temple. Slowly the high altitude of 3800 meters got better of us, but that didn’t stop us. Slowly and steadily we ascended towards the temple and at around 7:30 we reached our final frontier, the Kalinchowk Bhagwati temple. The view from the top was if words do justice: Majestic.

The view from the top was if words do justice: Majestic.

The whole Gauri-Sankar and Ganesh Mountain range, was just in front of us with the slight morning ray spreading light orange color onto them. After praying we started the descent to Kuri. Within half an hour we were in our hotel rooms, packing for the journey back home. We had hired a Jeep to take us back to the Kuri which left us at Makkai Bari where Deepak dai was waiting for us. Then, after a lunch at Mude we got back to our way back home and were in office premises at around 5 pm.

The trek to Kalinchowk in itself is a wonderful trip that you must make, and this trip in itself was made more wonderful by great company, great stories especially from Rudra dai, Pramod dai and Surendra dai.

5 thoughts on “Hiking from Charikot to Kalinchowk”