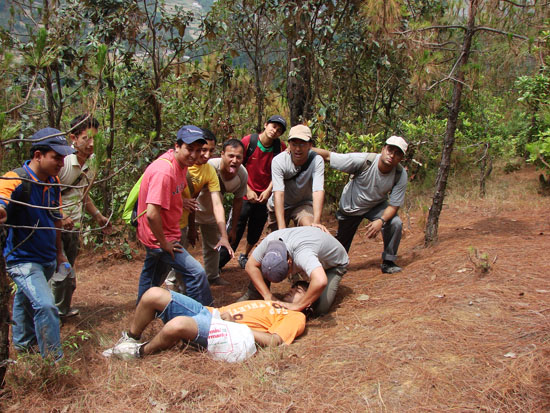 Hiking Description:-
It was almost 7:00 am of Sunday morning when all the hikers had arrived to Office. Previously, hike was planned from Budhanikantha to Shivapuri, but due to zero participation of lady hikers, we planned to do a bit tough hiking and chose the route of Chapagaun to Lele. At 7:10 am our office van picked us from office premises towards the hiking start point. As every hiker’s stomach was empty, we stopped at Jawalakhel and find hotel named “Badri ko Khaja Pasal”. After stomach was fully loaded, we again started our journey. After half and hour journey via Office van we reached to Chapagaun, the starting point of our hike. We took jungle way. There was no proper path that we can follow in jungle so we randomly moved discovering our own way. Though jungle way was very steep and difficult to climb up hills, we never lost our serenity. We were so lucky to taste delicious fruit in jungle i.e. “kafal”. Thanks to Binod and Awanish who managed themselves to climb “Kafal” tree and pick “kafal” for all. While we were having “Kafal”, “Kafle Lava” dai frightened every one saying “What will we do if Tiger comes here”. Everyone gave their views but Lava dai gave the most promising view. According to him, four of us will catch four legs of tiger, other two will catch its body, other two will catch its tail and remaining will pour alcohol i.e. beer in its mouth. After having beer, tiger will become “Jhaap” then we will take photo embracing it. Romantic talk was over; we began to climb up and up. We were lucky that weather was on our favor, atmosphere was cloudy so we didn’t feel too hot. After climbing hill for 45 minutes, we reached almost top. We did not find proper way to reach Lele. We used Hit and Trial method to find way to Lele. We decided to climb down the steep hill. The forest is of pine and ground is covered with its leaves which caused difficult to move down the steep path. We began to skate down. Almost all hikers fell once while skating down. Bikesh won first prize for falling down many times. Congratulation!!! Bikesh. After almost one hour skating practice we finally reached the main road. Later on we came to know that the name of area from where we began to skate is PIA. Environment of PIA is cool and naturally rich. From PIA we reached Lele village. As usual, we searched local school to distribute copy and pencil to students. Finally we found school named ‘Shree Maneshwori Primary School”. We distributed all copies and pencils to little students of that school and took some photos with them. There after we walked towards Thapagaun a nice village. People were busy in harvesting wheat from their fields. Moving through wheat field we reached to a lake with clean water. We washed our hands and feet there and took rest for a while. Still we had a lot of time so we decided to climb other hill of Lele. After another 45 minutes of walk through hill, we reached Lele Bazzar. Moving up through Lele Bazzar we reached Saraswoti Kunda our end point of hike.

Everywhere we searched for a good hotel to have lunch. We were unable to find any suitable place. Finally we met Parwati didi who helped us finding the right hotel for our lunch. Ravi enjoyed talking with the 65 years old woman. She was having some food with us as well. After having lunch we were headed back to Kathmandu. It was really funny and humorous hike.

06-Someone might be watching us say hi to them

08-A Glimpse of Lalitpur district

09-Engineering skills of the machine

11-We are the champions

14-Destination not so far

17-it was really cool weather

19-Help!Help! Please someone help me

27-Is this enough for me

28-this much is enuff for my stomach

29-sanjeet dai- We must reach that hil, lava dai- no we have walked a long lets make it short

30-ohh noo how can i walk such a long distance

31-prajwal dai- come on lava ji we must go now

32-can someone lend me a bottle of waterplease

33-Bikesh n Shamesh on the way

34-Crawling down towards Bhairab Kunda

36-Getting ready to slide

38-Lost in the nature

41-Ready to take off

46-Finally we found it

52-Photography at its best

62-What are these guys looking at

63-Our only food in the jungle

67-binod… i love hiking.. hiking is in my blood

71-It was such a nice place

75-Now no one lives there

78-on the way to sarswati kunda

82-Happy Awanish after a long walk

84-Parbati didi, who led us to the hotel

86-Any wish before execution

87-Awareness board of LELE

89-everybody enjoyed the hike

38 thoughts on “Hiking from Chapagaun to Saraswoti Kunda”