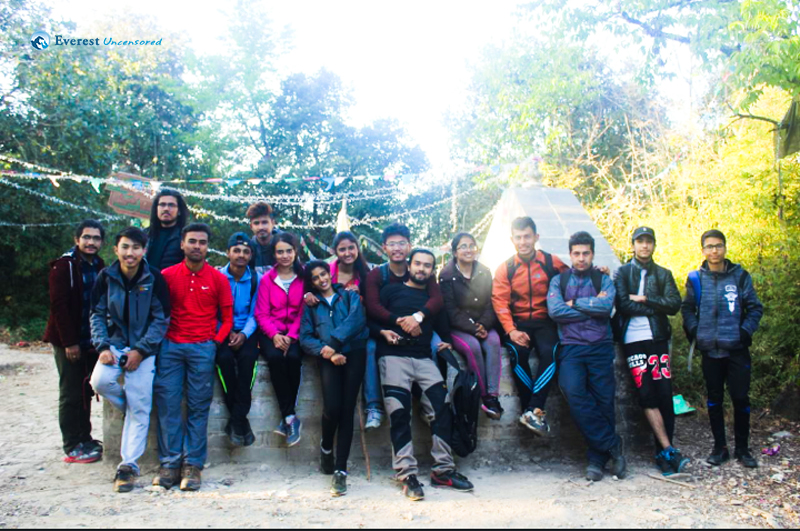 You don’t get a lot of this on trails near town: the feather of spider’s silk on your calves that tell you you’re the first to pass this way.

We got some of that on Machchhegaun – Champadevi – Taudaha Hike. On December 17, the hiking club organized a hike from Machchhegaun to Taudaha visiting over Champadevi theeastern summit, after the resident of goddess which is the third highest hill around the Kathmandu Valley and is at the height of 2278 meter. All the hikers gathered inside Deerwalk Complex around 6:30 – 7:00 am, with loaded backpacks and were excited and enthusiastic. Due to some circumstances, the driver arrived late so we have had our breakfast and coffee for a quick boost near the college area. The College van departed towards Machchhegaun at 8:00AM. The College van dropped us at Machchhegaun, but before our expedition began Surendra Sir briefed us the basic protocols to be followed during the hike.

The hike started with some guidelines by consulting few locals. At the initial phase of the journey while walking up the hill, the tracks were normal and we were having a normal hike until a quick break for some snacks. Then, we again started to walk. Slowly after walking for a while, we realized that we had lost our tracks but didn’t stopped our move.

The walk was getting more difficult and scary after every step and had to make our own track.

The walk was getting more difficult and scary after every step and had to make our own track. At a particular moment, we observed and felt some wild animals crawling around us and we were very scared but we acted strong as a team and luckily, we got no harm. Then after a couple of minutes of walk, we finally reached the top of hill and found the track. We rested there for a while and had a beautiful sight-seeing of the entire Kathmandu Valley. Then, we left for chamapdevi following the tracks and rested there for a fast worship and later finally reached Taudaha after 9 hours of walk. The walk was adventurous, thrilling and breath taking and could not make it to the trial without each other’s support.

A delicious thakali dinner at Lete,Naxal marked the end of this adventurous and unforgettable event.

Hike of Champadevi was one of the most intense and thrilling route I had ever been on my entire life. The whole event happened on a one day hike on 10 December 2017, on Sunday. It was the second hike that I had gone from Deerwalk. Champadevi is a small temple located on the top of a small hill between Kalanki and Kirtipur. We were at Deerwalk Complex at 6:30am sharp. After having breakfast at a nearby shop, 17 members selected for hiking left Deerwalk Complex at 8:30 am. Due to the intense traffic in Kathmandu, we reached the outskirts of Kathmandu at base of the one of the hills nearby of Champadevi. Actually the hike route was going to a top of the hill near Champadevi(which was the third highest hill around Kathmandu valley(2287m)). Then we would climb down the hill and head towards the lower hill of Champadevi.

So we started the hike from 9:30am through a trail that seemed like very few people had hiked. The area was covered with jungle. So we planned to stay in group and walk. After walking for about 15 minutes, we could already see Kathmandu Valley and the zoomed up mountains. The climb was super steep with almost an inclination of 120 degrees. The ground was full of leaves which made the ground slippery. Moreover my shoes had no grips on its sole, so I started slipping and the beginning of my journey. We climbed up for almost 2 hours on the steep hill. The stones kept falling from the top as the hikers stepped on it. So it made the climbing more difficult than we thought could be. After a heated 2 hour climb, at around 12 we reached the mid-hill. We had some lunch there on a small flat area. We could see the dusty Kathmandu city from a small notch between the trees and the bushes there. I felt bad for Kathmandu to see it so polluted. So after having lunch and getting ready for the next part, we planned not go for the top of the hill but rather go towards the destination to save time and our energy. We thought we had very tremendous hike during the climb. But the remaining part was more dangerous and exciting than I could have imagined.

We started to go sideways through the hill. But there was no sign of any visible tracks or trail. So we decided that we would build the track ourselves and reach the destination. Our leader and some seniors started cutting the bushes and made a track finding easy places to walk. We were struggling to walk when we reached a dead end. The end was so frightening. There was a steep fall below and one mistake would bring us down to the base of the hill (almost 500m). So we knew there was no way to go back through the track because we had already walked for 2 hours. We planned to head directly to the top of the same hill by climbing the steep hill. It was already 2 pm and there would be nightfall by 5 pm. So we were thinking that it be big deal even if we returned back to our home that day. But keeping our hopes alive, we started to climb the hill straight upwards hoping we would the catch a trail. We struggled and climbed by clinging to the branches and taking help from other people. We went through the dense bushes and spiny thorns which ripped many people’s clothes. Some even punctured my skin. After a dreadful climb, we reached the top of the hill.

More to our surprise, there was stone paved tracks, stairs and even picnic spot. You couldn’t think how relieved we were.

More to our surprise, there was stone paved tracks, stairs and even picnic spot. You couldn’t think how relieved we were. Moreover, we were welcomed by the Kathmandu Valley again which looked so large from up there. The planes flew equally to our level. So we started going downward through the stairs. Our legs were weak by now and we were tired. But we needed to reach at the bottom where the bus would come to pick us up. We were walking when we reached a junction, we found sign boards which gave the way to get to Champadevi temple. We reached the temple at around 4:30. The temple was very small than I had thought. After taking some rest there too, we started going straight downhill and by 5:45 we had reached the base at Taudaha which looked beautiful with the reflection of the lights of the hotel nearby. Our driver dai stood waiting for us at the base. We then went to Naxal were we had dinner at Thakali. We also reached our homes safely by 8:30.