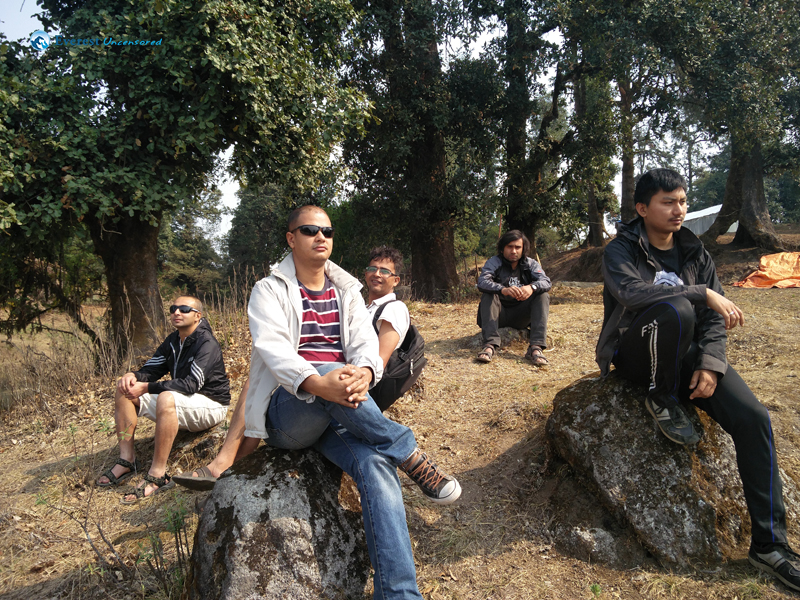 Lava Kafle
April 30, Day I: Early morning, Gautam had to continuously call and SMS Lava to pick him from RataMakai Chowk Imadol, Lalitpur around 7:30 am. All necessary items were loaded and Van was ready. Lekhnath had already arrived at Dillibazar corner, when Gautam dialed his number to be there.On the way, we picked up Prasanna from Nepal Police HeadQuarters turning. Dinesh and Vivek were on the next list to be picked up as they were nearby same riverside 1km before kalimati.The long journey began after reaching a popular hangout of Naubise, Kavreli restaurant, who were as usual very happy serving Deerwalkers since years.

Then, the blacktopped road started winding away into deep mountains, greenery, scenes, and wilderness.

Then, the blacktopped road started winding away into deep mountains, greenery, scenes, and wilderness. Finally, it came to stop when we came across children selling box Myrtle,or Bayberry(Kafal in Nepali) and Rubus ellipticus commonly known as golden Himalayan raspberry(Aiselu local name).We bought alot from those children and they were really very happy to have customers like us.Finally, we reached our hotel Himshikar, Sim Bhanjyang, 2488 meters and ordered our meal. After waiting for sometime, we were served with tasty meal. As Lava was not feeling well, he went to sleep and the rest of the team was led by Lekhnath into the deep woods, and then to cave, where the team donation was presented. They meditated for 1 hour there. While the team was out in the woods, Umesh dai was guarding Lava. So, there was nothing to worry about. The team returned back and started extra curricular activities of excursion, which was quite entertaining. It was already 2 am, when the team went to sleep. At the same time, sleepy Lava woke up. There was a huge outburst of happiness exchanged.

May 1, Day II: As mentioned above, Lava woke up at 2 am while the rest of the team went to sleep. After asking for change, Lava waited for public bus to Kathmandu at 6:00 am for thesis finish program. He totally forgot, it was Labor Day and there was a nation wide public holiday. While waiting for the bus, he met his friend, GM of Vega Pharmaceuticals. He took his friend to introduce all his team, who were still sleeping. Lava was finally reminded of the public holiday while having tea, he laughed and seemed very happy. Lekhnath appeared out of blue after meditating the whole night in the cave in deep jungle instead of enjoying the hotel facilities. He gathered us, we had meal and left the hotel. The hotel owner was glad looking at the expenses we made, we were probably the first customer to have such a huge bill. Vivek was entrusted to be the manager of our outing and Gautam co-ordinated the efforts, so they payed the bill. After clearing the bill, we happily moved down-road curving into green and dense jungle, natural, misty and awsome paradise. Again, on the way, we encountered similar group of children selling kafal and Aiselu. They too regarded us their big customer as we emptied some of their sales right there. We had a small break on the way and then, were were in Kathmandu bidding good bye to each other out of bus.

7 thoughts on “The BlockHead ResearchLab Deerwalk Team Outing to SimBhanjyang”