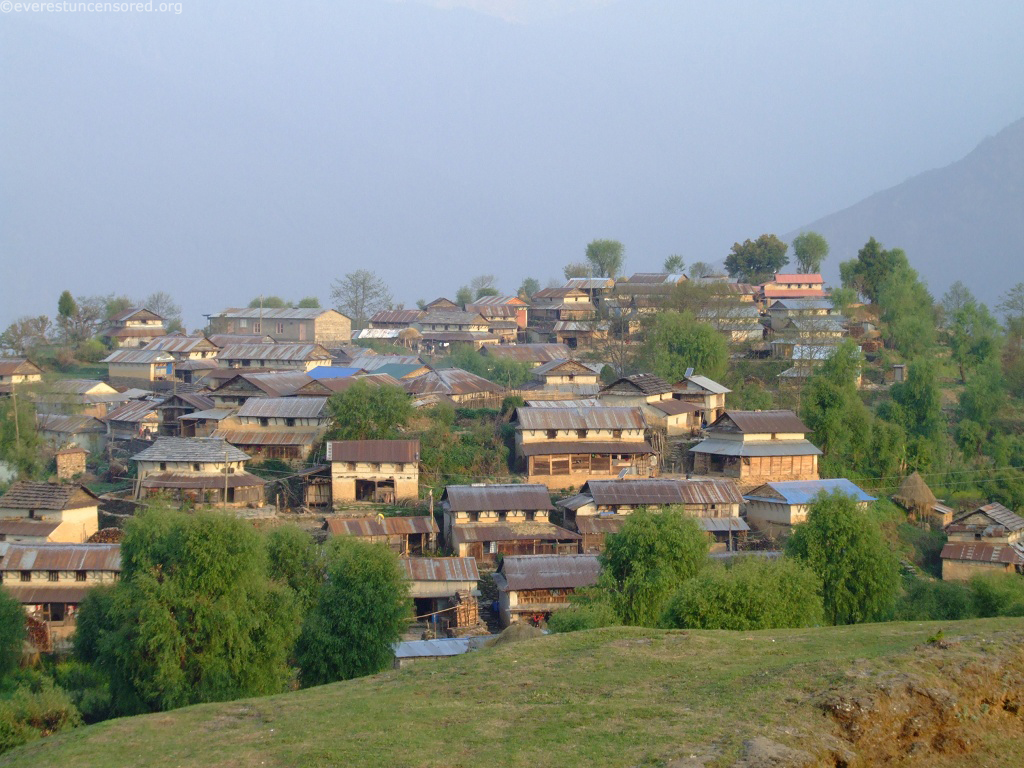 “ We talked of Plato and Kant, of Aristotle and how Eastern and Western philosophy related and how they differed.”

The last hike to Bandipur was a huge success. The data department was getting bolder and more adventurous. This time around there was immense pressure on coordinator Rajendra Subedi to organize the mother of all hikes – something that would create a history in D2. It was decided that Lamjung would be the place for this historic excursion. So, early Saturday morning at 7 am, a group of thirteen hikers gathered together, all pumped up and ready to go. Ice man Bimarsh Pokharel wanted to settle scores for having missed the last trip while Nikesh Shrestha was hyper enthusiastic about his first hike. Even as we left Kathmandu, we got the feeling that something grand and spectacular awaited us. The drive to Lamjung was fast and furious. Ram dai was in full flow as he cut through the sharp corners at breakneck speed. Nishikar Sapkota finally got some justice as his psychotic song collection was played during the drive, though not for long. Joke master Mahesh Raj Regmee kept everyone entertained while angry man Sumit Kumar Singh pretended to be asleep and unbothered.

We reached Besi Sahar at around 1 pm where we stopped for lunch. The hikers were all charged up and raring to move ahead. Rajendra Subedi led the troop like a true general. “Lets show them who we really are!” he exclaimed as he put on his famous “D2 Hawkeye” cap. Upon hearing this, the hikers were literally transformed into raging bulls. We set out for the audacious six hour walk to Ghalegaon, water bottles in hand and the intensity of a thousand blazing suns in our eyes.

“ By now our minds had overcome the physical fatigue. It was a true case of mind over matter. ”

The first leg of the journey was incredibly tiring. Many felt that they simply couldn’t do it. “At this rate we’ll never get there” they proclaimed. But we forged on, step by step, rock by rock with the spirit of brave warriors in our hearts. The spiral trail began to get steeper and stepper and soon we were all drenched in sweat. Fatigue kicked in and some of the hikers wondered whether they were going to get dehydrated. But we still marched on along the beaten track. There was simply no giving up. An hour passed and then another and we were so badly drained out that our minds had started to reach a different mental state. All of a sudden we began discussing philosophy, science and religion. We talked of Plato and Kant, of Aristotle and how Eastern and Western philosophy related and how they differed. We discussed the bleeding edge of science and technology, about the nature of sound and light waves and how we could make things invisible. We exchanged views on religion and the supernatural, on ghosts and psychology, on dreams and the very nature of human thought, on Murphy’s law, computers, electronics, magic, medicine, mysticism, logic, everything under the sun and even beyond it. We walked on and on, thirteen of us, miles away from the city, along the treacherous rocky path surrounded by magnificently green forest trees with the pleasant sound of the soothing breeze occasionally broken by intoxicating laughter or the soft whistle of a singing bird. It was like walking in a day dream – the dry fallen leaves against the green grass, the rhododendron laden hillside against the reddish glow of the setting sun and the crude rocky stairway that just kept winding on and on and on.

“ They told us that if we hadn’t arrived late they would have greeted us with garlands and flowers. ”

We reached Kapurgaon after sunset – at around 7 pm. It was a tiny village in the middle of nowhere. Some of the weary hikers wanted to call it a day and rest there. However, Rajendra Subedi forever a man of his word exclaimed with a true general like attitude “Brothers and Sisters, we can do it. We must get to Ghalegaon tonight at all cost!” Upon hearing this, the hikers were once again transformed into raging bulls. Neglecting all risks, we walked on, torch lights in hand and the sound of the general’s words ringing in our ears. It was dark. The clouds above us threatened to burst open at any moment. By now our minds had overcome the physical fatigue. It was a true case of mind over matter. So, we trudged on like zombies under the night sky. Finally, after two long hours we managed to reach our destination – Ghalegaon.

Upon seeing the tourist sign board the hikers let out a victorious scream “Yes! Yes! We did it!” they shouted and clapped together breaking the silent stillness of the night. The entire village was asleep when we got there. There was no electricity at Ghalegaon. It was a classic Nepali village. Rajendra Subedi, our experienced coordinator and commander in chief handled the situation coolly. He managed to find our ace man at Ghalegaon, Dhan Prasad who arranged for us two separate houses for the night. So we had to split. It was getting close to midnight. However, the people of Ghalegaon were still very affectionate and cordial. They greeted us with a warm and friendly attitude. We had literally woken them up in the middle of the night and asked them to cook dinner and yet they treated us with great respect. We were totally amazed by their hospitality. We ate together at midnight in a classic Nepali kitchen, sitting on the floor with the cooking fire burning in one corner. There were no lights. We talked to the women of the house and they informed us about the places that we could visit the next morning. They told us that if we hadn’t arrived late they would have greeted us with garlands and flowers. We were stunned at how loving and caring the people of Ghalegaon were.

“ It was like being in a different world and yet it was our own world and our own people. ”

The next morning we awoke amidst a picturesque surrounding. The beautiful village of Ghalegaon bathed in the pale morning sunlight. Scantily dressed little children ran here and there, smiling at us. Women washed clothes and began their daily chores while men attended to the livestock. The sweet taste of the cool hill water and the local tea served early in the morning made it even more refreshing. It was like being in a different world and yet it was our own world and our own people. After a breakfast of sel roti and aloo we walked around the village admiring the scenery and taking pictures. Every person we met there was kind and helpful and spoke to us with respect and honesty. Finally after a short walk to the tea garden we decided to leave Ghalegaon. We received the blessings of the elderly women who put tika on our foreheads and flowers on our ears and bid us farewell.

We reached Beshi Sahar at noon. Ram dai was waiting patiently there for us and we began the return to Kathmandu after lunch. Along the way coordinator Rajendra Subedi, a veteran of twenty five hikes, exclaimed that this was the best hike that he had ever been to. We reached Kathmandu at around 7 pm and unanimously declared the hike to be the most ultimate hike of all time.

32 thoughts on “Hiking from Besisahar to Ghale Gaun”