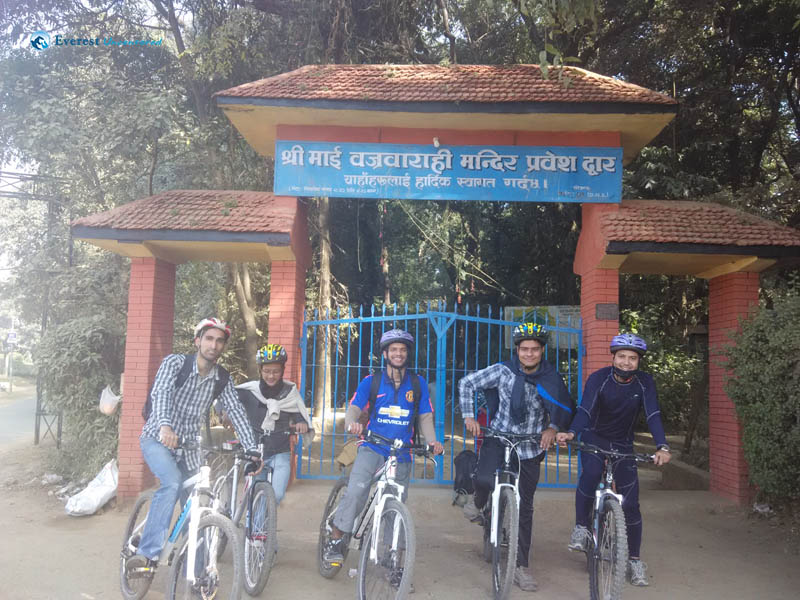 I was excited and scared at the same time; excited because I have always wanted to go cycling, and scared as I was not feeling well; but the excitement got the better of me.

It was decided that the cycling team would be meeting at Himalayan Java, Thamel. As I got off the bus at Ratna Park, I took quick paces on the way to rendezvous point. As, I got to know from Anil that he was near Nepal Guest House, I walked towards that direction. I could see few new members, different from the final list I was informed about.

And our cycling started at about 8:45 am though we had planned to start at 7:30 am. Well, typical Nepali time I must say for that. Everything about the cycling event was going differently than planned, even our destination. Originally, we decided to go to Shivapuri via Budhanilkantha, but we took a different route. We decided to go to Khokana.

At 9:20 am we stopped at Lagankhel for breakfast. We had our breakfast, took rest for a while and then continued cycling. We finally got to breathe some fresh air as we crossed ring road. Still, we had to overcome heavy traffic on our way till we reached Sunakothi. After that, we accelerated.

Since Bajrabarahi, the temple with no pinnacle was just two minutes away from our route, we decided to visit the temple, took some snapshots and returned to our main route.

We would have been much faster only if the cycle Bimal chose would not have created trouble for him. Despite all that, we kept on moving forward. From Chapagaun, we branched off the pitched road and took more adventurous route. It was the first time I had ever cycled on such adventurous route, and I felt it was better to let my excitement take over.

Cycling on narrow lanes was really exciting and also thrilling for me. Number of pits on the way made the journey more interesting. Also, we could have fallen down the hill if we were to get off the route. Our luck and our ability to cycle was good in that case. We took short rest at Charghara. Beautiful view down the hill helped us recover our strength faster. We were really hungry by that time and were looking for a place where we could refill our empty stomach.

On our way, we crossed a suspension bridge. Down the bridge, the earth and water running alongside was very low and it was really dangerous. Shortly, we reached Chhampee and after that, 30-35 mins of cycling led us to Windyhill Restaurant and Bar where we decided to take lunch. There we had chit-chat and shared our experiences, facing cool air which helped us get refreshed. We had our delicious lunch and gave some time for the intake to reach belly. The cool breeze made us wear our jackets which we previously had put off.

At about 2:30 pm, after recovering the strength, we decided to continue our journey. We asked for our leave from the restaurant after paying the bill and then we headed towards our destination Thamel. Again, we had to overcome heavy traffic on our way back. We reached our destination, the shop from where we had hired our bike at about 3pm. So, our 1 day cycling ended there.

It was fun filled day with brothers and I would like to thank Anil Kumar Shrestha for organizing the event and also Sujesh Shakya and Kishor Raj Adhikari for leading the way.

83 thoughts on “Bicycling for Recreation”