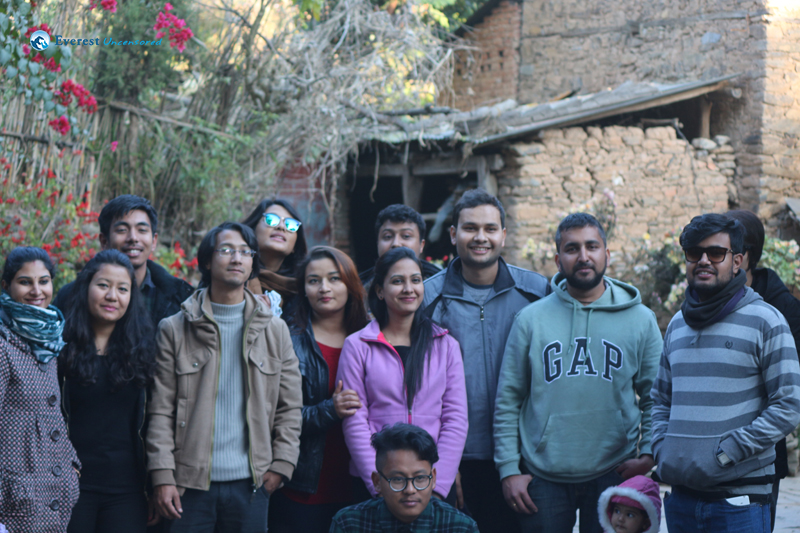 Hari Prasad Raya
December 17, 2016 marked yet another intriguing outing from Deerwalk. This time it was the beautiful Bandipur in Tanahun. We had been wanting to go someplace amazing for a long time and debated on many places. We finally settled for Bandipur, and boy were we thankful for that. Spoiler alert! There were no regrets for our choice. The place is a powerhouse of cultural architecture and is quietly settled a top a hill, which gave an opportune hiking outing too.

Our group bus left the Deerwalk premise at 9AM and headed to Kalanki picking up other friends on the way. It was a long 5 – 6 hour drive to reach our destination. We made the most of the time by singing, laughing, managing to sort of dance in the cooped up bus and basically being loud all the way. At about 11:30AM, we stopped at Malekhu and had lunch. The weather was favorable and the food was delicious. We couldn’t ask for more. After resting for a while, we resumed our journey continuing to be boisterous through out the way.

The majestic view of the Himalayas from our resort was spell bounding.

We truly forgot the long drive it took us and got lost in the view. But it was getting late and we went inside to sort out our rooms and luggage. Then we rested for some time and went on a relaxing evening walk through the local market. The market is exciting with colorful shops. We all had tea, samosas and jerri. Bandipur bazaar has hands down, the best jerries your tongue buds have ever tasted. Not only me the whole team agreed and recommends it.

After a good walk and scrumptious jerries, we returned to our hotel resort where we played our trademark team building games. After a few rounds of games, we made a bonfire barbeque and had a great time. Some Korean tourists who were staying at the same resort joined us in singing and dancing. Even with language and cultural differences, we all enjoyed together. Later we had our dinner and went to sleep.

The next morning is a day I’ll never forget. I was greeted with the most inexplicable view on waking up. We were literally above the clouds and the view was stunning from our resort. All of us were enveloped by the exquisite beauty of Bandipur. Some of us clicked some pictures to take the memories back home in our cameras and phones. At about 8AM we had our breakfast and bid goodbye to our hotel. But we weren’t ready to say goodbye to the trip yet.

From our hotel, we headed towards Siddha Gufa, the largest cave in Nepal etched inside of a hill. The hike from the highway to the cave took us about an hour. The cave itself was enormous and pitch black. We had a helpful guide light our way through the cave. The darkness, the dangerous slippery path, old-ancient feeling, cavernous turns ,adventurous. We spent a good half an hour exploring the cave. After coming out of the cave, we hiked another hour back to the highway.
We left the place at about 12:30PM and arrived at Muglin at about 1:30PM. There we had lunch. We left Muglin at about 2PM and returned home.

The ride back was comparatively quiet as we were all tired and a part of us was wistful about tearing away from Bandipur. Carrying all the wonderful memories, we silently returned back to Kathmandu, reaching the valley at about 5:30PM.

The outing was a great experience for me and I’m sure for the entire team. I’d like to take this opportunity to thank Deerwalk and all the coordinators who planned such a delightful journey. It is said that wherever you go becomes a part of you. Bandipur has genuinely become a part of me too. Thank you Bandipur.

Johnson Thapa
Our much awaited trip to bandipur started in Deerwalk complex where the team gathered and boarded Deerwalk van for the trip. Everybody seemed very excited. I actually had to meet the team on the way since I was on the bike . Since the team headed a bit earlier , I had to drive alone till Naubisey where I was able to tail the van to Malekhu. The view from inside my helmet suggested the team was having loads of fun inside the van. I could hear the team singing and laughing all the way to Malekhu where we planned to have lunch. When we finally came to stop, our manager Suraj Dai has already reached there and had managed the lunch for us. That was the actual time where I got to greet the team. The lunch was delicious. After a full tummy, the team went further towards the destination. We now had a van, a car and a bike heading for Bandipur. I, personally enjoyed the ride driving along with Suraj Dai and the driver dai. They were both spectacular drivers. After couple of hours we were finally where we meant to be, The beautiful Hotel Bandipur Resort. We parked and the first thing that got our eye was the view from Bandipur. You could see the Great Himalayan range and the valley that as not only mesmerizing but a breeze to our tired brains. Some of the team members went to room to freshen up where some of the team members stayed for the view. After an hour or so, we all decided to went to the famous Bandipur bazaar. It was just half an hour walk to the bazaar where we snapped a lot of photos and rested at a restaurant where we had some tea and light snacks. After that. we went back to Hotel where Mayank was preparing for the team game. Though the sun had went far into the horizon, the game went very exciting. After the game, we all sat down for the barbecue. The whole tundhikhel of Bandipur was our playground where we had music , fire and a small drink / dance session that let us forget all the tiredness from the travel. In the middle of the session, a small photographer group of Korean people joined us. They actually seemed to enjoy the way we were having fun . I guessed cause they were taking loads of our photographs. The team then enjoyed the delicious dinner and then went to the rooms.

The next morning we all gathered and had a breakfast. Everyone seemed to be in hurry for the trip to Siddha Cave which we didn’t manage to go the previous day. We checked out after the breakfast and then boarded for our next destination. The way down the hill was chilly, especially for me since I was on two wheeler. I tailed four wheelers to the parking from where we had to make a small hike to the entrance of the cave. Though everybody was a bit tired from the previous day, we all actually managed to get to the entrance of Siddha Cave in record time. The walk heat us all up. After a short rest, we then went inside the cave. It was mesmerizingly beautiful. One could feel a big auditorium like structure inside the cave which was massively enormous. Nitesh and I decided to went ahead of everyone inside the cave where we merely get out of the situation. Our camera flash died in the middle of the stairs that we had to take to go further. The dark silence did made us a bit nervous but the team managed to get to us in time. After the exploration, we then made all the way to parking lot and then headed towards our next stop at Malekhu. We stopped at one of the Thakali restaurant where we all had the delicious meal. After the meal, I went inside the van to take a short nap whereas Nitesh was driving my bike. After hour and so, Nitesh and I changed the ride and then started heading toward home again.