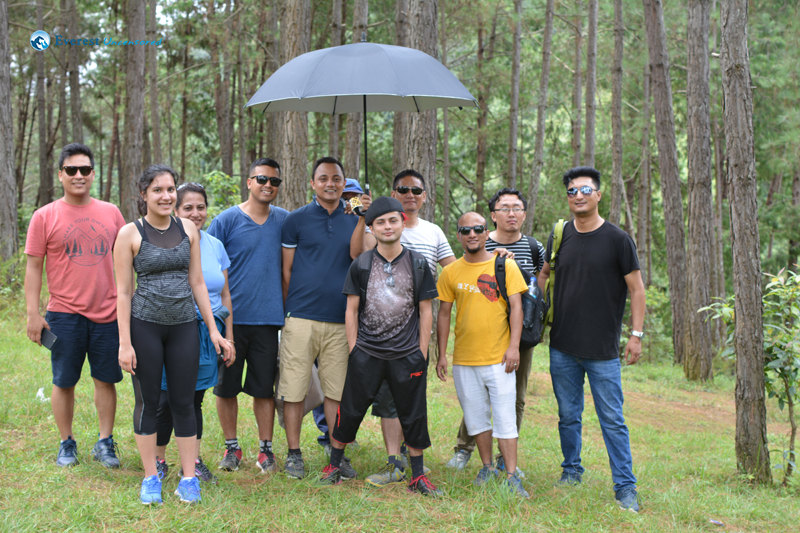 It had been a while since my last day out in the sun, and interestingly, it had been longer since I last went out for an all-day hike. Although I was not too keen about stepping out of my comfort zone, the whole experience at the end of it, I must say – was more than just enthralling. To be honest, I’m not sure I got enough sleep the day earlier, knowing that I had a long day ahead of me. It was six in the morning and I was already tired. At half past 7, I stepped into the van knowing full well that I was going to be toasted by the time I got back home. It was raining and suddenly the thought of walking in the rain didn’t seem that exciting at all. Along the way, we stopped briefly for breakfast and it was unlike anything I’ve ever witnessed. We were served “Sel” which looked like massive flat doughnuts, probably very delicious I’m sure, “Swari” very similar to crêpes with fillings called “Haluwa” – made from flour, butter, and sugar (Google to know more), Samosa (deep fried vegetable dumplings), and some curry soup. Half an hour later, we were on the spot where we started our hike, but not before passing through the long bumpy muddy road, if we can even call it one. The first checkpoint was a reservoir of some kind which smelt fishy – literally. Then we traversed a suspension bridge. I thought I had overcome my fear of heights and I have but then and there, vertigo hit me. I felt this sudden rush in my head and my heart started beating faster. The feeling, however, disappeared quickly after being waved by few kids more than half my age, unafraid, running and shouting, excited by something I can barely imagine. I can’t exactly remember for how long we walked until we took a quick break to quench our thirst, which would eventually drive us the entire way to the top of the hill.

I thought I had overcome my fear of heights and I have but then and there, vertigo hit me.

After a short conversation about leeches and runaways, we were back again on the road. Down and up we went, again and again, cursing and shouting (at myself of course) about climbing this small hill which felt like an expedition to one of the tallest mountains, short of breath and breathtaking at the same time. We stopped again to rest and energize ourselves under the vaporizing sun, laughed and talked, and were on our final stretch to the top. Before we even reached our destination, I was already consumed. However, something very interesting happened. Although all the bones and muscles in my body ached, I felt rejuvenated (which sadly only lasted for a few hours). What did we do at the top, you ask? We all played dumb charades for a while, then had our lunch, talked about all kinds of things which we would hopefully remember. Frankly, I really wanted to stay there for a bit more because it was one of those long-awaited breaks one needs once in a while, and more so because I very much enjoyed the company of few of the most wonderful people I know. A pint and a dime, and a time sublime, then a stumble and a fall, the fun of it all, before I knew it, we were already headed homeward. And then there were the quick sprints, followed by occasional bursts of laughter, and we were in the back seat of the van on our way to Kathmandu. Like they say, “Returning home is the most difficult part after a long day hike; You have grown outside the puzzle and your piece no longer fits.”

One thought on “Balthali Hike”