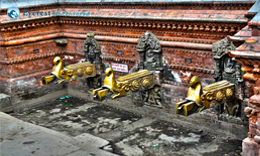 Before not so distant past (2008 AD), more than 200 households were using water from Sundhara but due to unmanaged and haphazard urbanization of core areas of the city, many water spouts have dried up – Sundhara being one of them. It is a common sight to see derelict spouts at places where clear, potable water once flowed freely.

Ancient water spouts are essential part of our national heritage as they are adorned with intricate craftsmanship of a bygone era. We have to spread awareness among people to conserve such masterpieces.