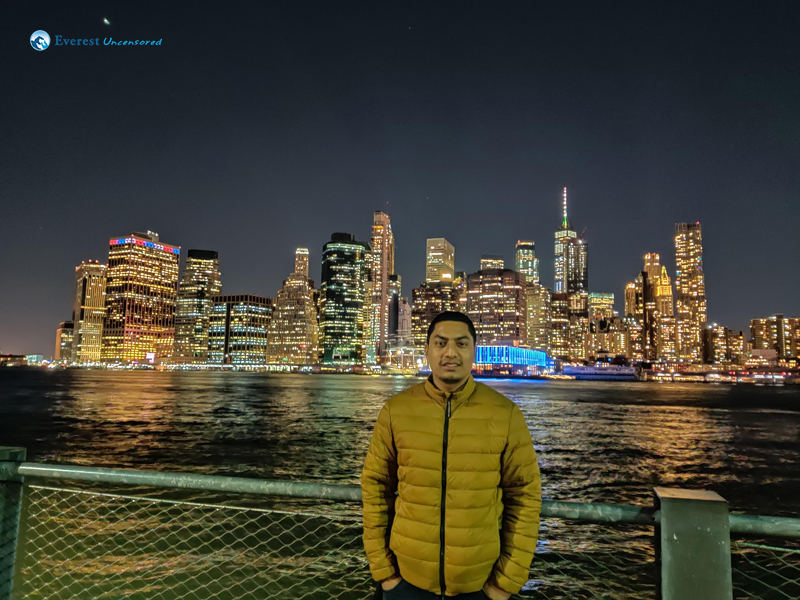 Oscar Wilde once wrote, “Live with no excuses and travel with no regrets.” Even though it was midnight of February 28, my eyes were still wide open. I was thrilled about my first international flight to the United States the next day. On the day of the flight, I along with two of my travel buddies, Santosh and Saurav, bid farewell to our families and the loved ones. We then headed to Tribhuvan International Airport (TIA).

Unfortunately, our flight got delayed by two hours because of a red alert in Korea. With mixed feelings and heavy hearts, we departed from TIA to the 5-hour flight to Hamad International Airport, Doha. We had a 4-hour transit in Doha. So, we used our time visiting most of the terminals and shops. After having a refreshing coffee there, we had a 14-hour-long flight to reach New York. There we had four hours of boring transit and one extra hour flight to Boston.

With all the hustle and bustle, we reached our hotel rooms at 1 a.m. and took a quick nap to reenergize our exhausted bodies. The next day, we freshened up, had our breakfast, and prepared ourselves for the first day at the Boston office. Abanish Dai picked us from our hotel and took us to the office. He also gave a tour of the workspace. While we were checking out our missing emails and Deermines, everyone arrived at the office and warmly welcomed us.

It was overwhelming to get to know people who we only knew via their names in emails and Deermine tickets. In the standup meeting, I introduced myself to everyone. I was also excited to know all the teams in the US, working on-site and off-site. Compared to the Nepal office, the working environment was much peaceful as everyone was busy with their own tasks.

Besides the regular tasks, I could discuss a lot of ongoing issues around different teams and provide a valuable solution. Apart from this, I also attended a few client-calls with Sagar Dai and Ashay Dai. They were much helpful to me as well as for my new role as I got to learn through the perspective of clients. In the second week, I was delighted to meet Jeff Gasser, Jeff Rick, Julie, Jennifer, Tim Huke, and a few of the recent members at the Boston office.

Interestingly, we had to cook lunch by ourselves, and we used to go shopping at Wegman’s supermarket. Since we three boys were not that talented cooks, we were glad to receive dinner invitations from Suresh Dai, Sagar Dai, Awanish Dai, Manish Dai, Sangita Didi, and Sanjeev Dai. Tim Huke invited us to the Italian restaurant “The Tucson family.” We also had a wonderful lunch at Mc Donald’s and Buffalo Wings restaurant. Despite having lots of delicious cuisines, Nepali dal bhat still tastes better than everything else in the world.

On Tuesday, the first week of our visit, Dave handed us two tickets of Boston Celtics vs. Brooklyn Nets at TD Garden. The game was interesting. For the four quarters, the Celtics were leading the match, but because of the extra time, the Nets scored a draw. In the extra time, the Nets scored more and grabbed a winning point. Santosh and I went to New York to spend our first weekend. We reached New York by Megabus in the morning, and we walked from 21st Street to 83rd Street to leave our bags at Santosh’s apartment so we could roam around New York City.

Luckily, we also went to the Empire State Building. After that, we went on a ferry ride around the “Statue of Liberty”. We crossed the Brooklyn Bridge toward the Brooklyn side on foot and took a rest at the Dumbo Park to view the lighting night view of Manhattan. We were grateful to observe the empty Times Square in the early morning and busy Times Square in the evening.

The following day, we went to Central Park, where we visited a few castles, parks, and lakes. Mostly, people in New York turned out to be pet lovers, so we came across the breed of many dogs like Husky, Yorkshire Terrier, and Great Danes. On the second weekend, Santosh and I again went to Dallas to meet our relatives. Texas was gloomier as well as hotter than Boston; the weather was not favorable for us. During the weekend, the weather was cloudy, and it was raining periodically. However, I could visit both Dallas and Las Colinas downtowns. I also met a few of the former Deerwalkers in Texas.

Though we had to return to Nepal 10 days earlier due to the lockdown, our trip was full of excitement, thrill, fruitfulness, and happiness. We departed from Boston on the 3rd week and reached Nepal in time. Fortunately, we reached Nepal on 20th March, and we had to self-quarantine for 14 days to be safe and to keep others safe too. We felt happy to not get any symptoms of the coronavirus during the quarantine. Recently, I also got tested for the Rapid Diagnosis test (RDT), and thankfully, the result was negative. I am very grateful to Deerwalk for providing me this wonderful opportunity. Last but not the least, STAY SAFE, EVERYONE! GO CORONA, CORONA GO!