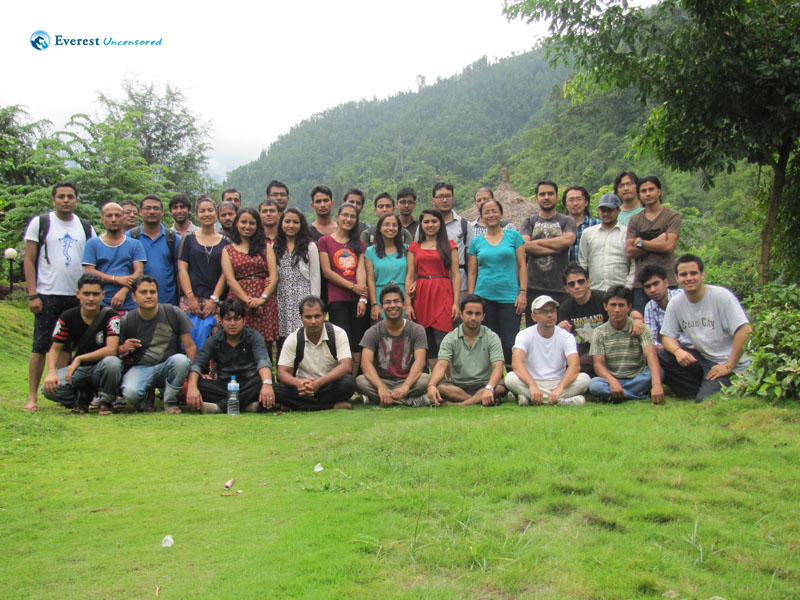 Dheeraj Pandey
We started from the office, Sifal, before heading towards River Fun resort, Dhading at 12:00 am from Kalanki. I was with almost 36 members within the outing team.

It was a mind blowing beginning of our outing with dancing and singing inside the bus on the awesome route and climate, full of greenery and free flowing Trishuli next to us down the road.

It was a mind blowing beginning of our outing with dancing and singing inside the bus on the awesome route and climate, full of greenery and free flowing Trishuli next to us down the road.

We stepped down at riverside Kurintar opposite the resort, after continuous travel for 4 hours. We reached the destination resort at almost 5:00 pm. At the resort, I enjoyed swimming and few were busy visiting the periphery. It was a wonderful moment to have fun with the entire team while playing team building games.

We started with light snacks and drinks there and continued with barbeque and dinner later. All moved towards their tents to sleep after all these activities accompanied with fun. I woke up early and visited the nearby sceneries and took breakfast soon after.

It was a great outing with my wonderful team and the amazing location. Thanks to the organizing team and thanks to Rabin dai and Umesh dai for driving us safely for the trip.

Lalmani Regmi
The overcast sky was staring at us as we set out on our journey from the office premises half an hour prior to 12 noon. We went past the relatively less crowded metropolitan roads- thanks to Saturday, highly traffic congestion susceptible Kalanki-Nagdhunga section and downhill along the serpentine curls of Prithvi Highway.

At once the rejuvenating gusts of fresh air could be felt. The cool breeze was blowing, patches of silvery white clouds were marching across the sky and occasional streaks of sunlight piercing the veil of clouds lit up the peaks of hills.

At once the rejuvenating gusts of fresh air could be felt. The cool breeze was blowing, patches of silvery white clouds were marching across the sky and occasional streaks of sunlight piercing the veil of clouds lit up the peaks of hills. We drove by as the raging Trishuli growled beneath us. Finally, after about a three hours drive, we arrived at the end of our road and stopped by to cross the suspension bridge over Trishuli to reach the other side where our resort waited to greet us in all its courteousness. With welcome drinks served, some of us plunged into the blue-green swimming pool that overlooked into the muddy waters of Trishuli. The place was nicely set with tents tethered to the sandy ground under the cooler cloudy sky at the base of the hill and side of the river. The merry time began as vodka and beer gained access to our body and played their part to knock some down. Card games, guitar strumming, swimming, drunk-chatting, and long sessions of photo shooting (especially for the girls) made the night worthwhile and, not to forget, that team building game in particular was entertaining and effective enough to embolden the friendly ties amongst us. And with dinner served, some enjoyed the tranquility of the night by staying awake, while others- the bliss of sleep.

New day dawned, weather not much different than the day before, as Trishuli flowed incessantly in its own glory; sent its ripples to the shore and having caressed our feet drew them back. That picturesque morning adorned further by the longitudinal layer of white mist over the river, undisturbed like the jet trail, caught our attention for a while. Breakfast was served, bills were cleared and we rerouted to our respective vehicles. As we returned, there were moments of interruption on the highway but travelling back was fun. As we ascended uphill from Naubise, the nature revealed before us her majesty. It drizzled as the temperature went down and the mist completely obscured the road. The speedy sharp turns taken by the bus under the circumstances of poor visibility and vehicles from the opposite direction coming into our sight out of nowhere, as if the head on collision was in the cards, had everybody’s hearts in their mouth. The oohs and aahs kept the adrenaline gushing into our blood. The thrill was short lived and we entered into the capital city, in all its chaos and rawness, as all the memories of the outing flooded back and swept me away into the oblivion.

Narayan Subedi
IT people are known to be boring, sitting in front of the computer for hours and hours and getting lost in the universe of codes. Well, joining a good company where you don’t only work but also live every bit of your life has always been my biggest dream. I never imagined my dream would come true so soon when I joined Deerwalk.

It has been 8 months since I have joined Deerwalk and this was my first outing. I was already excited two weeks before our outing, when the planning and discussions for it started. Finally, the day arrived for our outing. It was 12:45 pm, when the office van picked me up at the Thankot Checkpost, from where I joined the team and the real fun started. Due to some traffic jams and poor road conditions, we were delayed to reach to our destination. It was 4pm when we finally reached at our destination, River Fun Beach Resort (RFBR).

The resort welcomed us with a courtesy.

Since it was very humid and everyone of wanted to chill down little bit, most of us jumped into the pool before we headed towards our camps.

Since it was very humid and everyone of wanted to chill down little bit, most of us jumped into the pool before we headed towards our camps. After relaxing for a while at the pool and some snacks, we participated in ‘Chain the Bottle’, a team building game, which was organized by Bishal Vaidya and Apshana Lamsal. There were three teams consisting of 7 players in each. After the fun filled games, it was now time for some mouth watering BBQ and some chilled beers. Every one of them was enjoying the outing by playing cards, singing, dancing and hanging around. I went to bed quite early as I was exhausted, while some stayed till 2 am in the morning. At night it was neither too cold nor too hot, which was perfect environment for me to have a good night sleep.

The next morning, it was finally the time for us to bid goodbye to RFBR. Some of my friends still had time to swim just before the breakfast. After the breakfast and our group pictures, we headed towards the parking lot where our office vehicle was waiting for us. Our vehicle routed back to our home at 10am. On our way back, we stopped at Naubise to have some ‘Masu Chiura’, which was really delicious. The weather was chilly and foggy. We faced traffic jam near ‘Tile Ghar’, which was not a new thing for us. I got down at the Thankot Checkpost around 3pm, and headed back home.

Apart from the busy schedule in my daily life, travelling 2 hrs back and forth just to work had left me no time to do anything for myself. But this outing has really refreshed me and boosted my enthusiasm. It gave me an opportunity to get along and know my fellow co-workers and seniors better.

Thank you Deerwalk and all the coordinators for organizing such an amazing trip.