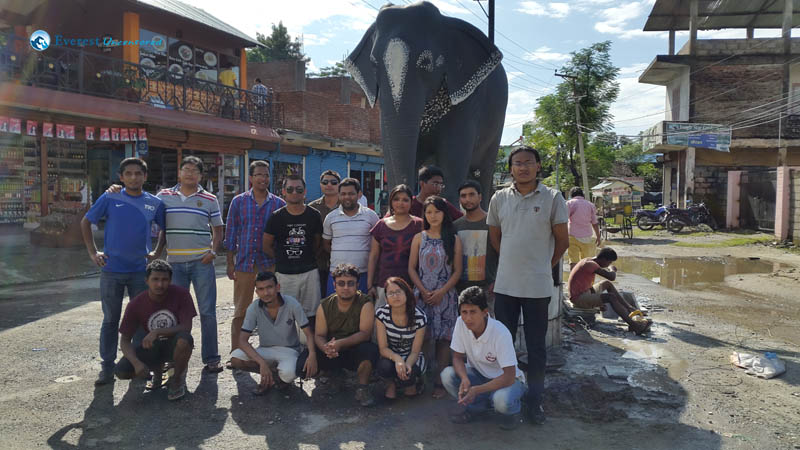 Ranju Khadgi
My first outing with the team members was on 20th September which got me so excited that I reached the office before time. As we were going towards the Terai region we all were worried about the hot climate, but the weather support us and it started raining gently. The route leading to Chitwan was filled with natural wealth; green slopes and trees, free flowing Trishuli next to us down the road, and some waterfalls. The resort where we stayed at was so peaceful and everything was managed very beautifully. After getting refreshed we went to have some snacks at the restaurant of the resort. After having our photos clicked we celebrated Ujwal dais’ birthday and played some of the team building games which were awesome. Then we had our most awaited BBQ. All were singing and having drinks. Then the real fun begun after playing Antakshiri, Ganesh Dai was in our team. His voice is awesome and he can sing almost any song. The junior Subash (Subash Kunwar) song “Hatti ma mero yo choto bhoto”, that was so hilarious. The day ended with fun and joy.

The following morning some were busy with swimming and some went for elephant riding.

This outing has really refreshed me and boosted my enthusiasm. It gave me an opportunity to get along with my team members and seniors.

After having some light breakfast we did some chitchat and clicked some photos. After having launch we took our suitcases and left the resort and headed towards the boating site. After waiting for one hour we got to boat and we saw many crocodiles and snakes. We clicked some Group Pictures and said goodbye to Chitwan. We stopped to have some delicious Fish at Malekhu.This outing has really refreshed me and boosted my enthusiasm. It gave me an opportunity to get along with my team members and seniors. Thanks to Deerwalk for organizing such an amazing trip.

Subash Kunwar
20th September 2014, the day was Saturday. I was with almost seventeen members. We started to gather in office at 9:30. Some of us were on the way who were waiting for us. Our destination place was “Bagmara Wildlife Resort” located at Chitwan National Park, Bagmara-Sauraha, Chitwan. Its reservation office is also located at Jyatha Thamel. There are two routes to reach there; 1. Kathmandu-Bhimfedi-Hetuda-Chitwan-Sauraha(Nearly 155 km); 2. Kathmandu-Kalanki-Thankot-Naubeshi-Malekhu-Muglin- Narayangarh -Sauraha(Nearyly 170 km). we followed the second route. We left our office at nearly 10:30 on our office bus. Then picked up some members from Kalanki. We had some shopping, from Bahtebhate Super Store (Kalanki). Then we left kalanki at nearly 11:30 AM and headed towards Chitwan. The weather was partially cloudy. We reached Naubeshe at 12:20 PM. We had some snacks including tea and left Naubeshe at 1:00 PM. By having fun, eating chips, and singing on our way we reached Muglin at 2:00 PM. We had launch at Muglin. Some of us had Nepali khana and some of had snacks. The we left muglin at 2:30 PM and took left turn towards Narayangarh. The right turn was for Pokhara. Then continuously we headed towards Narayangarh. The natural view, Trishuli River, was also traveling with us on same direction. High and high hills, Narrow roads, continuously coming going vehicles and some rough roads continued. The more we went forward the more the hills disappeared because we were heading towards Terai region. Terai started with green and dark forest. Very straight roads and very hot represents Terai. Following the Tribhuwan highway.

We Reached Narayangarh at nearly at 4:45 PM. Sauraha was a new place for me. Not only sauraha, but Terai is also a new to me so I was the most excited to see the lifestyle over there. We stopped in Narayangarh for 20 minutes.On that interval I walked through the streets, observing vehicles and peoples over there. Then we left Narayangarh. After the journey of one an half hour finally we reached our resort at 6:20 PM. Then we freshen up and came up for snacks. The garden of the resort was very natural and refreshing. Then we started to play team building games and had lots of fun there. Afterwards the time was for gathering, drinking, and enjoying. With the BBQ we sat in a circle and had drinks. We divided ourselves in two groups and started to play “Antakchree”, it is the most fun thing to do while outing. It continued till 12:30 AM of next day. I went to bed at 12:30. Some of us were still enjoying, talking, and cracking jokes.

Then on the second day, 21 September, our 8 members including me went for jungle safari in Chitwan National Park for a elephant ride. Some of us are still sleeping, and some of were being ready for swimming in the pool. That elephant ride was going to be my first elephant ride, as well as my first trip to Saruraha. We left resort at 6:30 AM and had tea on the way. After traveling 5 kilometers, we reached to the place. We started elephant riding from nearly at 8:30 for 45 minutes. We 8 members are on two elephants, four on each.

Chitwan National Park is the first national park of Nepal. It was reputed as a World Heritage Site.

Chitwan National Park is the first national park of Nepal. It was reputed as a World Heritage Site. It has an area of 932 km². It has preserved tiger, Rhinos and many kinds of birds. During the ride. We saw deer, Chital, different kinds of birds, and rhino. The surrounding was green and silent. It seemed like heaven. Then we returned to our resort nearly at 10:00 AM, it was time for breakfast. Others had their breakfast already and were having fun in the swimming pool. I also joined them. We missed our schedule for boating so we postponed it at 2:00 pm. We had our launch at 11:30 and waited for boating. Boating was another fun and thrilling experience. We saw crocodiles, black snake, kingfisher and lots of other birds during boating. Our bus was waiting at the end point of the boating location. We enjoyed a lot there. And left Sauraha with promise to come next time. At 3:00 pm we headed toward Kathmandu via same route. The bus was silent, all of us were tired and sleepy. After having snacks at Malekhu we started to sing and have fun by cracking jokes. Like this we reached Kalanki at 8:30 PM. Then I reached to my place at Kapan at 9:30 PM with the lots of memory.