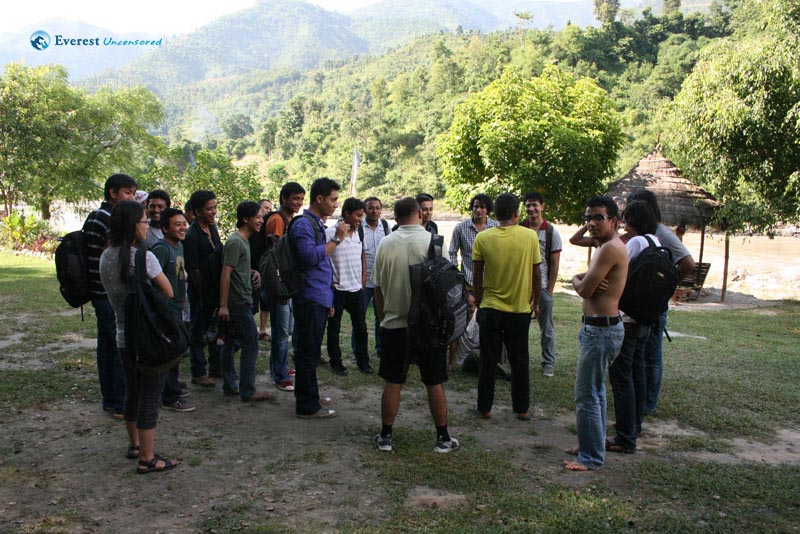 Anewz Maharjan
It has been almost 2 months since I joined Deerwalk. Hence, it was my first outing and I was very excited. We left for our destination (Royal Beach Camp) at 10:30pm. On the way, we stopped for a while at Tribhuwan Park and got ourselves refreshed. It was a humid day but nonetheless the amazing atmosphere in the bus, with people singing, made it worthwhile. Most of us only have had some light breakfast in the morning, so we made a break at the popular highway destination, Malekhu.Spending joyous moments and bonding with fellow team mates, everyone finished their lunch. Finally, we reached our much awaited destination at around 3:30pm.

After reaching RBC we were concisely described about the protocols and timings for meals at RBC.

RBC is located at the Beach of Narayani River featuring cottages for accommodation, camping area, beach volleyball court and swimming pool. The location is in a very peaceful environment and we could hear water flowing and thumping the rocks in the river nearby. After the snacks, we were divided into teams consisting of 6 people to play volleyball tournament, too bad we lost in the semifinals. Swimming pool was open the whole day till 11pm and most of us were at the pool relishing the warm water. Time passed hastily and the sun set, it was time for dinner.

As the night fell upon us, everyone was adoring the moonlight by singing, playing guitar with card games alongside the campfire and barbecue. It was a joyous but wearisome day, and we were to camp the night. Camping is not about feeling cozy, it’s about being one with the nature. Although the camp felt a bit hot, we slept quite well.

At dawn, the weather was clear, calm but very warm. We took our morning tea and then, breakfast. We were to leave RBC at around 1pm so in the meantime, the fun started again. We started playing pool volleyball. I thoroughly enjoyed my first outing, got introduced to my fellow coworkers, all in all it was a great experience.

Samrat Shakya
My first outing at Deerwalk, which got me so excited that I woke up earlier than I had to in the morning. With all of my stuffs packed I reached Kalanki, where I was picked up by my fellow team mates, and there started a wild ride to RBC. The weather was sunny, and traveling a long road in a hot day, that too on a bus, was seriously a challenging job, but the people around made the environment quite a chill. We sang, shouted in joy all the way along the bus ride which made us hungry.

We stopped at Malekhu to eat the famous local fish and some snacks.

>We stopped at Malekhu to eat the famous local fish and some snacks. After 45 minutes we started our journey back and headed towards the destination. At 3:30, we finally reached the destination. RBC resides on the bank of Narayani River. The weather was still hot, some seniors directly jumped into the swimming pool with their clothes on while we were exploring the location.

After some time, the snacks were placed and we all headed towards the dining hall. After that we were called for the team building games and were divided into 6 teams to play beach volley ball. My team which was Team D, and we reached the finals but lost to Team B. Then we all changed our clothes and went swimming. Later that night after dinner we gathered at the banks of Narayani River for camp-fire and barbecue. We sang, danced and played cards till late night and went to our tent for a good-night sleep.

Next day, early at 7 am, while others were already awake and had their tea I was still inside my tent. The morning view of the surrounding was mesmerizing. After we all had our breakfast we packed our bags to get back home. We got some moments to have fun with the surrounding of RBC since our vehicles were late. At around 1 pm we all boarded the bus and got back home.
It was a memorable and enjoyable outing for me. I got to know more about my fellow co-workers and seniors and I am looking forward to the next outing.