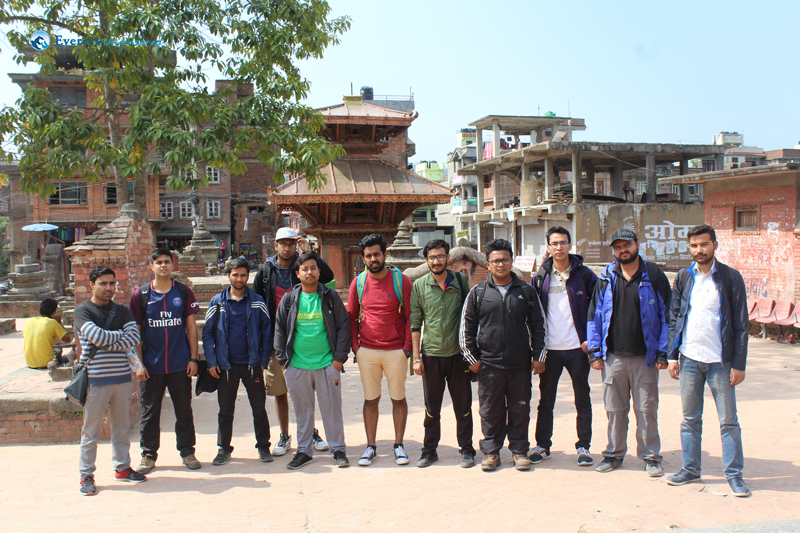 After much anticipation, Squad D finally set out on a two-day hike to Lapsephedi. Squad members were very excited as it had been almost six months since our last two-day hike. Initially, we were unsure about our destination because we wanted to make sure we picked the best hike trail, but after brainstorming, we settled on Lapsephedi

The first day started at Deerwalk Premises. A few of us gathered here at around 8 morning and began the first leg of the trip, ‘Drive to Sankhu’. The rest of the hikers were picked up enroute to Sankhu. We reached there at about 9:30 am. After a light breakfast, we started our walk towards Bajrayogini. The initial uphill route was steep and we met many people along the way who had come to visit the temple. The hike continued on to ManiChur. In order to get there, we had to walk through Shivapuri National Park. We encountered a small pond in ManiChur with an interesting story. It is said that once a year, there is a festival where many devotees come to take a dip in the water. After a short break in Manichur, we began the last phase of our journey for the day: hike from Manichur to Lapsephedi. This part of the hike was relatively easy as it was mostly downhill and a moderately straight path. We had light snacks along the way. At around 5 in the evening, we reached Snow View Mountain Resort. The night was relaxing and filled with jokes, laughter and dancing.

After breakfast, we started walking towards Nagarkot. In comparison to the previous day, the route was much easier as it was simply straight paths. We reached Nagarkot around noon where we stopped for lunch. Deepak Dai then came to pick us up at Nagarkot, after which we headed back to the city.

One thought on “2 days Hiking from Sankhu to Nagarkot”