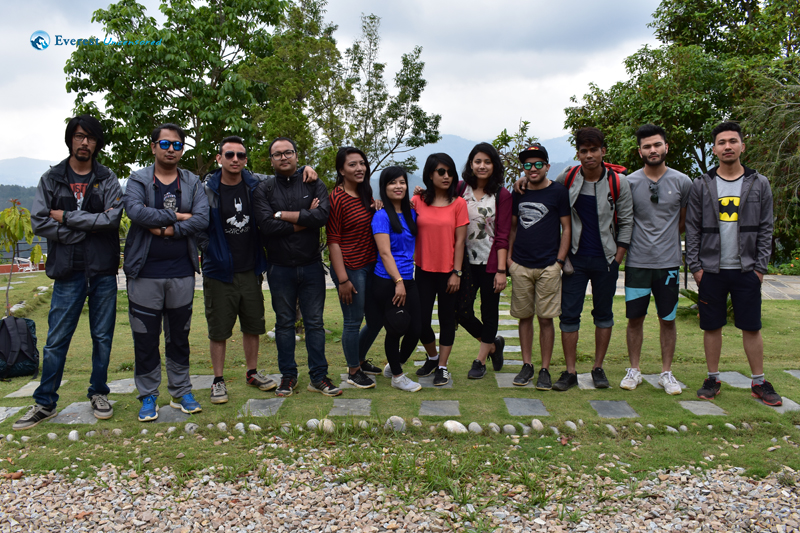 I had plenty of doubts on my mind about going on this hike (not just this hike, but any hike in general) because I am not a “Yaaay!! let’s walk” kinda person. I can barely walk for about 15 mins(I believe i have stamina as similar to that of an old people), let alone go for a hike, that too a 2 day. But how could I say no when the co-ordinator was my mentor herself and when I had heard such cool stories from my teammates about how you get to know each other better(or worse, I was yet to know). So I decided to take the risk and went for it.

I wasn’t really sure what to expect as it was my first Deerwalk hike(first hike EVER). It started early on Saturday morning with chill teasing session on our way to Panauti. From there our actual hike began. It would have been a totally different story if it wasn’t for the scorching sun and polluted roads. We had to cover our whole faces while walking. But the company I had made all those things little easy to bear. We started taking random pictures here and there(some candids, many more plandids :-P). By the time we reached Khopasi, we were so tired that we had to take some energy boosters(meaning local sekuwa and cold drinks) for our remaining journey. When we reached our first suspension bridge, everybody was excited. We took our “mandatory” group picture on that one(and ignored all the rest of the bridges that came on our way). Had it not been for singing random songs, passing sarcastic comments on each other and listening to the witty banters, it would have been really very difficult to walk on those roads, in the rain, almost falling on the ground due to the slippery mud. After long hours of walking and running and laughing and almost falling, we finally reached our hotel Balthali Mountain resort. The mountain view of the valley, the greenery, the peaceful environment, the fresh air and not to forget cozy and clean rooms made me feel that the tiring walk, the sweats, messy, dusty and muddy roads were all worth it. After getting some rest, we planned dry picnic on the garden of the hotel but on the midway, it started raining again so we had to move our (not so dry anymore) picnic to the tent. Then we had to move the picnic from tent to one of the rooms as the tent started getting wet as well. By the time it was 7, we were all set for barbecue. We ate, we danced, had our dinner and headed to our rooms where we played a game called Murderer,by blaming each other for killing them. All of us were tired so we decided to get some sleep. But knowing the company I had, I knew they wouldn’t sleep without pulling off some stupid prank. So by midnight we were playing “friendly neighborhood ghost”, trying to see who can scare whom. And finally we slept.

I can barely walk for about 15 mins (I believe I have stamina as similar to that of an old people), let alone go for a hike, that too a 2 day.

And the very next morning we woke up, got fresh, had some delicious breakfast (which was on the table after waiting forever) and headed to road for early start. Our next destination was Namobuddha. At the beginning it was all fun. We started playing “Never had I ever”, got to know some secrets about some of them. But after crossing the first suspension bridge of that the day, the road was up hill. In addition to that, the roads were slippery with blood sucking leeches waiting to stick on someone to feed(that was the creepiest). At some point, it almost got inside my shoes(thanks Sumit dai for taking if off). It was more difficult on second day but somehow we managed to reach Namobuddha after so much of struggle. What a relief it was to see office van waiting for us. With a light breakfast and a long journey, we were so hungry on the way back so we went for a good Thakali meal in one of the restaurant which is now Ganesh dai’s favorite place, isn’t it Ganesh dai? (Wink)

At the end of the day, I came back with beautiful memories and some scars(literally,on my left hand) and with a change in thought about hikes. It’s not that now I suddenly love going on hikes but I have realized, good company makes everything better.

Getting happy for a weekend is too main stream, getting excited for hike on a weekend, now that I call “boooyeaaahhhh”. For me it’s not an everyday meal to go on a hike. Knowing that I can’t walk for much extended time, the tiredness during the walk, new roads, unknown location and a not so precise google map, but the joy and excitement of hike, overwhelmed all the fears.

More than how we started, where we went and how journey ended, I want to express how fun it is to go on journey, be even a short one, even If the place and the roads may not be so exciting, when we go with friends it will always be exciting. Lucky to be blessed with friends like these, why we need enemies anyway LOLL. Looking at the google map, but having no confident on it that it’s the right one, it gives a relief when a local directs us to the path to our destination. It usual to see monkeys climbing a house or a tree, but it’s not every day, that we see some monkeys dressed up like us trying to climb a dam, was a sight for sore eyes. We do need energy while we walk, and what better than some glucose and water (ahem ahem).

Now what’s a journey without any obstacles? It wouldn’t be fun at all! Rain decided to give us a visit and teased us, delayed our journey and thanks to it, our paths were so not easy to walk on. It was muddy and slippery. we also made friends with some leeches, never liked parasites, but never knew I hate this kind the most. I cursed it so much, when it went inside my shoes. As I said, why need enemies when have friends so cunning, one of those situation can best be expressed by Nabindra dai. Never seen anyone so hyped up, while being asleep at the same time.

Now what’s a journey without any obstacles? It wouldn’t be fun at all!

We also had some ghostly encounters, but the ghosts were not so scary, too bad. We all know that dogs are loyal, but a stray dog! It followed us from the start of the journey on the 2nd day till we reached NamoBuddha. Just so happy and a kind gratitude for the biscuits. With a light breakfast and a long journey, we were so hungry, on the way back, we went for a good Thakali meal. We went in 13 people for the lunch, but came back 12. Someone was so blushed that he didn’t want to leave. Could the food have been so tasty or was it something or someone else, I’ll keep that a secret for now. He wasn’t ready to leave the restaurant yet, we did have to drag him out though. All in all, it was a hike to remember. I look forward to go to a journey like this again.