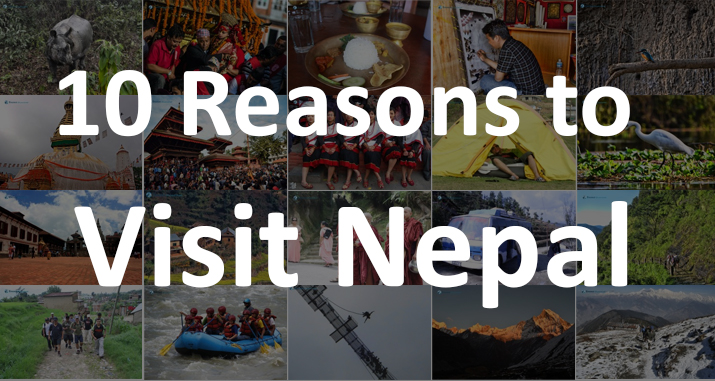 Nepal is noted as roof of the world and is a country of high mountains consisting 240 peaks each exceeding 6,094 meters. Nepal is well known for Mount Everest with largest share of the highest peaks in the world.

Nepal is a perfect destination for trekkers. Trek in Nepal take trekkers to virgin areas wherein visitors can cherish the beauty of the country and experience the lifestyle of different cultural groups living in far-flung settlements.

Home to 856 known species, Nepal is blessed with a vast array of exceptionally biodiversity of bird life. Nepal is destination paradise for every bird watcher. And you may encounter many in your way to Nepal.

Kathmandu, a city with largest concentration of historical icons and shrines. Kathmandu valley is surrounded by four hills and is home to seven UNESCO world heritage sites. This zones include
urban centers with palaces, temples, and the oldest known Buddhist monuments.

Two hundred lakes with glacier origin, known not only for their beauty but also for their spiritual importance. Many of the sites are National parks, Wildlife reserves, natural landscapes, rich
cultural heritage, and cities.

Nepal is country of non- stop festivals, a country of as many temples as houses and as many gods as people. It’s a ultimate destination of mysticism and exoticism city of golden pagodas
and parasols. Well known as melting pot of Hinduism and Buddhism, it is also the land of living goddess – Kumari.

More than 150 ethnic groups with diverse culture, tradition and lifestyle flourish in the land of Nepal. This place, known as the land of gorkha, has some of its villages situated in the greatest
altitude of the world’s.

Varied cuisine styles are based on their ethnicity and religion which has staggering varieties. Much of them are variation on Asian themes, others have hybrid Tibetan, Indian and Thai
origins. Many of the Nepalese handicrafts are influenced by different religion which are of age-old practice, produced in traditional way – from generation to generation. Some of them are
Pasmina, Thanka, Hemp, and cotton bags.

Visiting Nepal is reasonably affordable, one can get good accommodation and travel in a decent price. If you compare visiting other places to that of Nepal then it’s particularly cheap.

2 thoughts on “10 Reasons to Visit Nepal”